Eater Boston Waits in Line for Cronuts in NYC

Share All sharing options for: Eater Boston Waits in Line for Cronuts in NYC

Eater Boston is visiting Eater headquarters in New York today and felt compelled to wait in the infamous cronut line so you don't have to (unless, of course, you do want to wait two or more hours for a sugary croissant-donut lovechild). Here is a detailed timeline of the experience, starting a little before 6am, two hours before Dominique Ansel Bakery opens. 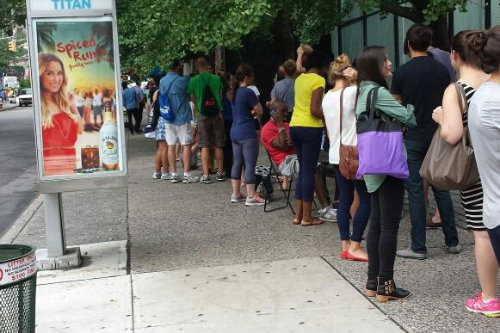 5:35am, Tuesday morning: Left hotel and walked quickly through quiet streets, wondering if the foreboding sky meant an impending storm — and thus a shorter cronut line.

5:54am: Live-tweeting the cronut experience...here we go. 5:54am on Tuesday, grey but not raining (yet). Six people in line in front of me.

5:57am: Half of the people brought a blanket or camping chair. Five women, one man. Everyone looks to be around late 20s, early 30s. (This demographic stays roughly the same as the line grows throughout the morning.) I stand awkwardly, almost leaning against a pipe on the side of the building while trying to avoid some gross cobwebs.

6:00am: A truck that must be regularly parked across the street is advertising advertising opportunities on its side. Good idea if your target demographic is cronut-crazed people who are willing to line up for hours outside of a bakery. 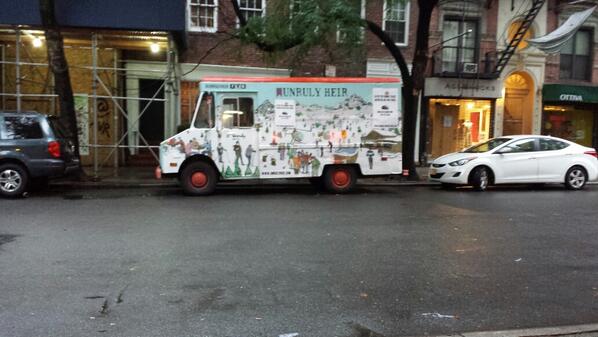 6:01am: Thirteen people in line. Figured there would be more by now. Regretting the early wake-up.

6:17am: The line is up to about 30 people, still not too bad. Lots of chairs, books, headphones. People who came in groups have the luxury of sending one person out to get coffee. One half of the couple behind me in line goes to their nearby apartment to pick up camping chairs. I seethe with slight jealousy for the next hour and 43 minutes, most of which I spend on my feet since the sidewalk is wet.

6:18am: No longer seventh in line. A few people have mysteriously materialized to join friends at the front. Hmmm. 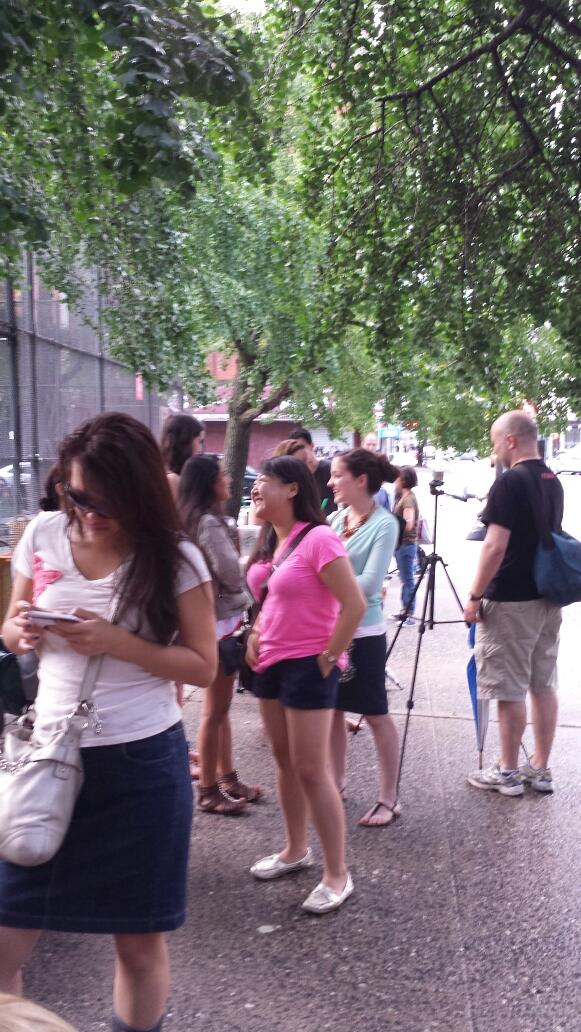 6:27am: With just over 90 minutes to go, the line has reached the corner of Spring Street. The guy with the tripod (pictured right) said he was blogging and took lots of photos of the line (as did pretty much everyone else).

6:33am: With 87 minutes to go, every single person in front of me is sitting, either on a blanket or the stoop of the apartment next to the bakery. I contemplate the wet ground again and shift from one foot to the other repeatedly. I probably look like a five-year-old who needs to go to the bathroom.

6:37am: A jogger goes by, looking a bit like he feels superior to everyone in the cronuts line. I feel slightly guilty. The feeling passes quickly.

6:42am: The line is now wrapping around the corner. I'm again contemplating sitting on the wet sidewalk but determined to stay on my feet as long as possible. Standing counteracts a few cronut calories, right?

6:46am: Lots of cute dogs walking by are helping to alleviate the boredom. 75 minutes to go. Resist the urge to pet the most smiley French bulldog ever.

6:52am: Person near front of line is attempting to sell his spot to newcomers. I think he's joking.

7:02am: A guy driving by in a pick-up truck is shooting video of the whole ordeal with his phone while driving past the line. Safe. Less than one hour to go. An employee is outside greeting everyone, hearing people's stories. Later, she is the cashier that rings me up. A+ for friendliness.

7:04am: I'm not leaving the line to count, but another girl walked by saying that the current number of people waiting is 98. She took her place back up at the front.

7:15am: 45 minutes to go. Line is wrapping around two sides of a basketball court. Feeling some self-hatred for being here. Thinking about also ordering a frozen s'more, one of Ansel's newest treats.

7:25am: Too many photos being taken for this time of morning. Everyone's got a phone out. A reporter is interviewing people, and her photographer is shooting non-stop with a substantial zoom lens. Should have brushed my hair, maybe. 35 minutes to go.

7:40am: 20 minutes. Gave up on standing; sitting on the sidewalk, probably getting an embarrassing wet spot on my shorts. And it's starting to sprinkle ever so slightly...or maybe something is dripping on me.

7:45am: The final 15 minutes. Obligatory journalists interviewing people. Passers-by looking amused and/or disgusted by the whole thing. One woman asks what's going on. Someone tells her about cronuts, and she says, "What, are they passing them out for free or something?" When told that you have to buy them, and that people line up for hours to get one, she walked away completely incredulous.

7:55am: "People are dumb, but not this dumb," says one person in line, hoping that the cronuts are worth the hype. Another person in my vicinity says that the whole area smells like butter. Five minutes.

8:00am: They're not letting us in yet, but they are passing out fresh-baked mini madeleines that taste like heaven. All is forgiven.

8:02am: The first batch (including me) enters; we're politely instructed to head towards the back and snake the line through the narrow store. There's no rush now; each customer gets plenty of individual attention, and most people order more than just cronuts.

8:10am: Made it! I get my hands on two cronuts, a frozen s'more (toasted in front of me), a DKA (Ansel's version of a kouign amann), and a pack of lemon meringues — had to get something that would survive the trip back to Boston, as the cronuts would definitely not fare well.

8:15am: Tackle the frozen s'more in the bakery's "garden" area. By the time I finish, they're only just letting in the second batch of people, and I'm covered with marshmallow.

8:35am: Arrive back at hotel. Open cronut box. Die a little inside because wow, that's a lot of sugar. And butter. And cream. Start eating. The whole frosted top comes off in one overwhelming bite. Overwhelming in a good and bad way at the same time. I continue to eat the cronut a little bit at a time throughout the rest of the morning.

8:45am: Conclusion: cronuts are enjoyable. Not quite worth the wait (or the two horrific mosquito bites I picked up while waiting). Boston doesn't need cronuts — no one needs cronuts. But a fun adventure nonetheless.
· All coverage of cronut madness on Eater [~EBOS~]