The newest addition to Ana Sortun's well-loved restaurant group (Oleana, Sofra Bakery & Cafe), Sarma, will open "this summer" in Somerville, according to the July/August issue of the Somerville Scout. Oleana chef de cuisine Cassie Piuma will be chef and co-owner of the new spot, located in the former Paddock space in Winter Hill, a brisk 10-minute hike from Union Square. The "friendly neighborhood mezze bar" will draw particular inspiration from Turkey, as well as from a wider Mediterranean and Middle Eastern radius, like Sortun's existing restaurants. Blueprints filed with the city of Somerville reveal a 113-seat capacity, 16 of those at a mezze bar. It appears that a 14-top (a communal table, perhaps?) and six smaller tables could be in the main room with the bar, while a smaller dining room is off to the left.

The Paddock's main entrance on the corner is a thing of the past, with Sarma creating a new entrance right in the front of the building (on the Pearl St. side), making the bar room the center of attention. It looks like the previous imposing brick facade and tiny windows will make way for large windows, and a pretty pattern will be painted on the outside of the kitchen. 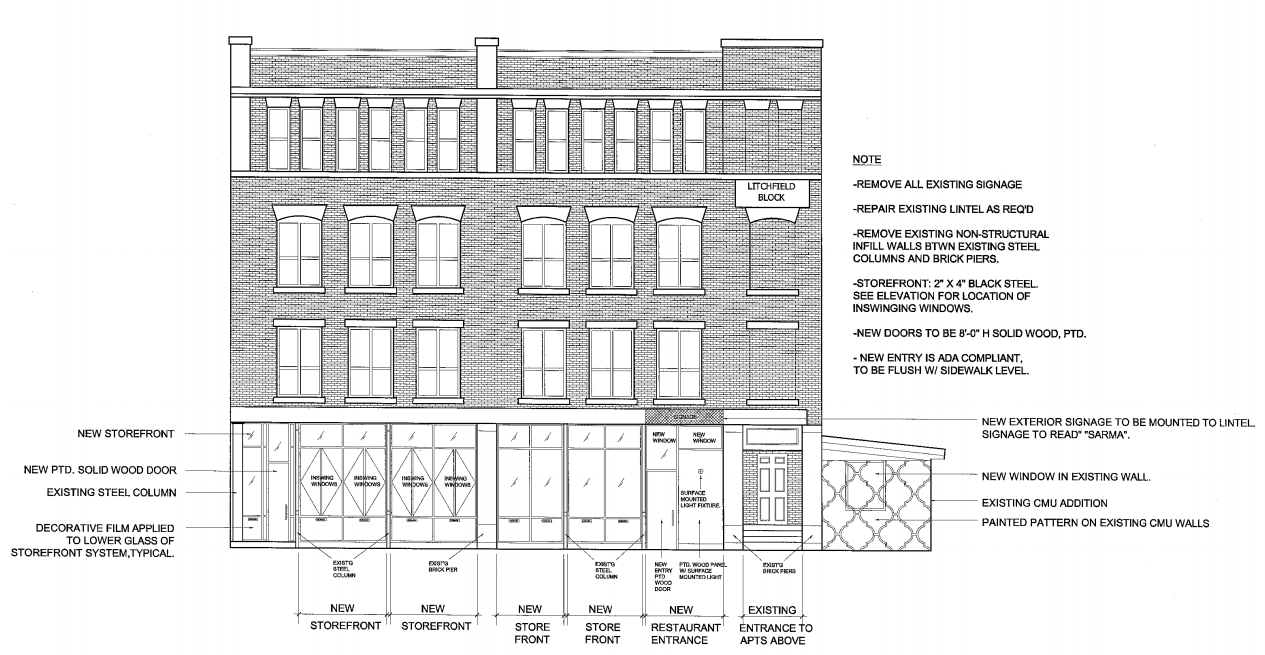 Southie-based C&J Katz Studio designed the space. The firm also worked on Sofra, as well as most of Barbara Lynch's empire.

As for the food, Piuma told Boston Magazine back in May that the menu would include "a mix of small mezze dishes and large platters that servers will bring from table to table (like tabblouleh and fattoush salads, large racks of lamb) that diners can elect to partake in a helping of for an additional price." The name Sarma refers to stuffed dishes in Turkish cuisine, such as grape or cabbage leaves stuffed with meat or phyllo dough stuffed with a sweet, nutty filling.

Piuma and Sortun's working relationship began a decade ago when Piuma, then a recent culinary school grad, wrote a letter to Sortun about her experience dining at Oleana, and that letter landed her a job offer. "We have a really symbiotic relationship," Piuma told the Somerville Scout.
· Blueprints by C&J Katz Studio [SomervilleMA.gov]
· Taking inventory: the spice-filled kitchen at Oleana [BM]
· All coverage of Sarma on Eater [~EBOS~]