Share All sharing options for: Beverage Pros Weigh in on Burger Pairings

Eater asked three beverage professionals to share their thoughts on pairing burgers with drinks. O Ya co-proprietor and sake sommelier Nancy Cushman, Oleana wine director Lauren Friel and Ten Tables and Grass Fed beverage director Stan Hilbert all weighed in on everything from Japanese whiskey to Miller High Life. See below for their recommendations. 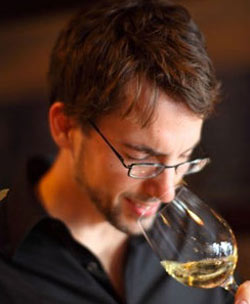 At Ten Tables, we've got a lot of things with a smokier element. Some things are a little sweet, a lot of savory notes. When we're talking about higher end burgers, we've got all those different flavors there. That's why I like to pair that with something like a Mencia, that shares those qualities and ties everything together. That's a wine I really like that has all those notes with a smokey, sort of barbecue thing going on. Any wine that has those notes would work well. Another wine that's great with the burger is the 2009 Bujanda Rioja Crianza.. It's aged in oak, it's nice and round, and it shares that sort of smokey flavor but is also very big and bold and really pairs well with something like that. That's usually what I recommend with the burger.

Or you can just contrast it with something really refreshing. That's why you might go for beer. For beer, IPA works really well, and if you like things a little lighter we have Beer of the Gods from High & Mighty Beer. At Grass Fed we don't really do burger pairings. PBR: that's what I do.
[Photo: Official Site] 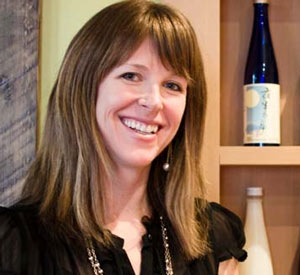 I thought it would be fun to do something Japanese, a little outside of the box yet still familiar, as far as what to pair with a burger. Beer I feel is always, like, the number one pairing with a burger. Sorachi Ace is really really good, really refreshing. What makes it interesting is that they use Japanese hops. It's made by Brooklyn Brewery and is a saison farmhouse style ale. It has a really refreshing, sort of lemon grass and citrusy note to it, so it would be really nice to cut through the richness of a burger. Great for grilling outdoors in the summertime.

Of course whiskey and burgers love each other. For Japanese whiskey, something kind of fun is the Yamazaki 18-year aged. It's a single malt and it's aged in three different kinds of barrels: mizunara - which is oak - French sherry casks and American bourbon barrels. It's a pretty straightforward whiskey flavor but at the same time there's some different, interesting notes going on. There's a nice smokiness to it, a little earthiness and woodiness. And then the palate has really nice deep cherry and chocolate. That would be really solid for a heartier burger.

I have to include sake, as always. Cedar sake is something a little off the beaten path and is aged in cedar casks. It picks up a bright, cedar note and also a little white peppery note, and that's the Ichinokura Taruzake. If you ended up grilling the burger with any additional kind of smokiness, like hickory chips or even on cedar planks, it's a nice match for that, kind of mirroring the smokiness.
[Photo: Rachel Leah Blumenthal] 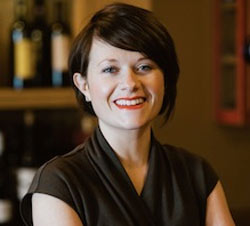 For me, as a beverage professional, what is sometimes even more important than creating a whole flavor profile when you're doing a pairing is really creating a mood, or playing to a mood, or recognizing how mood plays into the success or failure of a pairing. I generally consider the occasion and even things like the weather or the age of the guests, or if they're celebrating or something like that before I start to think of what flavor profile I'm going to try to accomplish. So in that regard, what's a burger? A burger is indulgent and fun and playful. A burger is not something you're studying: this is just something where you're out with friends and you need something really refreshing in between wiping the grease off your chin.

Obviously a lot of people go to beer, but in a wine world, we have what I often refer to as picnic wines, which achieve the same kind of mood as what a burger is all about. And for me, the pinnacle of those wines are what are referred to as a Petillant Naturel: they're a French sparkling wine category. They're often referred to in short in pet-nat, and they're almost like adult soda. They're alcoholic and everything, they're sparkling, but they're often lower in alcohol and you can drink with abandon and not have to worry about it. They're delicious, they're fresh and clean and refreshing, so they counterbalance the fat in the burger. And they're just joyful. And fun. And indulgent. Anytime I'm going to a barbecue or something like that, I always bring a bottle of pet-nat with me. And people are always like "This is so good! It's sweet and fruity and crisp!" It's good stuff.

The 'naturel' refers to a lot of things. Sparkling wines are actually some of the most adulterated wines that you can purchase because they're so finicky. There's the introduction of commercial yeast strains, stabilizers and synthetic acids, or the acidification processes that are introduced. The Petillant Naturel makes a statement that there are no additives, stabilizers, chemicals, commercial yeasts or non-naturally occurring sugars in the wine.

And the good thing about them too is that they're from overlooked regions of France, so they're really inexpensive, and they're also appropriate in that regard for pairing with a burger. In the Loire Valley you have Chateau Tour Grise, and Zero Pointe is the name of the wine. They make a white and a rose. Those are awesome. From the Jura, which is another fantastic, fantastic region for Petillant Naturel producers, there's Bornard, who makes a wine called Tantmieux. That's like a really awesome, more herbal expression. So if you have a burger with mushrooms or any earthy component like that, that's really good to go with. There's a domestic producer too who does a really good one. They're from California and are phenomenal:Donkey and Goat, in El Dorado County. They're an all-natural and biodynamic wine producer. The name of the wine is Lily's Cuvée, and it's a chardonnay. It's killer. Really, really good stuff. That's for your avocado California burger.

Unless you're going to knock back some High Life, which is the other go-to.