One Year In at West Bridge: Part Two

Welcome to One Year In, a feature in which Eater chats with the chefs and owners of restaurants celebrating their first anniversary.

Share All sharing options for: One Year In at West Bridge: Part Two 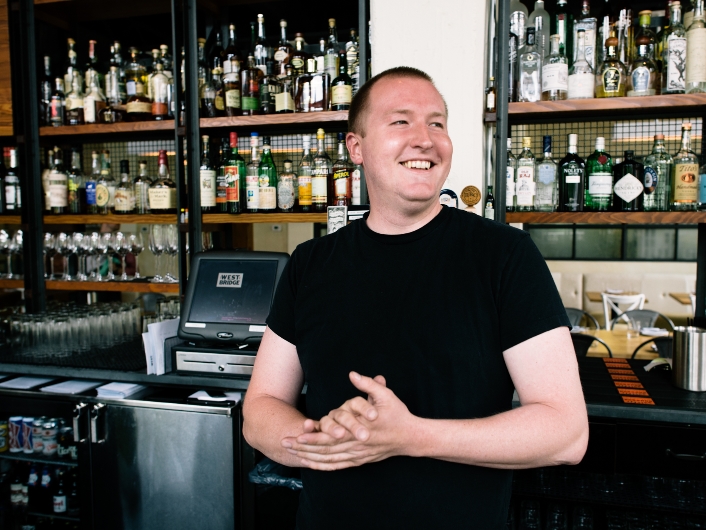 In part one of our West Bridge One Year In interview, we noted the many accolades owners Matt Gaudet and Alexis Gelburd-Kimler have received for their food and service. Their bar manager Josh Taylor, formerly of Eastern Standard, has accumulated his share of honors as well. He's won cocktail competitions sponsored by Galliano and Licor 43, been named to Zagat's 30 Under 30 list for influential figures in the Boston culinary world, and had his bar program dubbed "probably the best in the vicinity of Kendall Square" by food critic MC Slim JB. Eater spoke with Taylor about his first year behind the stick at West Bridge, using fresh ingredients to make better cocktails and save money, and what happened when he received his first order for a mint julep on opening night.

Before West Bridge, you had been at Eastern Standard for a long time. How did Matt and Alexis get you to come over here?
It's a good industry story. I was living with Nicole Lebedevitch (now of The Hawthorne, but then also at Eastern Standard). Alexis and Nicole are good friends. There were a few late nights of hanging out in the Eastern Standard kitchen after work. We started talking, which happens often, but rarely comes to fruition, but this time it did. It just seemed like the right decision at the right time. We all feel pretty lucky the way it's come together. I'll be the first to admit when I first saw the space a year and a half ago I walked in and said, "this is going to be a restaurant?"

How has the cocktail menu evolved since you opened?
When we first opened, having never conceived a full cocktail menu, I wanted to make sure we hit on all bases. I had an intense stirred cocktail, a pretty nice light cocktail, a vodka drink, a rum drink, a gin drink, and so on. Two months in we saw what we were and weren't getting calls for and started adjusting accordingly. It's really been a fun cat and mouse game where I think I know what people want and then I put it out. Sometimes I think it's going to be a big hit and then it's a total dud. The advantage about a restaurant this size as opposed to where I was coming from is at 1 o'clock, if I decide I want to change the menu, I can do it for dinner service that night. That allows us to work with not only what the guests are asking for but also if we're inspired by something that came in yesterday and we want to make something and it works, it works.

I hadn't thought that, to you, this is a small restaurant.
{laughs} Yeah, I'm very glad to learn a lot of the management procedures and techniques on this scale as opposed to at Eastern Standard because it's such a behemoth of a place. It takes a lot of dedicated people working together to have any successful restaurant, but there are so many more things they have to worry about than an average restaurant thanks to their size.

How would you describe your cocktail menu to a would-be customer?
I always thought it should be playful and fun, and I think that it still is. I'm not one for taking myself too seriously so I'm not going to get uppity about any cocktail at all. I always want the experience to be fun, and they should be able to come here and get something they can't get anywhere else. We're making a lot more things now: syrups, infusions, bitters. We had always planned to do that. It's a way for us to put our own signature on it and cut costs using fresh ingredients which is something you hear about all the time in the kitchen.

What's an example of cutting costs with fresh ingredients?
We were shown a rhubarb liqueur about a month ago, during the heart of rhubarb season. And it tastes great, so why don't I go and buy rhubarb and make my own shrub? They wanted $30 a bottle, and for $15, I made three bottles of it. It will keep forever.

What did the first day teach you that you hadn't planned for?
I put a mint julep on the menu but it turned out we were literally not ready for it. The first order came in and I realized we had no way to crush ice. Also, coming from such a big place, I had three bartenders scheduled every night for the first two weeks. It became very clear on day one that three people behind this bar is one too many if not two too many on a Monday night. That changed and we've all gotten better as a crew over the past year; we don't necessarily need two people on a Monday night anymore. Business level has gone up, but our general team attitude and understanding has gotten so we can trust one guy to take one night. That element of trust has increased 10-fold.

When did you take your first night off?
I dunno. I'm always here mentally. Alexis made me take a day off 2 or three weeks in. She forced me to.

You opened with sparkling wine on tap. Is it still available?
Not right now. We're currently pouring a still rose wine. My goal is to have five beers and one not-beer. We've had prosecco, cider ...

Cocktails?
I wouldn't rule it out. It's a technology thing we'd have to sort out. We could use vermouth in a cocktail and put it on draft.

Have the cocktail nerds followed you over the river?
Yeah! Initially, it was you were coming here either for the food or the drinks. And then, whether someone came in and had a great time and told their friends or read something like you're writing, the word got out that you can actually get good drinks and good food and be comfortable and happy here. That's really what we want. I think chef would say the same thing. Yes, we want the quality to be top caliber, but mainly it should be a place where people just want to hang out.

Are you experimenting with anything right now?
My favorite drink in warm weather is a highball, so I'm playing with taking that format and bringing high level cocktails to it. Name some silly drink like an Alabama Slammer or a Blue Hawaiian, one of those silly drinks that are really sweet and fruity and I might play on that.

So does it feel like a year?
On one hand, yes. On the other hand, totally not. I've said it before. All of us who work here have all spent a lot of hours here the past year, but we still have to remember there are a lot of people who have never stepped foot into this restaurant before. As much as we feel like "yeah, we're in, we're established and we're a thing now," there's still people who've never been here. We have to make sure their first visit is as important as someone else's 50th.