Welcome to Lifers, a feature in which Eater interviews the men and women who have worked in the restaurant and bar industry for the better part of their lives, sharing their stories and more. 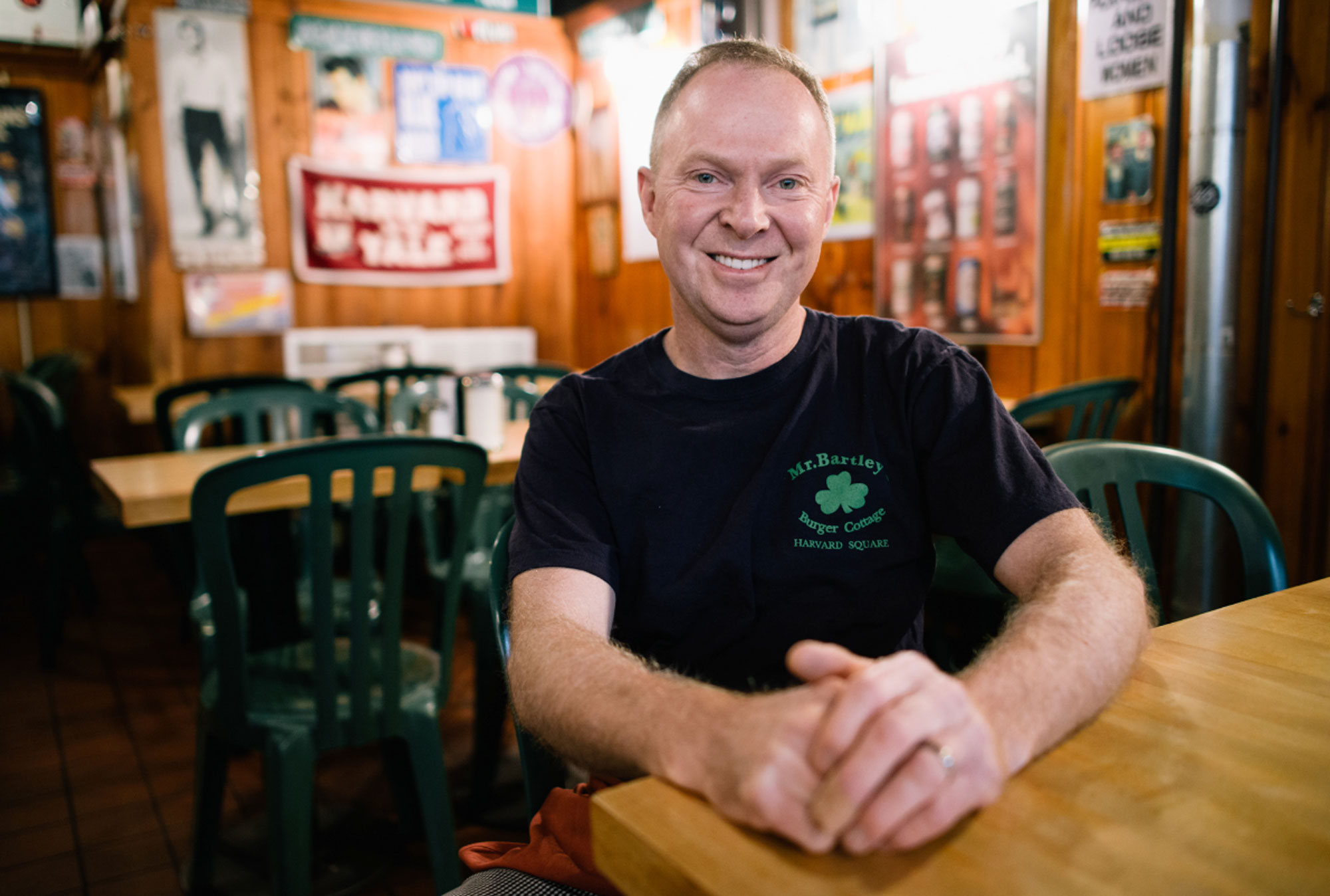 Bill Bartley is the general manager of legendary Harvard Square hamburger destination Mr. Bartley's, which has been in business since 1960. Bill's father Joseph is still the restaurant's owner and comes in every day, though Bill has been working here since he was thirteen years old, in 1974. Eater spoke with Bill about his years making burgers and about how he feels about the new surge of burger popularity.

What jobs have you worked here throughout the years? They jettisoned me to the grill. I was kind of like the beef cow - they kept me in a confined area so I wouldn't get too big. My older brothers just didn't have it - just couldn't cut the mustard - so they were relegated to dishwasher and fry cook. They just didn't have it upstairs, I think.

Are they still there? No, like I said, they just couldn't cut the mustard. One's an accountant and one's a basketball coach. You know what they say, those who can't do, coach. No, he's actually pretty successful at WPI [Worcester Polytechnic Institute].

What's your favorite burger on the menu? Toppings have gotten to be our thing. We have really an endless amount of toppings what with combinations, something like fifty-plus toppings, but I really like a basic burger, with onion rings.

Do the onion rings go on top? No, just on the side. We make our own; they've pretty much been a mainstay for over fifty years.

What's the most popular burger? Right now, I would say the Gabriel Gomez is really popular: bacon, cheese, grilled onions, jalapenos. I'd also say the Viagra. Blue cheese, bacon - and you can get it with sweet potato fries or onion rings.

How did the Viagra get its name? It rises to the occasion; that's how it got its name.

In all your years, what burger has been the most popular? That's a tough one. As far as the most sold, it would be the Viagra, only because it's been on the menu for thirty years. The Ted Kennedy was on for a long, long time, but it's not on anymore, so it's not putting up any numbers anymore. The Viagra still is. It changes, and sometimes the name drives the sale. I think the best example of that was the Scott Brown. I've never put a burger on a menu where it was so ridiculous how much it sold. It was just insane. But all time sales, Viagra's probably going to win. On a daily basis right now, the Mark Zuckerburger probably sells more than the Viagra. That's boursin cheese and bacon and comes with sweet potato fries.

What was on the Scott Brown? Similar to the Gabriel Gomez: bacon, cheese, onions, jalapenos. Rings or sweet for French fries. Before he won his first time, we put that on and that just sold like crazy. Gomez, people are really excited that he's on the menu, but we haven't been picking winners lately, so I told people they shouldn't be too excited. We've been picking the losers lately!

How often do you add a burger? Whenever the mood strikes. It's got to start with a good burger, and then a witty tagline, and it's got to go from there. We do not accept customer suggestions, though. People go "I have a great idea for a burger!" And I say you have a great idea for a burger? Then you need to do what I do. You have to get here Monday around eight o' clock, you need to work all week, and then Saturday around eleven o'clock at night, you get to pick out a burger. They're always the worst ideas too, like funny to them. Oh great, that's what we need - inside jokes.

Can you give an example of a bad suggestion? We just had one the other day. It was a kid, I think he had a gluten allergy, so it was all about a burger with no roll, which is fine, and we actually have a burger with no roll, which is on top of a spinach salad, which is really popular actually. But the tagline was just his name. I was like, no, kid, it's not working. Start a blog, buddy, start a blog - nobody wants to hear it.

Where are most of the tourists coming from? All over the world. It's definitely a strong influx of Asian tourists. We're very popular in Japan specifically - we've done a lot of TV work in Japan. I mean Harvard Square is the hub of the universe. You really do see everything. There's a lot more Latin Americans than I can recall in years past. For some reason on Friday afternoons there's a ton of Latin American kids. They all come to meet here and all know each other; I don't know what school they come from. Summers are definitely an influx of American tourists, especially from the Southern parts of the United States.

What do tourists tend to order? Tourists are nice because they go all out, there's no holds barred. We're truly a destination for them, and they order everything. They're going to get sides, burgers, finish off with frappes.

You've been around so long, and burgers are so big right now, how do you feel about this new wave of burgers? There's nobody out there that buys the quality of meat that we buy. A lot of them use frozen patties. There's no way they can compete. The system, the technique that we use - they're not paying people who have the skill set to do it. I mean, I do it. That's what I'm going to do today. I've been doing it for forty years now. We've got a proven product; we know how to do it. Most people with my skill set, they have someone beneath them deal with the burgers. A lot of chefs are getting into burgers, but they're not doing the burgers. I watch them, and I'm like, you don't anything about burgers! A lot of them are making meatloaf and putting it on a bun.

The other thing that we have is, because we use so much burger and we consistently use so much burger and we have for so many years, we can call the shots. People want to sell us burger. We can say this is the way we want it. A lot of people talk about hand forming; we have a machine downstairs that patties them up - we never have to touch the burger. People handle a burger, it's crazy, all they're doing is taking taste away. Handling them is the worst thing! If you can do it without touching them, they're better off. We barely touch our burgers. It comes off the machine, it's taken with a glove and put onto a tray, and it goes on the grill. As opposed to everyone else that's manhandling their burger and calling it handmade or hand-formed, we're doing just the opposite. We're cooking over high heat on a flat top. A lot of people are using a char grill, and that's just drying the burger out. You can watch the juices drip away. That's not what you want. I think a hot dog needs a chargrilled taste, a burger does not. A good burger is better than a good steak: the marbling is perfect, you don't need to age it because the taste is all there. A little kosher salt is all you need.

So you're on the line making the burgers every day? Absolutely. That's what I do. I have containers and containers and containers full of write-ups. We can't even hang them all on the walls. We have ones that date back 50 years. We've been on every major network, we've been in movies. We're in the Facebook movie. We definitely know what we're doing and we're committed to it, and we're not interested in opening a bunch of Bartley's. We're committed to this one Bartley's. I'm not interested in franchising it to some guy who used to be a computer software engineer and wants to be a restaurateur. That's not what we do. We do this and we do this well. On all the other chains, it doesn't take five guys to make a burger, it just takes one guy.

How have things changed since you started? In some ways not at all. We always were a busy place, it's a good location. Now it's just crazy. I think that Harvard University had a lot more, our business was more tied to them, and now it's not at all. The school calendar has nothing to do with our business. We're truly a destination, and that's probably the biggest change. People come to Harvard Square to come here. Before, we were a busy place in a good location. The menu's changed a lot, too. Our food used to be a wider variety, more diner. We don't have as many people that live around us as we did before. We had people that used to eat here twice a day. And that definitely has changed a lot. We still have a wide variety of dinners and salads and sandwiches and stuff, but not like we did. I kind of miss that to a certain extent. We have the burger thing down, and we're always trying to improve it and we do, but cooking a nice beef stew is a nice challenge, and we're not doing that on a daily basis anymore.

Do you ever eat burgers anywhere else? No. It's just too disappointing. You can't order a burger the way you want it - it's just ridiculous to me. The chains started doing it because they couldn't cook them to temperature anyway, but now places that tout themselves a burger place and they can't cook them the right way? That's my whole life. That's what I lose sleep about, getting it the way someone wants it. If I can't go in there and say I want it medium rare and get it medium rare, then you're not a burger place. You're just fast food. I don't know what you are. They make money, so good for them, but there's lots of ways to make money. To do this for fifty years, you have to really believe in it. What really drives me to do it is there's never a day where you get it all right. It never happens. You do 800 burgers, you don't get all 800 right. So next day you try again. Striving for perfection - to me, that's what the restaurant business is.
· All coverage of Mr. Bartley's on Eater [~EBOS~]