Where Eugene Mirman Likes to Eat in Boston

Share All sharing options for: Where Eugene Mirman Likes to Eat in Boston

Welcome back to Comedian Confidential, in which Boston comics (or at least those with Boston roots) discuss their favorite restaurants. 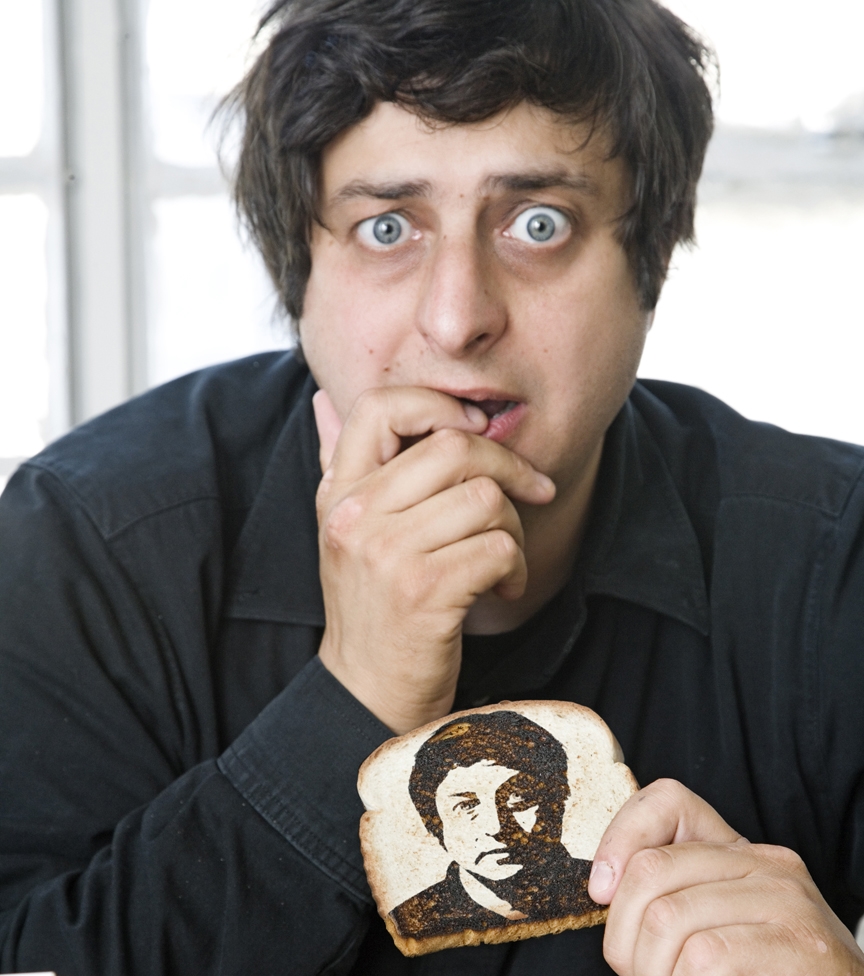 Actor and standup comic Eugene Mirman brings his comedy festival to Boston's Wilbur Theater and Cambridge's The Sinclair on June 28-30. Eugene grew up in Lexington and lived in Boston in the late 90s as he was starting his career. He voices Gene on Bob's Burgers and knows a thing or two about real restaurants, as well. Eater spoke with Eugene about pig's head at Craigie on Main, working at Toscanini's, and the Kickstarter that could pay for a pig roast in Harvard Square (if it's legal).

When you were growing up, were there any restaurants your family went to for a special occasion that made you discover restaurants were something you loved?
It's funny, as a kid I didn't really go out to eat a ton. We'd go get Chinese food in downtown Lexington, like Yangtze River, which actually is one of my Kickstarter rewards: I'll give a tour of the green and then we'll go get the buffet as I used to as a kid. I feel like we didn't really go out to eat much. I don't think I would call the Burlington Mall food court a special occasion. I think it was a handful of Chinese restaurants around the Boston area. A lot of stuff that was great and really fun, but not anything that I'd feel like saying, "you've gotta check out Jimmy's on the Mall at Burlington." If that's still a thing. I bet it is not. [ed. note: It isn't.]

No old sub shop you have to visit every time you come home?
There was a place called Alexander's that had subs that I would get when I was a kid. But I also loved McDonald's. I mean, I was 10. I loved McDonald's a lot. It probably wasn't until college or later that I discovered some places made really good food, though Chinese food is really pretty delicious. Like I REALLY loved McDonald's. But I'm not going to tell you that you should tell people to go to McDonald's. Not to say they don't do a good job with french fries.

I'm pretty sure you served me when you worked at Toscanini's in the late 90s. In college, we used to hang out at the one in Central Square next to Pu Pu Hot Pot.
Oh yeah. Right! #1 Scholar's Eating Place. I forget if that was the literal translation or what they were going to call it.

Yes, it was the literal translation. In fact, they just changed their name this week.
Their worst mistake was not calling themselves in English "#1 Scholar's Eating Place." They have no idea how much money they would have if they had done that. And that's a true shame. Working at Toscanini's was great. I worked at the ones at Harvard, Central, and the one in the MIT student center. Working there was awesome. It was a very fun environment. I needed something like $260 or $300 a month to cover rent so I worked six hours a few times a week at Toscanini's and then I had the weekly comedy show at the Hong Kong in Harvard Square I'd make a little at. Gus [Rancatore] was great. That whole place was fun. My favorite flavors were nocciola and burnt caramel.

I've seen you tweet at both Toro and Craigie on Main asking about reservations the last couple times you were in town. Were you able to get in?
They're both great places. At Toro, we went early enough there wasn't a crazy wait. Same thing with Craigie on Main - they were full on reservations, but we could sit at the bar and get food. Both places are amazing. We had the small half a pig's head at Craigie on Main which was one of the most delicious things I think I've had.

How do you find about places when you're on the road, either Boston or elsewhere?
A lot of it is word of mouth from friends basically. I have a few friends in Boston that I love going to places with who will make recommendations. I have friends that run the Sherman Cafe and Market in Union Square. My friend Ben Dryer built Journeyman. I've not been to Journeyman, I really want to. But I've been to Backbar, which is fantastic.

Any other Boston restaurants on your list that you need to get to?
I might try to go back and bring people to Craigie on Main because it's in Cambridge. I went to Uni once, which I really adored. I met Jon Benjamin [voice of the title characters in Archer and Bob's Burgers and guest at Mirman's upcoming festival] at Chez Henri. I love getting dim sum at Winsor Cafe.

Your Kickstarter for your comedy festival ends on Friday. Any last minute appeals to the masses as to why they should kick in?
No. Only if they feel like it. There are certain things like a caviar sponsorship that we're offering where we'd give out, at some shows, caviar to the audience. If you're a company, you should totally do that, because we'll constantly mention your name and that you bought caviar. Or if you're some wealthy person. I think that if someone buys the caviar sponsorship, they'll be mentioned in media all the time.

I'm going to give a tour of the Lexington Battle Green and then we'll go out for lunch. So far one person has gotten that. If that sounds fun to someone else, you should do it. I hope someone buys the trash bag for $1250 that lets them into every show and they wear it to a show. They'll be heroes to me. I don't think anyone will do that, but I would think that person or company was amazing. I wouldn't want anyone for who it was a hardship to buy that bag. I wouldn't want them to be like "Well, it's fine, our kid doesn't have to have all these books. Instead let's get a VIP trash bag."

What we're going to do with the money is pay producers and cover travel and do silly things like build a cardboard VIP room and hand out caviar. I really want to have enough money to rent a baby goat for people to take pictures with. That's a thing that might actually be hard and a little expensive. We'd also have to find out if it's legal. When we've done this thing in Brooklyn, we've had a petting zoo outside of a show. One year we cooked the same animals that were in the zoo. Not literally the same animals, but the same kinds of animals.

From your role on Bob's Burgers, when you go out and get recognized, do chefs try to send you their burgers?
People do ask me what my favorite burger place is in general, but it's not like I'll go to Uni or something and have someone say "here is the yellowtail burger." No one does that sort of thing. But people do ask what my favorite burger place is.

Ok, I guess I should ask what your favorite burger is in Boston.
I guess it would have to be Bartley's, right? It's next to the Hong Kong; I used to do comedy there. But, I don't go out for burgers in general, so I'd have to go to more places in Boston to know if it's the best or not the best. It also has a crazy line. Who waits in line? I would wait in line, but probably not for a burger.

Speaking of waiting in lines for food, you live in New York. Have you had a cronut yet?
A what?

A cronut. It's a cross between a croissant and a doughnut that Dominque Ansel invented last month that became an instant craze complete with scalpers.
Oh wow. I hadn't heard of that I'd love to try it though it seems like it will be impossible to get me one. Maybe when the commotion dies down I'll try it. I'd totally go to a place and put my name in and come back an hour later. But I was just in Portland and there was an hour and a half line for Voodoo Doughnuts. I'm sure they're extraordinarily good, but I don't think I could wait. Franklin BBQ in Austin is a place I remember waiting, but it may be the best barbecue in the country.

Anything else you'd like to share with our readers?
Feel free to let me know more places I should go in Boston, Cambridge and beyond.

Oh I think our anonymous commenters will be happy to help.
"You idiot, the best burgers are at the Brattle Theater!"

You're in for a treat at The Sinclair, though.
Yeah, I looked at the menu and I was very excited. One of our Kickstarter rewards is I will braid someone's hair while they eat bone marrow tater tots. How could that not be delicious?

Catch Eugene at The Eugene Mirman Comedy Festival at the Sinclair and Wilbur on June 28-30, and see here for his Kickstarter which ends Friday.
-Drew Starr

· All Coverage of Comedian Confidential on Eater [~EBOS~]