Share All sharing options for: A Day in the Life of The Gallows Fry Guy Alex Ramos

Welcome back to A Shift With, where we forego coverage of famous chefs, restaurateurs and GMs to get to know those who get dinner on the table outside of the public eye, like the morning prep cooks. 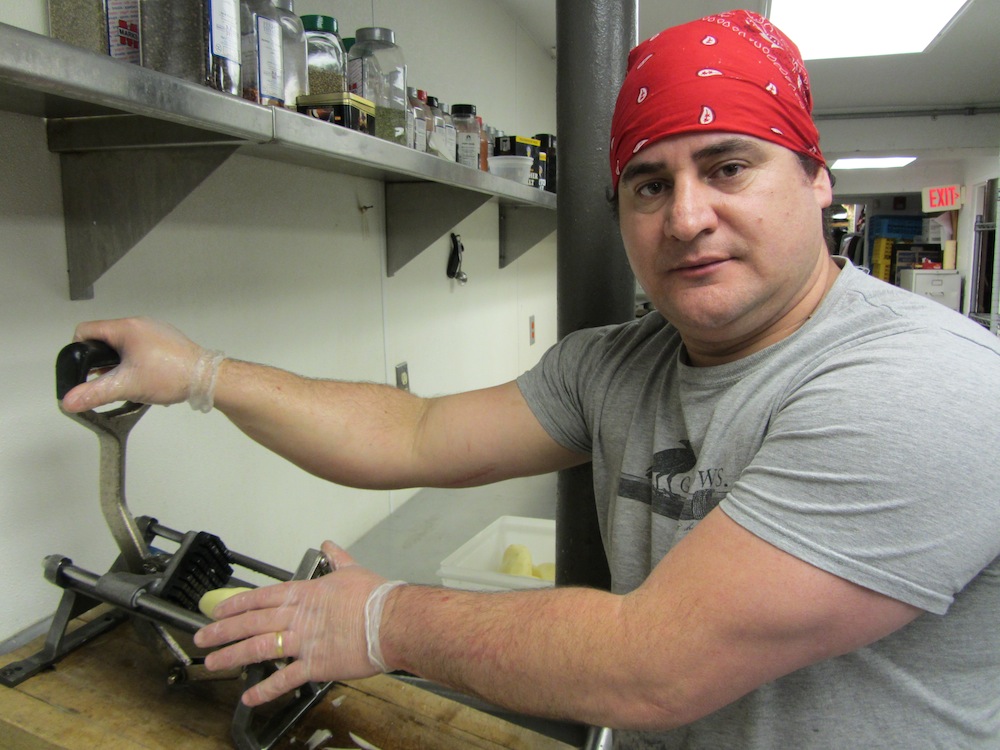 Red bandana tied snuggly around his head, Alex Ramos stands in The Gallows' prep kitchen on a Wednesday morning, peeling potatoes at a speed only years of handling sharp objects can explain. He slices, slices, slices and then flicks his wrist, suavely flipping the potato in the air as a cowboy slings a loaded gun, covering his cutting board with papery potato skin like fallen confetti. As morning prep cook, Ramos is the man behind the South End restaurant's notorious fries, which come poutine-style when not sitting beside a burger. Without Ramos, The Gallows fries wouldn't be hand-cut, twice fried or, for that matter, even possible.

At 9am, it's just Ramos and chef Seth Morrison prepping in the kitchen, where the mood is fluid and chill. Since the pair met working at another South End establishment, Erbaluce, Ramos has served as Morrison's right hand man. After working as a police officer in Brazil, the Portuguese-speaker moved to Florida and then to Boston, where he entered the industry as a prep cook. Now, he's an integral member of Morrison's staff and is entrusted with the keys so he can open at 6AM.

The fry-making process at The Gallows involves a seven-part process, and Ramos runs through six of those steps before service, taking the potatoes from rough and round to slick and slender. Each week, he pushes nearly a thousand pounds of peeled Russets through an antique French fry press, a cast-iron cutting machine that reckons each potato one-at-a-time in its gridded jaws. The crew at The Gallows uncovered the slicer in the basement when they arrived in 2010. It's been through at least three restaurants prior, and it's proved indispensable.

Once the fries are cut, Ramos soaks them in water with a shot of vinegar to let some of the starch run out. From there they have their first stint in the fryer for about seven minutes. The Gallows fries up Russet potatoes for their prime starch content, and you can feel how that starch has moved to the outside after that first fry. Come dinnertime, they'll only require thirty more seconds of cook-time before reaching crunchy perfection.

When all is said and done, the fries come splayed out on a plate of their very own, laden with fresh cheese curd, gravy and a slew of other toppings, depending on whether you opt for simple, out-of-control or veggie poutine renditions. And with one of The Gallows' eccentric burgers in your grip, these fries will be in good company.