Four Chefs on Their Most Memorable Burgers

Share All sharing options for: Four Chefs on Their Most Memorable Burgers

Eater asked four local chefs to reminisce about the pivotal burgers in their lives, whether good or bad. We spoke with Dante de Magistris of dante and il Casale, Lydia Shire of Towne Stove and Spirits and Scampo, Keith Pooler of Bergamot, and Tony Maws of Craigie on Main and forthcoming The Kirkland Tap & Trotter. Here's what they had to say. 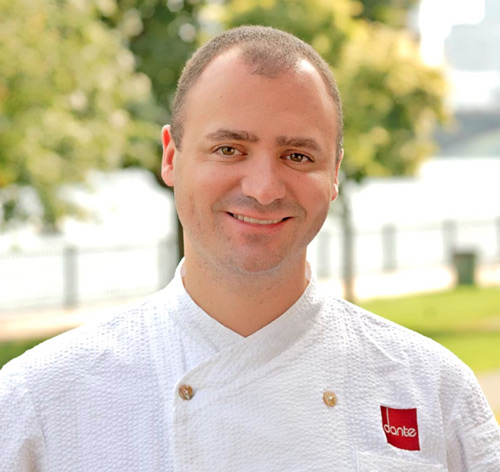 There was this burger that I used to get in Harvard Square - I can't think of the name of the place, it doesn't exist any longer - and this was probably twenty years ago, when I was a kid in high school. They had all different types of toppings, and this one had Russian dressing, bacon and bleu cheese, for some reason. And I liked it for some reason. And I always had to sneak there too, because growing up I was always eating healthy food. My dad never approved of eating a burger and fries.

Later, after working in Italy for about a year, I came back. And when I did, the first thing I wanted to do was to go eat that burger, because I was so excited to have it. I hadn't had it in so long. But once I was there, just the smell of the cooked burger and the grease was nauseating. For the past year in Italy, I was so used to eating very, very fresh food: mostly seafood and a little pasta and all sorts of real ingredients. And then I go and eat this, and I couldn't even eat the whole thing. I got sick. So I had to wean myself to start to appreciate burgers again after that experience. It's amazing what the body can do and how you get used to eating a certain way - and then going back to a nice, greasy burger. 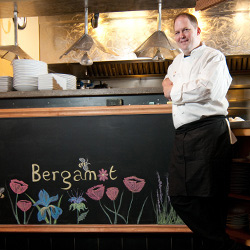 I was doing Meals on Wheels in California with Lydia Shire, right before I became an executive chef, so the world was still awe inspiring, just seeing all these cool chefs. Right after we finished there was a big chef's party. We all stayed out waaay too late and got waaay too drunk. We woke up the next morning, and I was so hungover. And what does Lydia do? She takes me to an In-N-Out Burger. After that I ended up wandering around aimlessly along the Santa Monica pier and just people watching, but the first In-N-Out Burger was pretty memorable for me. It reminds me of Five Guys a little bit, back here. There's my most memorable burger story. 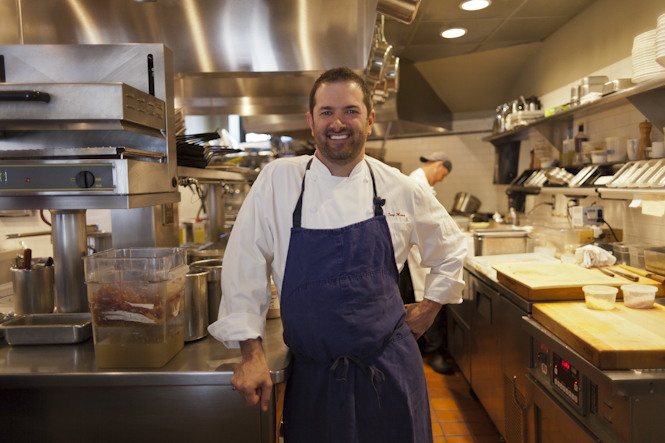 The worst burger that stands out is probably 96% of the burgers I've ever had. People, restaurants or burger makers, whether commercial or home cooks, look at this ubiquitous product of ground meat and just cook the bejesus out of it. That's not my idea of a hamburger. And that seems to be a common theme. Less so now: in the past few years obviously there's been this renaissance of hamburgers to the point where they're beyond shabby.

So I couldn't even begin to count how many bad hamburgers I've had in my lifetime. But the idea of having a burger that's actually seasoned well, that comes from meat that actually has flavor, that has a concept of some proportion of fat and meat to it. All of a sudden, you're dealing with something that has personality and potential. I don't think that you have to have an extravagant list of ingredients, but I think the point is that I don't see how you can, in my mind - and I'm obviously biased - have a good hamburger and have a cheap burger. I don't think that's possible. Because the meat's coming from some place that I don't even know, and I would never feed it to my son. I don't want it fed to me and I don't know what they've done to it and it has no flavor.

I will surely though admit - and I'm going to now do a complete 180 - I do miss the Tasty in Harvard Square. Which was probably more the time and place of being hammered at one or two in the morning and getting a Double Husky, which was this awful, greasy, double, slimy cheeseburger, and completely housing it. But that was a different time and a different place!

Right now, like if I could have any burger, one that I actually look forward to eating? I really enjoy the burger at Neptune Oyster. And I know that's probably not the first thing that a lot of people think of, although when I was there the other night they were already sold out and I was completely pissed, so obviously some people are thinking about it. They put fried oysters on the burger: it's actually good, it's seasoned, it's cooked right. If you order it medium rare it actually comes out medium rare, which seems to be a challenging thing for a lot of places. That's the other thing. Most of the time they either don't believe you when you order a burger to a certain temperature, or they just don't get it.

When we would make burgers as a kid, we didn't get super into our thing. I think sometimes we would put Lawry's Seasoned Salt in the mix, and our go-to bun would be an English muffin. Which I actually really enjoy. I really like a burger on an English muffin, because the nooks and crannies totally absorb the fat and the grease, and a good English muffin also has a solid tang to it. It's a little different than sourdough, and I think it goes fantastic with the richness of the meat. If I didn't do a sesame seed bun, I would absolutely do an English muffin. 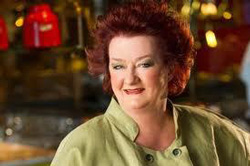 I love burgers. Doesn't everybody?

I remember when I used to come home from school when I was little girl, and my brother would be taking hamburger meat and putting it in a hot pan with Lawry's Seasoning Salt. Have you heard of Lawry's Seasoning Salt? Oh my god, it's fabulous. Basically there's a restaurant, Lawry's, that's out in Los Angeles, California, and they have this seasoned salt that they put on their prime rib. If you take hamburger and you just cook hamburger in a pan, you know, jumble it all up, and you put lot's of Lawry's on it, it's really delicious. It's two things: hamburger with salt. This seasoned salt used to have MSG in it, but they have since taken out the MSG. Personally, I think it was better with MSG. You know how people are nowadays.

I'm very adamant about a burger done in a hot pan, which develops a crust, and I put Worcestershire sauce on it just after it's finished cooking on each side, and it sizzles up in the pan. Once that Worcestershire hits the pan with the seared beef, it kind of caramelizes and burns a little and creates this maximum flavor that is delicious. And then of course I like my hamburger really rare. Practically raw: I eat it almost raw in the middle. Then I put it on a poppyseed roll, with lots of butter on the roll, and I toast the bun under a toaster or a broiler. I'm not a fan of cheese on a hamburger. I think cheese takes away from the flavor of the meat. Also, I like bacon. That's not to say cheese is wrong, I just don't like it. To me cheese doesn't add anything to a hamburger. Bacon and butter and Worcestershire is the way I love it.

Believe it or not, I had a burger at Jerry Remy's - the one on the fry bread - and I ordered it super rare, it came out just the way I liked it, and I thought it was delicious. Other than my own burger and the burger that we have at Towne Stove and Spirits, which is my burger, I think the next best place to eat a burger in Boston would be Jerry Remy's. Back Bay Social Club has a great burger. I think their's is delicious. I think the Four Seasons has a delicious one. But when I really want a burger, I like to cook it myself. I don't do ketchup, by the way. I did not grow up with ketchup. I'm a Worcestershire girl.

Scampo at The Liberty Hotel