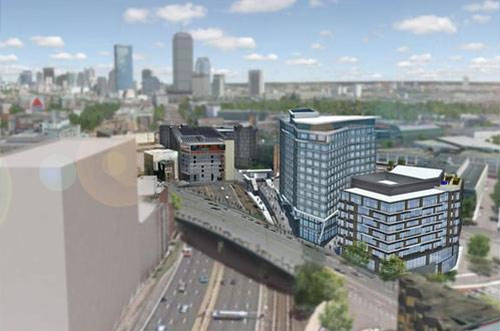 [Fenway Center Phase 1 via The Globe]

FENWAY - The oft-stalled Fenway Center, that five-building exclamation point over the Mass. Pike with more than 500 apartments, appears to be on again. The state has reached a deal with the development team led by John Rosenthal for the 4.5-acre site, around Brookline Avenue and Beacon Street, and the air rights above it. Construction could start by early 2014.
__
BEACON HILL - The 3,936-square-foot townhouse at 15 West Cedar Street near Louisburg Square has become the latest Boston home to ask at least $5M (there used to be a lot more). The Greek revival dating from 1837, with what the Campion & Co. listing calls a "storybook patio and garden," hit the market on Monday for $5,500,000.

__
ALLSTON - The new dormitory pitched for 1047 Commonwealth Avenue might, in fact, be micro-apartments in disguise: Of the 220 units, six would be 316 square feet each; 108 would be 340 square feet each; and 106 would be 240 square feet each. The developer, moreover, has declared them fit for "young professionals."
__
SOUTH BOSTON - The second phase of the Allele could add to the construction activity in that interior slice of Southie around West Broadway. The phase would plunk a six-story condo building of 30 one- and two-bedroom units on the site of a single-story repair garage. It would have 30 parking spaces as well and an approximately 1,272-square-foot retail space.