Welcome to One Year In, a feature in which Eater chats with the chefs and owners of restaurants celebrating their first anniversary.

Share All sharing options for: PARK Owner Patrick Lee on Year One 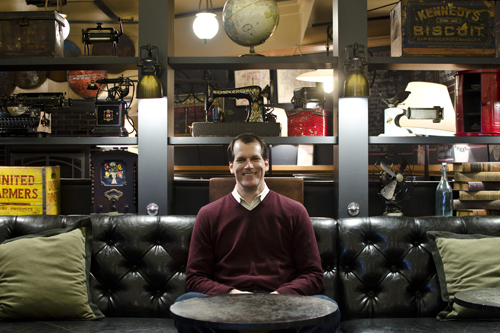 Two years ago, the Grafton Group closed one of its Harvard Square restaurants, Redline, to make room for a new concept. PARK opened a year ago in the garden-level, multi-room space, a cozy but elegant restaurant more in line with other Grafton Group properties, particularly nearby Russell House Tavern. Owner Patrick Lee chatted with Eater about how he has fared through the first year, from dealing with phantom glass shelf breakage on Friday the 13th to deciding how to give each of PARK's rooms its own identity.

So, does it feel like it's been a year? Yes. I feel like the first year of a restaurant has its ups and its downs, and there are lots of trials and tribulations. But overall, when you look back, it feels like a year - in a good way. And I kind of feel as though the years after the first year go by a lot quicker.

What do you remember about opening day? Not much. We had a couple of soft openings, and then we closed for a day, and then we reopened. I think it was a Thursday night, and because of our location, we're slightly hidden. It wasn't super busy, but it was busy enough so that the back of the house and the front of the house got a little bit of a workout. So my recollection is - even though I'm sure there were many problems that night - that it went fairly smoothly.

How did the idea for PARK first some about? We had owned Redline for many years, and probably for the last two or three years of Redline's existence, we wanted to turn it into a little more of a food-driven space. We always loved the space, we loved the location, and we just felt as though we needed to turn it into something a little closer to what we're doing at Grafton Street, Temple Bar, and Russell House. The space was exciting because, unlike our other venues, this one has different rooms to it. When you walk in, you don't see the space open up in front of you. You have to explore it a little, which is nice and was exciting for us.

How did you go about figuring out the decor for each room? How'd you decide that this is the music room, for example, and that's the classroom? Once we knew there were going to be different rooms, we wanted all of the rooms to feel the same in a certain sense, but we also wanted them to have their own identity. So, this being Harvard Square, we felt like some old photographs of Harvard Square and sort of that sixties, seventies rock 'n' roll generation counter-culture pictures would be fun to do. And then the classroom - we're obviously surrounded by not only Harvard University but many great colleges, so we felt like that was a nice little fit. There's so much great history around here that we felt like it would be easy to kind of put artifacts back there that would reflect that nicely.

How have you felt about the reviews, both professional and amateur, like Yelp and blogs? You know, we've been blessed. I think generally we've gotten very great reviews. We try to use reviews that we get on Yelp or OpenTable as constructively as we can. I think most restaurant people become very astute at reading reviews, and you're able to pick things out that are very helpful, and hopefully you can learn from them.

Any weird or funny happenings over the course of the year? We had something very shortly after we opened. You know, there's lots happening every day when you first open. There's lots of tension in a restaurant anyway, so to a certain extent it's the management's job to sort of break that tension and make people feel comfortable and excited about the night ahead. Friday the 13th, just after we open, right at 5 o'clock, I was at Russell House. I got a text message that said, "Come to the restaurant. Something's happened." So I just flew out of the restaurant, and as I'm walking, I'm calling PARK, and one of the managers answered and said, "All of the glass shelving behind the bar just broke." This was the shelving that held all of our expensive scotches, which was fine, not a big deal. But the shelving itself was very thick, and it felt in a very violent way. If anyone had been standing in front of it, they certainly could have been hurt very seriously. I walked in, and it felt like glass was still shattering. There were guests in here, and they were just sort of stunned. With that tension of opening and then something like that happening, it was a challenge for everyone to say, "Okay, that just happened. Let's clean it up and move on." So that was an interesting day. [Chuckles.]

Was there a moment during the year that you really started to feel like you were on the right track with the restaurant? I think there were moments along the way that we always felt like we were heading in the right direction. The management, ownership, the people that worked here - we really loved the space and we loved what was happening. And we just thought that if we continued to do what we were doing, eventually things would fall into place. That was probably around September. We kind of went through that initial period of six weeks when people were looking at the space, and then the summer, which is always a little slower around here. But then in September, we received a lot of positive feedback, so we really felt like our systems were in place, people were coming back, they liked us, and we were onto something good.

If you could go back to right before opening and give yourself a piece of advice, what would it be? One of the things that we've wanted to work out as much as we could was infrastructure. One of the challenges in Harvard Square and lots of other places is finding room for the restaurant to breathe and grow. And we didn't quite figure that all out, and I don't know if it was a possibility that we could have, but that's something that if we could do over, maybe...well, there's nothing that we could have done differently, but I guess it's a challenge that still remains as we're moving forward that we're always trying to resolve. So my piece of advice is to solve this problem that still exists [chuckles]...which we're working on.

If you were telling a friend who's coming in for the very first time how best to experience the restaurant, where would you tell him to sit, what to order?If you sit in the center of the bar in the front, you can look into the front room and experience that kind of rustic, taverny feel. And you can also look to the left-hand side and see that vaulted brick ceiling and get that sort of den feeling. So that gives you a great view of both sides of the restaurant, and you're sitting at the bar, so you're able to get some great service from the bartenders and sample the menu. I think in a lot of places today, that's the best way to do it. Instead of ordering an entrée, maybe order four or five small plates and appetizers to see what the restaurant has to offer.

Do you have any changes in store for the coming year? We will be opening some point this spring - maybe in six weeks or a couple of months - for a weekend brunch on Saturday and Sunday, so we're excited about that.