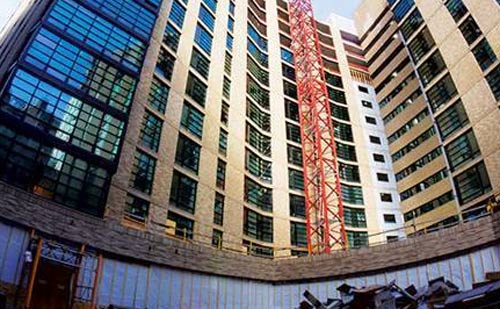 DOWNTOWN CROSSING - The first listings for the more-than-half-sold-out Millennium Place on Washington Street have begun to drop. The most expensive so far is $3,275,000 for a 3-BR, 3-BA penthouse spread over 2,349 square feet.
__
BOSTON - The city's mega-deals just keep on coming:
a 3-BR, 2.5-BA at the Mandarin Oriental has traded for $7,000,000; and the townhouse at 18 Marlborough Street, last listed for $7,900,000, has found a buyer.
__
EAST CAMBRIDGE - The re-developer of the former Sullivan Courthouse on Thorndike Street has agreed to add at least 24 apartments, after months of criticism of the original all-commercial plan from local residents.
__
HUB-WIDE - Our David Bates has written a letter from the future, which tells of the Boston real estate apocalypse caused by low inventory and ever-higher prices.

[Millennium Place under construction this winter/Curbed]