A Day in The Life of Clio Breakfast Cook Felipe Medina

Share All sharing options for: A Day in The Life of Clio Breakfast Cook Felipe Medina

Welcome to A Shift With. Here we will bypass the famous chefs, the oft-interviewed restaurateurs and GMs and try to shine a light on the individuals in the restaurant industry who perform their duties outside of the public eye. 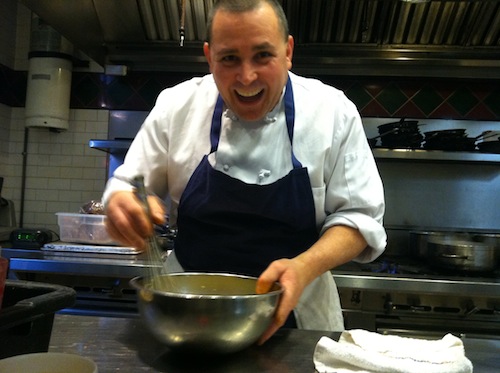 A Spanish radio show mumbles under the blur of bubbling pots and stovetop fans. At only six o'clock in the morning, the sun is rising and Felipe Medina is standing over his cutting board prepping sweet potato hash. The first screech of a ticket comes in as room service opens for business at 6:30AM. Swaddled in plush down comforters just above at the Eliot Hotel, people are starting to wake up. Felipe reaches for two eggs and cracks them over the skillet, cooking them till they're over medium. He's perfected that pivotal over easy-medium-hard distinction in the sixteen years he's fixed breakfast for Clio diners and Eliot Hotel guests alike. Though Clio's predominantly known for its dinner fare, Felipe ensures that the restaurant starts each day with a solid breakfast by working as the resident breakfast cook.

Hailing from Medellín, Colombia, Felipe preps for the dinner crew and rattles off the first meal of the day without breaking a sweat, and that's not because he's a hard-ass. In fact, Felipe is quite the softy. Picture the cook-incarnation of a steadfast parental figure, pouring orange juice and buttering your toast before getting you on your way. Yeah, that's Felipe. But this time killer omelettes, French toast and crispy buttermilk waffles make the menu—and you're encouraged to feast in your jammies.

The clock strikes seven and an order for Irish oatmeal rolls in. At five past, it's two eggs over hard. Then it's a Western omelette—hold the toast. He slides open his arsenal, a refrigerated drawer filled with diced meats and cheeses, and gets his fill of country ham. He moves for another drawer and grabs roasted red onion and bell peppers. With a swift shake, Felipe's omelette lands that crucial 180° flip. Meanwhile, hash-bound potatoes are boiling as micro-diced garlic and ginger sauté in butter. After cutting the sweetness of the potato with Tabasco, Felipe combines it with poached farm-fresh eggs and Espelette pepper-spiked hollandaise.

Felipe mans room service and breakfast until 10AM (12:30PM on weekends), and orders roll in and out at a pace that's almost rhythmic. The man cooks with the dexterity and ease of a rush hour hot liner, though he's undoubtedly the calm before the storm. In just a few hours, the dinner crew will roll in and a whole new vibe will take hold. But this is Felipe's kitchen now. When most chefs are just barely slipping into their slumbers, he's rolling into work. Especially in a restaurant that thrives after hours (Uni's late-night ramen deal, anyone?), Felipe is the ultimate morning person.

· All Coverage of Clio on Eater [~EBOS~]