The opening of Massachusetts' very first Shake Shack is just two days away, and more than 75 of you shared the lengths to which you'd go in order to be first in line on opening day. Response themes ranged from poetry to Harry Potter to baby sloths to time travel, but only five of you could win a coveted Massachusetts Shake Shack t-shirt. Winners, keep an eye out for an email from Eater requesting your shirt size and such. Drum roll, please...

New York-bound Neville W. invoked images of The Arnold: "From Lynn but I go to school at Syracuse and Shake Shack opens a week after spring break for us. =/ If I could I'd teleport back from Syracuse just to make it to the opening. Because I envision teleportation working like time travel in Terminator, I'd show up on Wednesday March, 20th @ 10:59am in a lightning storm, naked, at the front of the line. After I uncurl from a standing fetal position, in my best Austrian accent, just as the doors open, I'd say to those now waiting behind me 'Come with me if you want to eat.'"

Lovestruck Diana R. penned a "love letter to [her] burger":


They told me I had lost it
Why would I travel 218 miles
just to be the first in line to see you?
They said there were so many like you
right here, at home
But I knew better,
I knew that home was where the heart was,
my heart wanted you.
Darling, if loving you is wrong
I don't ever want to be right
Yea I know it's a cliche
but being on this Amtrak train
on my way to see you
is clogging my brain.
At least the train ride
from NY to Boston is pleasant.
I'm watching the trees
they're watching me back
telling me to enjoy the view.
I think they truly understand
how love makes us go out on limbs.
When I finally get to you
I know you'll be all dressed up
I'll tell you,
baby you deserve the works.
And you know me,
traditional as I am,
I'll give my thanks and say my blessings
our ritual, before we merge as one.
Love,
coming together
was the way it was always intended to be.

Piranha-fighting Andrew M. was driven by nostalgia: "When I saw that Shake Shack was coming to Boston, I could not -- no -- would not believe it. The fleeting memory of biting into my first Shack Stack surrounded by strings of lights in Madison Square Park and the crispy portobello mushroom crumbling inside my mouth seemed like just a dream. Maybe it was. So the question remains. What abusrd lengths would I go to be first in line on Shake Shack's opening day? I would swim up the Nile river carrying 45 lb plates on my back using a snorkel as my only air supply, fight off man-eating piranhas as I mount a Nile crocodile, ride it to Central Africa until I encountered a troop of gorillas, fight a 300 lb silverback gorilla for control over his troop, and bring them to Shake Shack a week before opening day to defend my place at the front of the line and feed them the delicious creation that is a Shake Shack Burger as payment."

Six-year-old Meri B. offered up handmade gimp lanyards via her mom, who attached a photo of the sacrificial items: "Meri loves to eat at the Shacks at Madison Park and Battery Park when we visit NYC. We periodically visit the Chestnut Hill site to see how the progress is coming along and to hopefully find out when she will be able to get some chocolate custard and French fries. Meri said she is willing to give her gimp lanyards for a Shack tee to add to her collection! She wants you to know how important they are: 'there's double box stitch and circle stitch' and that she has worked on them since camp last summer. Serious business here – that's a lot to sacrifice for the Shack! p.s. she just whispered 'they'll give them back right?'" 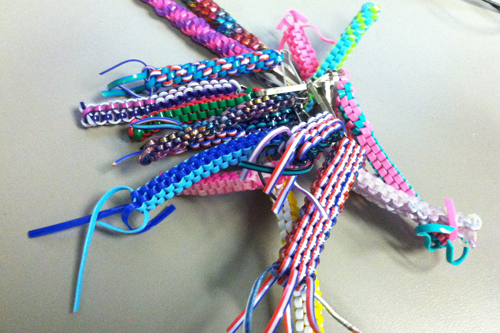 Impatient Branden M. used the power of the haiku:

Thank you, Chestnut Hill
For bringing us ShackBurgers
Might move to Rt. 9.

Congratulations to the winners! Wear your shirts with pride, and stay tuned for more updates about the Shake Shack opening.

· All coverage of Shake Shack on Eater [~EBOS~]