Share All sharing options for: Boston.com: 'Boston Phoenix to Close' 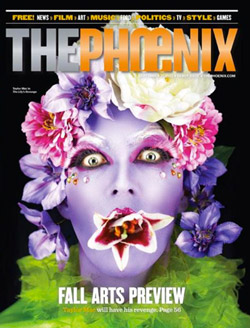 A tweet from Boston.com declares "BREAKING NEWS: Boston Phoenix to close." If that does indeed mean the whole of The Phoenix, the publication borne out of a merger between The Boston Phoenix and Stuff Magazine Boston, last year, it will spell a major blow to local food media coverage. The Phoenix is the home of the Food Coma column by restaurant critic MC Slim JB plus writing and photography from a host of other food and drink contributors, including Cassandra Landry, Ariel Shearer, Jolyon Helterman, Louisa Kasdon, Luke O'Neil and more. Stay tuned for developments and send any intel to the tipline.

Update: It appears as though the worst is true. The Phoenix itself now tweets "Thank you Boston. Good night and good luck." [Twitter]

Update: Boston.com now reports that The Phoenix "will be closing immediately, while its sister publications in Providence and Portland will remain open." The affiliated radio station WFNX.com is also now closing. According to a press release from the company cited by Boston.com, the online issue for the week of March 22 will be the last one of its kind. Executive editor Peter Kadzis had the following to say.

"It was the long-term decline of national advertising dollars that made the Boston Phoenix economically unviable. Providence and Portland, however, don't suffer from that problem. The local advertising market is sufficient to support those publications. You can see why Warren Buffett favors small market papers over their big city brothers and sisters."

Update: here's a statement from The Phoenix publisher Stephen M. Mindich as posted by The Phoenix blog The Phlog.

As of now the Boston Phoenix has ceased publishing and wfnx.com will not continue as it is.

As everyone knows, between the economic crisis beginning in 2007 and the simultaneous radical changes in the media business, particularly as it has affected print media advertising, these have been extremely difficult times for our Company and despite the valiant effort by many, many past and current staff to attempt to stabilize and, in fact, reverse our significant financial losses, we have been unable to do so and they are no longer sustainable.

Because of their smaller scale of operations and because we believe that they remain meaningful publications to their communities, with some necessary changes to each, it is our intent to keep the Providence and Portland Phoenixes operating and to do so for as long as they remain financially viable. The same is true for Mass Web Printing Co.

I cannot find the words to express how sad a moment this is for me, and I know, for you as well, so I won't try.

What I can and will say is I am extremely proud, as all of you should be, of the highest standards of journalism we have set and maintained throughout the decades in all of our areas of coverage and the important role we have played in driving political and socially progressive and responsible agendas; in covering the worlds of arts and entertainment, food and fashion - always with a critical view, while at the same time promoting their enormous importance in maintaining a healthy society; and in advocating for the recognition and acceptance of a wide range of lifestyles that are so valuable for a vibrant society.

And finally, at least for this moment, I want to thank all of you - and the literally thousands of women and men before you, for lending your talents to our mission over the past 47 years - as I have always said - our staff has been our soul.

And obviously as well, my sincere gratitude to our millions of readers and tens of thousands of advertisers without whom none of what we did accomplish could have been possible or meaningful.

So, that's it. We have had an extraordinary run.