Sullivan's Laughs at Snow and Opens for the Season

Share All sharing options for: Sullivan's Laughs at Snow and Opens for the Season

Forget the groundhog; it's the annual opening of Sullivan's that truly heralds the coming of spring, at least in South Boston. The Castle Island food stand has been serving up cheap hot dogs, lobster rolls, and other beach food for the warmer part of more than 60 years, generally opening in late February and closing after Thanksgiving. On hot summer nights, Sullivan's tends to stay open until 10 PM, but call first during the rest of the season or if the weather's bad. They'll close early "if there are more seagulls than cars in the parking lot."

This year, the popular spot opened this past Saturday, February 23, at 8:30 in the morning. (Breakfast's available until 10:30 AM: egg & cheese bagels, French toast sticks, tater tots, etc.) Around lunch time on opening day, about 40 people were lined up inside, waiting to order or pick up food, but by later in the afternoon, the line was extending out into the parking lot. With piles of snow still dotting the landscape and customers huddled around the outdoor picnic tables in heavy winter coats, it didn't feel quite like summer yet, but the seagulls were just as ready to brave the cold as the hungry diners. 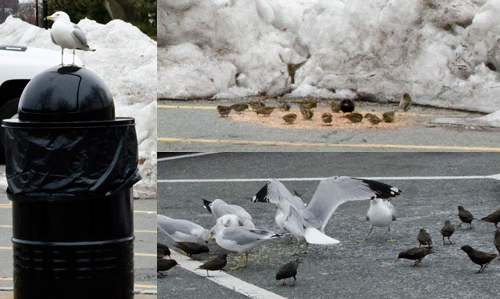 The vast majority of the opening day clientele was clearly made up of regulars - and in some cases, regulars introducing Sullivan's to a new generation. Young children could be heard asking parents and grandparents about what it was like years earlier. "Your aunt cut herself running down that hill," one parent warned a child of the steep incline off to the right of the food stand. Meanwhile, an out-of-towner was immediately identified as a newcomer by pronouncing the "-er" in "chowder," and the cashier paused and politely explained where the customer should go to pick up his meal. Everyone else knew the drill, and the line moved very quickly.

Through March 1st, the hot dogs are half-priced (just 80 cents, plus tax), and Sullivan's introduced a new menu item this year, a grilled chicken Caesar salad (also available as a wrap).

· All coverage of Sullivan's on Eater [~EBOS~]