Michael Pagliarini of Giulia on His Current Favorites

Share All sharing options for: Michael Pagliarini of Giulia on His Current Favorites

Welcome to Chef Faves, an Eater Boston series where local chefs share some of their current favorite dishes, ingredients, and more. Here's Michael Pagliarini, chef and co-owner of Giulia. 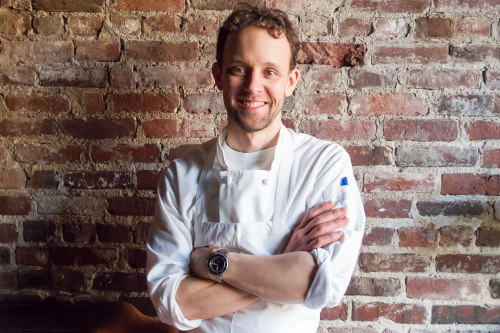 What's your current favorite dish in Boston?
Pam (my wife who is also the co-owner here) and I had dinner recently at Cafe Sushi, and it was awesome. It's right on Mass Ave., and it's been there for a really long time, but there's a new chef there. We had omakase (a chef's tasting menu), and it was fantastic, so fresh and clean and smartly composed. It was just so thoughtful and respectful of tradition but pushing forward a little bit. He has a market board with the fish of the day, whatever has caught his eye, and we've had Japanese mackerel that was incredible. He'll do local bay scallops. I would say that whatever he wants to put together, just trust him; let him do his thing. We just really had a great time. I mean, he had fried fermented Japanese fish heads that his Mom brought back. We were just so into it, and we became fast friends. It's a little under the radar still, but he's going to be a star there. He's just doing really great food.

What's your current favorite ingredient to use?
I'm crazy about flour. I've just spend so much time with it and work with it here all the time in the pastas that we make. I mean, with pasta, there's really only a few ingredients—egg, water, flour, and maybe a little olive oil and a pinch of salt. The flour has got to be fresh. There's an organic emmer flour that we're using now from Bluebird Grain Farms out of Washington state. That part of the United States still grows the best hard wheat. Emmer is an ancient food, and they didn't even realize the value of it until chefs started asking for it and using it. Bluebird Grain Farms mills it to order, and until you've had flour that is milled to order, you can't understand what fresh flour is like. Every bag of flour that I open, the very first thing I do is smell it and taste it. I can't tell you how much flour I've sent back to the purveyors, telling them that it hasn't been stored properly and it's a little off. As soon as you add water to flour, that's when it really releases its aroma, and it's important to pay attention at that point. It should smell pleasant, the same way that when you cook the pasta, the water should have a pleasant aroma to it and it should taste good. In addition to flour, I love quince. Seasonally, I just think that they are such a special fruit. It's just such a good, fall flavor.

Where's your favorite place to go for food inspiration?
When we were leading up to opening here, I spent a lot of time cooking. I still enjoy cooking at home. We are closed on Sundays so I get the opportunity to cook at home, and there, I'm just free from distractions. If I get a product sample, I often take it home, and I'll cook it for Pam, and we can just sit down with it and really pay attention to it and enjoy it. There's just something to be said for cooking at home. I do tend to have a well-stocked home kitchen, and then I will come to the restaurant on Sundays, and I'll get some ingredients. I've also sort of become nocturnal; the other night I was up until 3am thumbing through Michael White's book. I also love the classics, like Marcella Hazan.

What is one of your favorite food memories?
Oh my goodness, so many! Before we opened, Pam and I took an extended trip to Umbria. I have a family connection there; they are lentil farmers and they still are there. We have Umbrian lentils on the menu all of the time, and they are served very simply, either with our house-made pork sausage or on their own. We visited all of these small towns around Umbria, and each was so special in its own way. We visited a place where we had lunch at a wine bar, and we went to this vineyard—because it was not a good day to be working in the vineyard, their whole family was there. The food was incredible, and it was hospitable. We had really special wines, and then they sent us off to this great trattoria for dinner.

Also, there is this medieval town, and there's this butcher that you just have to go to when you're there. He's famous for butchering the chianina, which is the type of cattle that you see in Tuscany and Umbria. It's such a big, white, majestic cattle. When you get a traditional bistecca alla fiorentina, that's what it is, and in my broken Italian, I remember telling this butcher that I wanted a big, double-cut, thick chianina and got it and took it back to our little farm house rental that had a little fireplace. And I took this chianina, and I cooked it over vine clippings from the vineyard that we were staying on. I then just made a simple pasta with truffles, because we were in Umbria and they're everywhere. We had the rib chop, and it was just so spectacular. I could go on and on about food memories...childhood and growing up. My mother is not only an excellent cook but an entertainer as well, and when I think back to my early inspiration, before I even knew it was inspiration, it was my Mom just hosting parties. We were the house that everyone would go to for the holiday parties. My Mom would cook whatever was fun, easy, and effortless—well at least she makes things look that way—she's just a very good host and great cook.

What are your favorite dishes currently on the menu, and what are you most looking forward to doing in the near future?
We have a dish right now, it's our house-made spaghetti with cardoons, clams, and oyster crema. The cardoon is this mysterious vegetable that not a lot of people cook with. It's in the artichoke family, and it has wonderful and complex flavors that have a particular affinity for shellfish. We had been doing a traditional spaghetti in the summer and then had it bianco-style in the fall. Then with the collaboration of Brian Gianpoalo, our sous chef here, we made this dish, and I love it. As we get into colder months, it's just fantastic. We're using Island Creek Oysters, and we make a beautiful creamy sauce with that. It's got the toasted breadcrumbs and the clams and some white wine and the cardoons. It's one I really like right now.

What is your favorite thing to cook at home in your (limited) spare time?
[Laughs.] I'm laughing now because I actually do like to cook pasta when I'm at home. I like to make a traditional Sunday ragu. You know, a big pot of meat sauce, and I'll make enough for the next five Sundays, because if you're going to do it, might as well have a big pot. And I really like making it and just having it simmering all day. I'll tinker with it and stir it, and it just makes the house smell so good. I'll pick a simple vegetable and then just do some toasted garlic bread with some great, fresh olive oil. We'll have to the whole thing with some homemade tagliatelle, or some other sort of pasta. We always seem to be going back to that.