Nuno Alves On His Current Favorites

Share All sharing options for: Nuno Alves On His Current Favorites 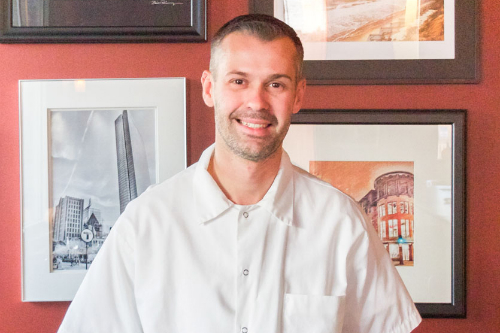 What is your current favorite dish in Boston?
My wife and I went to Sarma the other night, and it was really awesome. We live in Somerville, so now we've got this great hangout spot. The brussels sprouts with chorizo were really good and the octopus was unbelievable. When I'm at the fish market I like to go to Pennypacker's for the porchetta sandwich. Other than that, we go to Toraya in Arlington, a real small place, like 20 seats. It's just really authentic, Japanese flavors. On Sundays, if we get the chance, we go to T.W. Food, which is always awesome, or we go to The Gallows. My wife and I aren't into that loud bar scene, so we usually pick the ones that we can just go to. We're hoping to get out to Commonwealth soon; we love Nookie.

What is your current favorite ingredient to use?
I use a lot of Piri Piri sauce. I make a lot of it in-house and use it on pretty much everything, except dessert...yet. It's just a really great comfort thing. I get all of the peppers at the local farms. Pepper season is actually just over, so I just bought out as many peppers as I could and made a bunch of Piri Piri, so that should last me a while. I use it in a lot of dishes, like the braised lamb. It gives it a distinctive flavor without being too overpowering. Coming up, I'm going to be doing a braised lamb served over beer pasta. Beer is a great ingredient to pasta because it just makes it fluffier; the wheat and carbonation from the beer change the texture of the pasta and make it much lighter. It's pretty cool. In addition to that, I love all the local squashes. I ate a lot of squash growing up and it's one of my favorites. We've got a nice pumpkin-squash soup on the menu right now.

Where are your favorite places to go for inspiration?
We go to Hawaii a lot, often in January. That's pretty much the only vacation, and I get a lot of my inspiration from there. My mother-in-law used to teach culinary school, and she has tons of cookbooks everywhere. That's sort of my usual morning routine. I read cookbooks and then I make them dinner, usually pastas and pizzas and things that they can't usually find on the island. I also get a lot of inspiration from just being there, fishing, eating out, visiting farmer's markets, etc. We also know a lot of farmers there, and we do farm tours, and I draw a lot of inspiration. Because of the timing of our trip and everything that's in season in Hawaii, I'm able to sort of plan ahead and start thinking about spring menus when I'm there.

Locally, I get as much inspiration from the farm as I can, and I try to use as much local produce as possible. I also just got a bunch of stuff from The Food Project; they are growing some greens in Dudley, and the greens are just so delicate. I get so much inspiration from fresh produce.

What is one of your favorite food memories?
See, I was a spoiled brat growing up, and I just figured that out. I grew up eating things like octopus, quail, and rabbit and making our own sausages at home. Those are my fondest memories, cooking sausages with my mom at home and making French fries with her, shallow frying potatoes to order, which was a treat. I loved her braised octopus, and that's still the recipe I use today. I remember waking up in the morning to Mom and Dad just going at it, making tons of fried dough. I used to get so sick of it, but now I miss it so much.

For me, it was that memory of being excited about food and since I'm the baby of the family (actually one of 11 kids), cooking was a big part of my childhood. I was the little guy holding the bowl for my mom. She never worked [laughs] — okay, with 11 kids, she worked, but she always made everything from scratch, and my dad was a great cook as well and it was just something we did. For me, I never set out to cook; it was just something you needed to do to survive.

What are your current favorite dishes on your menu?
That's a tough one. The pork chop is awesome. I mean, I'm a big pork guy. I also think the sausages on the menu are kickass. I make them every other day. The octopus and carbonara are also really good, and they sell really well. Our menu changes daily, but some things like the carbonara are always on the menu. The pizza is really nice; we got a great pig, and the ham on one of the pizzas is from that pig, and it's one of my favorites on the menu. We also dry-age our steaks in house so those are really nice too.

What is your favorite thing to cook at home in your (limited) spare time?
I love to cook for my wife, and she loves everything. She loves biscuits, and we have beef stew and biscuits a lot. I love making home-cooked meals like pot roast and roasted potatoes. Her favorite thing is lamb chops, so we have a lot of lamb, and I'll marinate it and grill it. I'm the guy that fires up his grill in the winter just to cook some lamb. We like to eat a lot of comfort food at home, like whole roasted chicken. We also like things like oysters and crab legs, and we'll have that on Sundays from time to time. We're both in the frills and mess all the time with work, so the food we make at home is just simple, comfort food.
· All coverage of Nuno Alves on Eater [~EBOS~]
· All coverage of Tavolo on Eater [~EBOS~]