Drink Gary the Goon at The Sinclair

Share All sharing options for: Drink Gary the Goon at The Sinclair 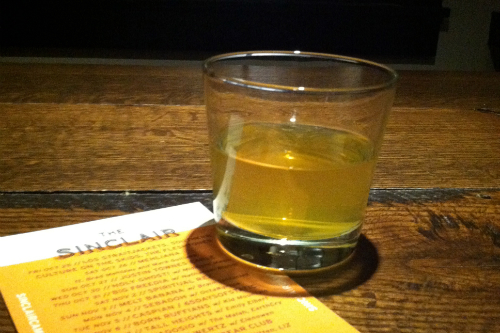 At The Sinclair, bar manager Dave Werthman is serving Gary the Goon at the bar all week for $10. It's an homage of sorts to Gary, the "uber-creepy bar manager" at Werthman's first gig behind the bar as an 18 year old in Kansas City.

Gary the Goon is made of 1.5 Le Compte Calvados, 1/2 ounce Clement Creole Shrubb ("an orange rum-based liqueur from Martinique, often compared to Grand Marnier, but so much better, less sweet, and lighter," says Werthman), 1/3 ounce Bitterman's Amere Nouvelle, 3 dashes Reagan's Orange bitters, and Herbsaint rinse. Guests can wash it down with a "Sinclair," a $1 beer back chaser (much more Gary's style). Don't know if I would call him a mentor," said Werthman, "but he did give me a chance, so here ya go, Gary."
· All coverage of The Sinclair on Eater [~EBOS~]
· All coverage of Cocktail Week 2013 on Eater [~EBOS~]