Share All sharing options for: Drink the Linden Park at Eastern Standard 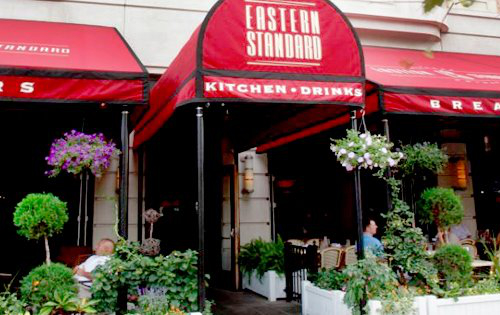 "I've been blessed with the incredible circumstance of having two mentors over the course of my bartending career, and in life, really," said McCoy. "When I joined the staff at Eastern Standard in the summer of 2007, I was awakened into a new world of bar service and hospitality through the eyes of Jackson Cannon. But it was my first mentor, my father Bob McCoy Sr., who primed me for this amazing opportunity. A legend in his own time, he brought me behind the bar when I was 18 and passed on the wealth of knowledge that became the foundation from which I built upon.

In my early days at ES, I grew especially fond of classic cocktails and the new originals created by our peers that were directly inspired by them. Case in point was the Manhattan and the recent creations out of NYC like the Red Hook, Green Point, and Little Italy, as well as those closer to home like our own Tom Schlesinger-Guidelli's Prospect Park. I wanted to create a cocktail that would echo this lineage, as well as pay homage to my own. What resulted was the Linden Park, a Manhattan variant named after the area of Malden my father grew up in.
· All coverage of Eastern Standard on Eater [~EBOS~]
· All coverage of Cocktail Week 2013 on Eater [~EBOS~]

Eater Boston Is Looking for a New Editor. Is It You?