Drink the Yukon Cornelius at Lineage

Share All sharing options for: Drink the Yukon Cornelius at Lineage 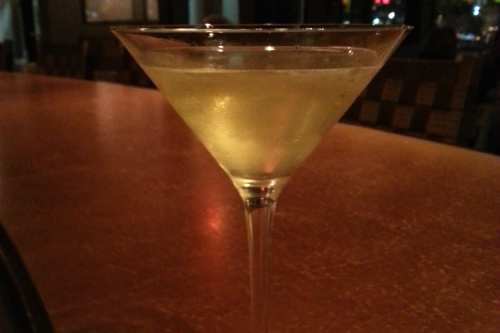 At Lineage, bartender Rob Dunn is offering a drink called the Yukon Cornelius (aka the Silver and Gold cocktail) for $11 as a verbal special all week. And keep an eye out — it'll make its way onto the winter cocktail list come November. The recipe is equal parts El Jimador Silver Tequila, King's Ginger, Royal Combier, J. D. Taylor's Velvet Falernum, and a dash of cardamom bitters, all stirred and strained into a cocktail glass with no garnish.

"Here is my new cocktail in respect to the last person who trained me — Brendan Pratt from Lineage, who was the bar manager prior to myself and trained me into my current position," said Dunn. "He also goes by Moses among the Lineage staff. The story behind this cocktail is that I had ordered too much El Jimador silver tequila and realized my mistake at the same time as I had obtained a new liquor for our bar called King's Ginger. In my head an image of silver and gold came together and I immediately imagined a regal concoction. The first name was just Silver and Gold.

Going into the winter season, I thought it'd be perfect for a Christmastime cocktail. I ran it by Moses (Brendan), and it led us to chuckling about the old Rudolph the Red-Nosed Reindeer claymation cartoon from when we were kids. Out of the conversation came the character of Yukon Cornelius, who was always in search of silver and gold in that cartoon. So the cocktail is now tentatively called Yukon Cornelius a.k.a. the Silver and Gold cocktail."
· All coverage of Lineage on Eater [~EBOS~]
· All coverage of Cocktail Week 2013 on Eater [~EBOS~]