Share All sharing options for: Comedian John Hodgman on Serving Milkshakes to Strippers 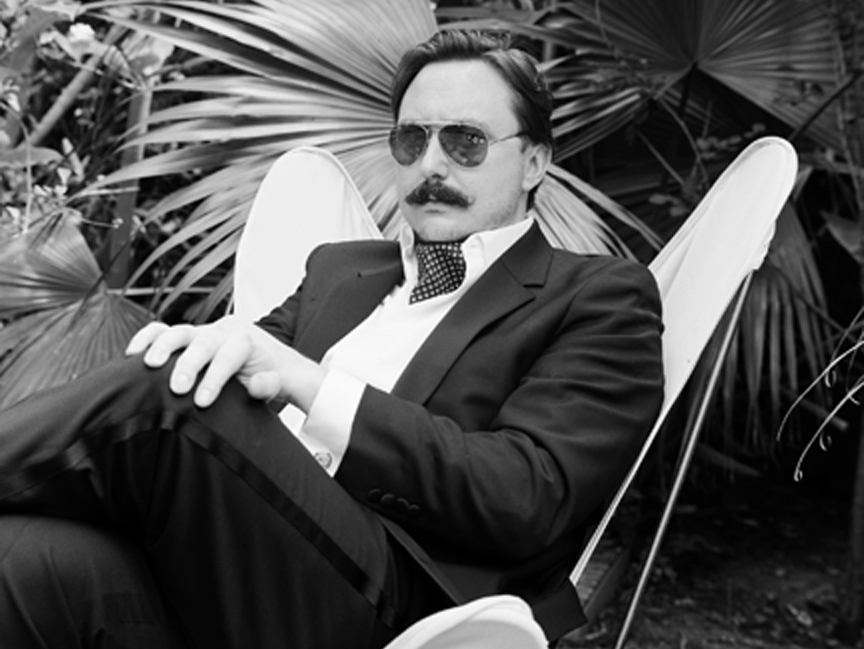 [Photo: John Hodgman/Official Source]
Best recognized from his appearances on The Daily Show and as the PC in the now-classic "I'm a Mac" Apple commercials, Brookline native John Hodgman's circuitous comic career began as a sometimes food writer, ultimately finding his voice as a multi-volume author and expert on facts that he himself made up. Hodgman has left the fake facts behind and has embarked on a standup career. Ahead of this weekend's performance in Boston, he spoke with Eater about his interesting path to standup, working in an upscale gay restaurant in Boston's Combat Zone, and the struggles of dining on the road.

I know you from your television appearances, and of course your books. How did you come to do standup, and what should someone expect from it?
I started doing comedy "backwards," in that most people who perform comedy professionally start as standup (or sketch) performers. Then maybe they get to go on television, and then they write a book featuring themselves on the cover, wily touching their own chins, featuring the wit and wisdom of themselves at their finest. Whereas I started out as a magazine writer — for the New York Times Magazine and Men's Journal — writing about creative people and food. I was also writing humor for McSweeny's. I developed a deranged voice in that column — a John Hodgman of authority — even though I — as the John Hodgman who wrote those columns — didn't really know what I was talking about. I carried that over to writing books of fake facts and invented knowledge.

The backwards component was that I wrote books first then accidentally went on television, initially to promote my first book, and then continuing as a contributor to The Daily Show. Then there was some expectation that I would also be able to perform comedy. I was lucky enough to have gone on enough book tours and making them performative and not simply boring. I had been to enough boring book readings to know that you can't do that, And I developed an onstage comic persona that varies between the truly in-character lunatic of the resident expert / deranged millionaire of my books, and the actual human being that I am. I would read portions of the book and I would link them with personal stories and interactions with other performers, most commonly my friend Jonathan Coulton. Then I would open the floor to questions, saying, "I am a regular human being; please do not feel like you have to ask funny questions to get funny answers." Because that emotional vulnerability troubled me so much, I would make sure I only answered questions by walkie-talkie.

By the end of 2012, I had actually logged quite a bit of time on stage, and was no longer touching my written material. I would go out and simply tell jokes in an imitation of standup comedy that, I think, fooled those people. That culminated in my Netflix standup special Ragnarok, which was the document of the show that I developed around my apocalyptic final book of complete world knowledge. It was filmed on December 21st of 2012, which I had announced in my book and stage show as being the end of the world. But, the world didn't end, and so I went into this year enjoying doing standup comedy, but having to essentially start from scratch. So I started booking a more or less weekly show, — Union Hall in Park Slope — to fill out an hour with whatever I could think to say, and the result has been a very new realm of material.

What you see in Ragnarok is certainly me, but it's a heightened version of me — heightened by not wearing shoes and socks, wearing a tuxedo, an ascot, and aviator glasses and pretending to be a deranged millionaire. I now no longer pretend to be any more deranged than I actually am. The material is as conceptual as I've always done. I have a long section where I dress up as Ayn Rand and read the imaginary columns that she never wrote for Parade magazine in 1980 about her hatred of freeloaders and her love of Fresca and Charlie's Angels. In many other ways, it's much more straight forward and personal storytelling than I've ever done before. It's all the vulnerability of the closing moments of those early book tours, but without the walkie-talkies.

That's the big, broad answer to your question, but — to be hyper-specific — people see me come out on stage. I will be wearing more clothes than I need to be wearing. I will take off some of those clothes. I will tell some stories about surf shops in Florida and traveling through the world. I will discuss the danger of writing that is based on cultural references and name-dropping of esoteric TV shows. I will probably bring up some young person — ideally someone who is of the teenage variety — to bother on stage. I will likely discuss my own children, but to protect their privacy, I will pretend I am talking about my cats. I will tell a story that involves me becoming intoxicated, not on stage — although that's possible. And then I will probably sing a song or two, and I may well dress up as Ayn Rand.

You grew up in Brookline and at one point got a job in a restaurant?
I worked at a restaurant in Boston called The Downtown Cafe in what was then known as the Combat Zone. What is it called now? Something gentrified?

They've tried calling it the Ladder District.
I've never heard such a thing. The Downtown Cafe was on LaGrange street. A friend of mine who used to be a waitress there got me a job as a dishwasher. It was a three-person operation: Dan was the chef-proprietor who did all the cooking, the waitstaff was one man named Luigi who worked during the day at the pawn shop next to Jacob Wirth's, and I was in the back, washing dishes. And it was an exceedingly eccentric, interesting, and fun place to work. Dan is a gay man, and the restaurant was well known in the gay community for fine-dining in a particularly shady street, off of what once had been the red light district. Our clientele was usually well-heeled gay couples and a few mixed parties. After a certain hour, strippers would come in for milkshakes. At about midnight, Dan would wrestle down a gigantic four-gallon tub of the kind of that kind of vanilla ice-cream that is bright yellow and make milkshakes for all the off-work strippers and exotic dancers that used to perform at the [long-closed] Naked Eye.

I learned how to properly dress a salad with just olive oil and a little lemon juice. I also remember he had a deal with some local comedy club so the people could call in orders for chicken fingers, and I would walk them through the Combat Zone, across a derelict parking lot, and into the comedy club, and deliver these grody chicken fingers. They weren't grody, but I'm not sure the "dudes" who were ordering these chicken fingers were expecting the fine-dining interpretation of chicken fingers from a seven-seat gay restaurant down the road. I think they probably expected frozen chicken fingers, but it was interesting to go in and see standup as it was performed in 1990 or 1991 and think to myself, "I will never ever do that; that looks awful."

How often do you come back to Boston? Any favorite places from when you were growing up that you like to return to?
I spend most of my time these days in Western Massachusetts, because my mom had a small home there before she died, and my family and I have taken it over. It's a booming food scene because that's the fertile crescent of Massachusetts, with incredibly rich farmland. In the summertime, all you want to do is eat corn and tomatoes, because they are superb. But there are incredible restaurants opening all over. In Greenfield, there is a terrific pizza restaurant called Magpie. Northampton has amazing restaurants.

The reality is that I don't spend a lot of time in Boston, but I'll tell you what I remember. I grew up going to the Busy Bee Diner on Beacon Street; that's a great place. They would always serve sodas and other beverages in these paper cones that would be propped up in this little container for you. I thought, "You know, glasses are available in the world, as are paper cups." It seemed like the worst of all worlds.

I am trying to think of where I've been eating in Coolidge Corner. That's where I grew up. Most of my time as a semi-adult was spent working at the Coolidge Corner Theater. The pizzeria Otto — I think they are amazing. Also, I really enjoy Osaka right down the road from there, for theatrical hibachi. Fugakyu, I like going there because it's open real late and the problem about doing shows on the road is that in most American cities, everything stops at about 11, if you are lucky. If you are in the Midwest, it's 10.

Here's what I look for after I finish a show: I need to go to a place that I can sit down, that will ideally serve me a steak and a martini. I cannot go to a place where they only serve beer and wine. That's not just late at night, that's any time of the day. That's not for me.

[I mention Bogie's Place and hear Hodgman Googling and reading the results]
"Thanks to Eater Boston for including us on the list of where to drink."

The Blue Room is still going. They've totally revamped. They dug out in the back corner a funky little wine bar called Belly, and the chef they have there used to work with Barbara Lynch.
Well that's a place that I used to really treat myself and my then-girlfriend and now wife to when I was there. One of these days we'll go check it out.

This is incredibly useful piece that you wrote. Now I want to spend more time in Boston. It's hard to go back to a place you haven't lived in for a very long time. It's a little frozen in amber in your memory. You only know to go to the places you remember as being good, and the reality for me is that my memory stops in about 1995. I used to love to eat in Boston, but now the places are either gone, or if they are still around it's because they are either very good or they just can't get rid of them. My dining out tastes are exceedingly old when it comes to Boston. I can say that the place I miss most in Kenmore Square was Deli Haus. Did you ever go there?

I did. I miss it terribly.
That was the first place that I ever had kishke — stuffed derma. It was wonderful.
John Hodgman performs on Saturday, November 2nd at the Wilbur Theatre in the Theater District. The show is at 9:45 and tickets are $33.
Eater Boston intern Gabe Bellegard-Bastos transcribed this interview.
· All coverage of Comedian Confidential on Eater [~EBOS~]