Share All sharing options for: Comedian Doug Stanhope on Whale Sushi and More

Welcome back to Comedian Confidential, in which local comics (or those with local roots) discuss their favorite restaurants and more. 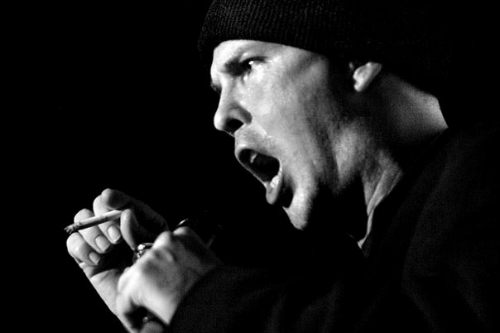 Doug Stanhope's Twitter bio covers all the bases: "Drunk. Comedian. Obsolete." The Worcester native lives in Arizona nowadays, but his tour schedule brings him home this Saturday, October 19th, when he'll perform at the Wilbur Theatre and be forced to go out to dinner with people, which is "one of the grossest things in the world." Stanhope, more of a self-professed chain smoker and drinker than a food guy, nonetheless chatted with Eater about hot dog memories from childhood, a very weird comfort food combo, the importance of condiments, and more.

You left Worcester when you were fairly young, but do you have any food-related memories from back then, anything from Massachusetts?
Oh yeah. I'm really not a food guy at all — I'm a chain smoker, drinker guy — but going back to New England, there's fried clams, steamed clams. We went back to Hampton Beach, and I just gorged on all of that stuff. I'm trying to think of the places we used to go...what was the name of the place? Hot Dog Annie's. Have you ever heard of Hot Dog Annie's [in Leicester]? That's not a clam place, that's a hot dog place, but they have this really unique barbecue sauce with caramelized onions, and it's a bun that you can only get there, a flat, grilled bun. We'd just take these tours through Worcester and Hampton Beach and eat fried clams. And steamers. I'm not a huge lobster guy, but I'll eat a lobster roll. Does McDonald's still have lobster rolls?

Once in awhile, I think. Maybe just during the summer? I don't know if I'd trust a lobster roll from McDonald's...
They were great, from what I remember. They were my dad's favorite lobster roll.

Do you eat lobster rolls with mayo or butter?
Butter. I don't think I've ever put mayo on a lobster roll.

Me neither. I don't put mayo on anything.
Well, even fried clams are really just a delivery service for?[sings] tartar sauce! Every food I eat is basically for the condiment that goes well with it. Most food is just a blank canvas for good condiments.

So what's your favorite condiment?
It's a long-running battle, but I think A.1. Sauce. It's the most versatile. When I go to the UK, not only is the food shit, but they have no good condiments, and it makes me crazy. Now, you wouldn't eat a baked potato plain. Baked potatoes are so good because so many things go good on them. If you're a restaurant and someone asks for hot sauce, and you only have Tabasco, that means you don't have hot sauce. That is shit, garbage, and it infuriates me every time I go to breakfast and all they have is Tabasco. I'd carry a briefcase in the UK just full of condiments: salsa, A.1. Sauce, different kinds of hot sauce — Cholula.

That might be hard to get through security nowadays. You'd have to pack it all in little three-ounce bottles or something.
You put it in your checked bag, and then you carry it handcuffed to your wrist for the entire UK tour, 'cause they're not going to have what you want.

So you're living in the Southwest now when you're not touring — you must have pretty great hot sauce down there?
Yeah, it's plentiful. But then you get up here — we're in Wisconsin now — where if they have Tabasco, well, they might have "taco sauce," which is a spicy ketchup. But yeah, the Southwest is great.

On a trip awhile back, I ate some amazing things out there that I've never been able to find back here in Boston. Sopapillas?
Yeah, and you rarely find shredded beef in tacos in Mexican restaurants in the Northeast.

How do you find food on tour? Are you just grabbing whatever's convenient, or are you seeking out regional specialties?
It depends. I don't go out of my way to find anything but sushi. I try to eat sushi to be healthy, but I always tend to end up in some dump drive-through, eating in a hurry.

Where's the best sushi you've ever had?
Oddly, the airport bar — which is the only bar I'm a regular at. I'm in and out of there twice a week, 30 weeks a year. It has a sushi bar attached to the bar, a little four-seater, and it's some of the best sushi I've had. And in Norway, there was a place that was, like, a 25-minute walk. I have no idea what the name was, but it was in Oslo. We'd walk every day, and I'm a lazy person. It was so good. They had whale, which I think is illegal everywhere but there and Japan. We walked that 25-minute walk both ways every night just to eat whale and other things. Crocodile. Kangaroo.

Oh, I had kangaroo a few nights ago. It was interesting?
Yeah — chewy, awful. But I had to try it because it was available.

What about the whale, what did that taste like?
Just fantastic. Really tender, great. But again — sushi's always for the soy sauce and the wasabi.

And the ginger?
Don't like the ginger. And I always have them replace avocado with cucumber. Avocado's just...something's really disgusting about it.

Outside of sushi, what's the best meal you've ever had anywhere in the world?
My favorite meal is always Thanksgiving dinner. Turkey and a dark brown gravy — I don't like turkey gravy — mashed potatoes, summer squash, cranberry sauce. The shitty canned kind. Not the one with cranberries in it, although I'll settle for that. I like that shitty Jell-O mold Ocean Spray cranberry sauce. That would be my last meal.

Do you cook a lot, or do you go to restaurants more often?
When I'm home, I always cook. I don't think I'd serve it to other people. But I cook really good for what I like, which is usually horribly over-salted, whatever it is. Over-seasoned. I have no training. My brother's a chef, and he's aghast when he sees me cook. I cook for football. American chop suey — I forgot the name of it; I was just calling it goulash, which is not right at all. But American chop suey — tomatoes, macaroni, tomato sauce, green peppers. And there's always shredded something. Shredded chicken, shredded pork tacos. Anything you can put in a crock pot and let it sit for nine hours. Like I said, I'm not a good cook, but I do cook all the time. There's stuff I want to learn how to make. There's a place in Tucson at the Hotel Congress with an appetizer called the Thompson Automatic, which is shredded chicken with Frank's Red Hot and gorgonzola, cooked into an egg roll, and you feel gout coming with every bite.

Do you have a guilty pleasure food that you turn to after a bad show or a bad day?
I remember playing in Cincinnati in a club, and they put you up in the middle of fucking nowhere, and the only thing to eat was McDonald's next door or the Skyline Chili. I remember pulling in and being disgusted because they had a double Filet-O-Fish on the marquee, and I'm going, "Who the fuck would eat two of those? Who needs that?" Cut to Sunday afternoon, and I almost feel like I'm about to cry as I'm biting into a double Filet-O-Fish. But guilty pleasures...I don't want to keep saying McDonald's. I don't want to say McDonald's at all. Well, there's a comfort food that I'm known for. Jell-O with French dressing and bacon bits. My mother used to make Jell-O molds, and then she'd have this salad, so you'd end up getting dressing on your Jell-O, and then I just learned to accept it. And then I learned to love it. That would be a guilty pleasure.

Does the Jell-o flavor matter?
No, it doesn't really matter. Red or orange. They all taste like Jell-o.

I think the green one tastes a little different than the rest.
Well, not when you have the French dressing. That very bloody orange French, not that Catalina shit.

Are there any foods you've fallen in love with on the East Coast that you can't get out West, or vice versa?
The pizza we get in Massachusetts — not even the East Coast, just Massachusetts specifically — you can't find anything like that. Most of the places I went to as a kid were Greek, so I don't know if that's the difference. Hamburg pizza with grilled hamburg, almost crunchy. Holiday Pizza was our local pizza place, and I still to this day try to find a pizza as good as that. I remember the first time I went back to Worcester, and that place was all shut up, and I wanted to throw a tantrum.

What can you say about your upcoming show?
I have no idea what to tell you, what to expect. I've been working on a ton of new shit; I don't know if any of it's funny. But we'll find out. It's always very stressful because I have some family there, old friends, a million people that I have to talk to, which I hate. That's a time that I'll have to go out and have dinner with people. One of my least favorite things to do. I like to eat alone. I don't know why people get together to eat. It's one of the grossest things in the world, to watch someone eat. I don't want people watching me eat. I eat quick — that's why I like the sushi places that have the train that goes around, or some silly thing where it's all out there, and you just grab it and throw it down your head and move on.

Stanhope performs this Saturday night, October 19th, at the Wilbur Theatre. Tickets are available here.
· All coverage of Comedian Confidential on Eater [~EBOS~]