What, Where and How The Kennedys Ate, Plus Some Lies

Share All sharing options for: What, Where and How The Kennedys Ate, Plus Some Lies

Whale Week just wouldn't be complete without a historic whale, and who better to represent Boston than JFK? For more on JFK's expensive taste, see today's special posts on Curbed Boston and Racked Boston. 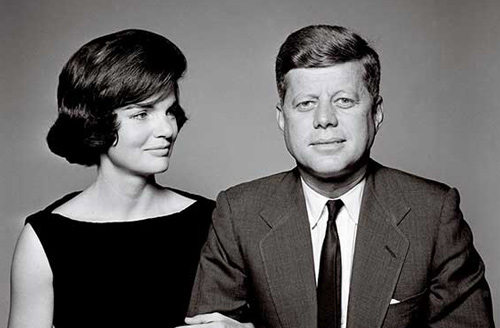 Boston has spawned many a wealthy politician over the years, but none has so many rooms in bars and restaurants named after them as John F. Kennedy. There was The John F. Kennedy room at the now closed Locke-Ober, where the president allegedly ate with friends, The Kennedy Booth at the Union Oyster House, in which JFK is said to have eaten lobster stew, and the booth at the Omni Parker House Hotel, where some say JFK proposed to Jacqueline Bouvier. Yes, there are all sorts of old-timey Boston institutions where Kennedy may or may not have eaten scrod. The point is he's from Boston, he was rich and famous, and is therefore one of the city's most prominent historical whales. Whale Week now continues with a bunch of juicy tidbits about the president and first lady's life in food. For fun, there are some utter lies mixed in: see if you can spot them!

· After Lieutenant Kennedy's PT 109 was torpedoed by the Japanse during World War II, Kennedy led the surviving crew to an island where they sought shelter and ate coconuts. The following morning, Kennedy and one of his crew mates swam to another island, where they found a box of Japanese provisions containing crackers and candy. 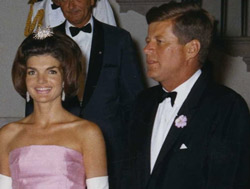 · It's a little known fact that JFK invented both Boston Baked Beans and Boston Cream Pie, but it was Jackie O who thought to separate them into two different dishes!

· In the White House, JFK liked little quiches for his lunch and Jacki O "favored the daiquiri." They both liked soufflé.

· JFK proposed to Jackie O by hiding a ring inside a mealy piece of potato at the bottom of a bowl of clam chowder.

· For breakfast, Jackie O typically had scrambled eggs, two strips of bacon, one glass of skimmed milk and one of orange juice, though John Jr. often ate all the bacon. Later, bacon would become very, very trendy.

· Once, a young JFK ate all the frosting from his brother Joe's piece of cake. Joe hit John, then John hit Joe. 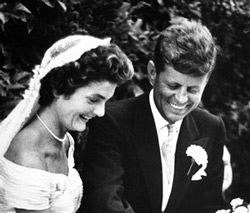 · Samuel Adams Boston Lager was originally called Jackie O Suds, because everyone knows that she loved beer and had a huge beer gut, which she hid by carefully holding a pillbox hat over her abdomen. Sometimes, she also wore it on her head.

· The 35th president apparently did not call himself a jelly donut in German when he said "Ich bin ein Berliner," as was previously thought.

· In 1963, Kennedy attended the customary Thanksgiving White House turkey pardoning, but did not issue an official pardon for the bird.

· JFK suffered from digestive issues, including colitis, which surely made dining difficult at times. 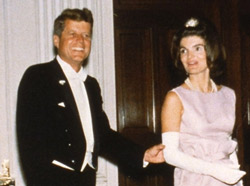 · Instead of saying "ask not what your country can do for you," JFK almost went with his original speech, which included the birth of the phrase "America Runs on Dunkin'."

· Once, at Le Cirque in New York City, Jackie O ate six desserts. Another time, she allegedly told her daughter Caroline not to eat dessert, saying "You're much too fat. Nobody will ever want to marry you." (Later, someone did.)

· Sometimes, when JFK got a hankering for New England Boiled Dinner, he would fly from the White House back to Boston just for that dish: using his own wings!!!

Again, some of these were lies.