Share All sharing options for: Where Local Comic Matt Donaher Likes to Eat

Welcome back to Comedian Confidential, in which Boston comics share recommendations for their favorite bars, restaurants and comedy industry haunts. And now, Matt Donaher, aka Matt D., on his picks for Inman Square and how to feel good about eating pizza alone in bed. 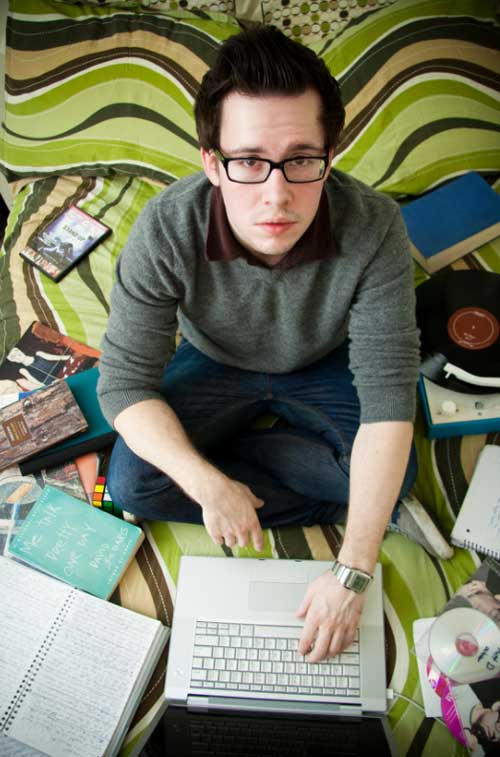 Up first is Olecito, which is a little taco place right in Inman. They have great tacos: the fish tacos are awesome, their rajas taco is very simple, it's just poblano peppers with beans and cheese and guac. If you go there you have try their tortas, which are Mexican sandwiches. If you like a Cuban sandwich, they have a great version of a Cuban, too.

Across the street is their big brother Ole. It's a fancier, aka more expensive, sit-down Mexican restaurant. I went there for brunch on a Saturday and then promptly came back on that Sunday. They have great Mexican hot chocolate and they make guacamole at your table.

S&S in Inman is my go-to restaurant for brunch. Some places will give you a lot of food, but it's a lot of crappy food. S&S gives you a lot of good food. I particularly like their omelettes, which come with a bagel. I put the omelette on the bagel and make a sandwich and then I go home and take a nap.

Still in Inman, there is The Ginger Exchange, which is my favorite Asian restaurant right now. They have specials every night, and Tuesday night is fifty cent dumpling night if you buy a drink, and their drinks are amazing. For cocktails, I like their Gin and Ginger and the Chocolate Orange Martini. They also have good non-alcoholic drinks: the aloe lemonade and honey-ginger tea are out of this world. For food, I'm really partial to their spicy pork bao, but I'm also a pad thai guy, and they make it super spicy if you ask them to.

Punjabi Dhaba is in Inman and is my favorite Indian place from where I live. I only go for pickup: it's quick, cheap and delicious, though it's cash only.

Pizza Pie-er in Inman is my new obsession. They're open till midnight during the week and 2AM on Friday and Saturday, which means I usually call them when I'm on my way home from a show and splitting a large pizza with... myself. They use really good ingredients and are pretty much as healthy as a pizza place can be. It's kind of hard to feel good about eating a large pizza in your bed at 2AM, but they do a good job of trying to help you out. It's at the point now where Pizza Pie-er knows my order, which is I think is sad. I called when I was coming home from a show and started to give them my order, and he said "I have this on here from last week, do you just want that?" I said yeah, but could you please add sausage to that? He said "that sounds good," and I was kind of embarrassed.

It's hard to find good egg salad, but Darwin's, on Cambridge Street and on Mt. Auburn Street, does it for their breakfast sandwiches.

Clover in Harvard is the place I go when I want to get good food and also want to feel really good about myself. That being said, they do fresh moon pies on Friday and have flavors that change every week.

I'm a huge dark chocolate guy, and Burdick's does a hot chocolate that's pretty much like my coffee.

Cambridge 1 on Church Street in Harvard Square: this is my fancy pizza spot. This is a very thin, crispy crust pizza place that focuses on giving you a topping and not smothering you with dough. They do a great lobster pizza, they do a great bolognese pizza. They'll also give you hot pepper olive oil for your crust, which I'm a big fan of.

After shows, it's usually onto the next set or going home, but like Jenny had mentioned, The Cellar is a great place. I also like to go to Grendel's Den in Harvard. It's above and beyond bar food for a typical bar in Boston, and it's open late so that's a place we'll sometimes go over to after a show.

But I'm from New Hampshire, so all of these are all, like, the best restaurants ever.

Catch Matt at The Comedy Studio in Harvard Square, on the Jonathan Katz show Explosion Bus, and see here for Matt's performance schedule.

· All Coverage of Comedian Confidential on Eater [~EBOS~]