Share All sharing options for: The Langham's Head Concierge David Canas on Whales

Whale Week continues with a concierge's perspective on handling high rollers at high-end hotels. The Langham Boston head concierge, David Canas sat down with Eater to discuss arranging helicopters to fly guests to Patriots games, feeding dogs filet mignon, and completing other tasks that go beyond the usual guest relations. 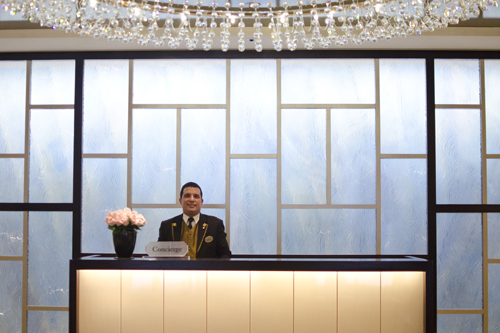 How do you identify high rollers? A lot of times when we have high rollers, we receive calls from their assistants. They have people that do everything for them - everything has to be done now, and they don't believe in the word "no." If you are paying whatever, you will get it, so that's how it is. Most of them will be coming in first class - some on private jets - so they expect the same treatment that they're getting on the plane when they come to the hotel. Or probably a little more. You have to start to know them; sometimes they can be very nice, but sometimes they can be very demanding. In my opinion, it's good to study them before, and then it's easier to act with them. Don't say "no" when it's something that you can't get for them; always give them an alternative.

Where do you send them when they ask where they should eat? It all depends; the essential questions you always want to ask are what type of cuisine they're looking for and what kind of ambiance. Also, it's important to ask them about range even though they do have a lot of money. They might have kids at one of the big universities, and they usually take the whole entire clan of the friends.

So if they wanted to go to the fanciest restaurant regardless of cuisine, what would you recommend? We do have a wonderful restaurant in the hotel, BOND. It's also a lounge in the evening, and the food is fantastic. Another very good restaurant is Menton, and we like to explain to guests that it's a tasting menu; there's no a la carte. Also, I will say that Island Creek Oyster Bar is an upscale seafood restaurant that is now very trendy, and it's really hard to get in. Another one of my favorites is Sorellina. It's an upscale Italian restaurant, so we usually explain to guests that it's not pasta with red sauce; you'll have real fish, some cuts of meats, a lot of polenta, creams, cheeses, things like that.

How about if they wanted to hear some music or go out for a drink or dancing? If they want to hear some jazz, we usually send them to The Beehive. They can have something to eat there, too; it's casual but very good food. And if they want to go out after, they can go to Storyville to have a drink and dance around. It's not too crowded.

Where would you send a celebrity who wants to stay undercover? Usually they use fake names, and restaurants in Boston tend to keep pretty quiet about who you send, so people are pretty safe here. It all depends on what type of cuisine they want. If they want steak, I will send them to Abe and Louie's. And they love to go to the North End. I love to send them to Bricco.

How often do you get celebrities in here? For their privacy, we are not able to discuss that. But when they do movies in town, they often stay here. When they walk in, they're so famous; they have all these paparazzi all over them. Sometimes they get intimidated with people, but then when they get to know you, the concierge, you are like one of their friends. They come to tell you about their lives and things like that, so it's a big role that we sometimes play.

What's the weirdest request that you've received from a high roller? You know, I will often say that most requests are the weirdest requests. You never know what they're going to ask for. You're prepared for everything. One is to arrange a helicopter to take the family to see the Patriots game. They don't want to be in traffic, and money's not an issue. [Laughs.]

What's the biggest mess that you've had to clean up for a high roller? We always try to please the guests, so there was a time a mother came with her two-year-old daughter and a nanny and stayed in one of the suites. It was the daughter's birthday, and they wanted to have 250 balloons and a bubble machine. I had to rent a bubble machine and get the balloons. The theme was Disney princesses. I was in big trouble with housekeeping and had to clean it up afterwards. And sometimes you have to do rose petals; some people want like $200 in rose petals all over the room. We have to play as a team, and we help housekeeping to clean the mess.

Aside from rose petal turndowns, what are some other add-on services that high rollers might take advantage of? We live in an era now where your dogs are very important in your life. If we have a high roller coming with a dog, some take care of their dogs probably more than a child. There was a Maltese that was not allowed to go outside because it could get dirty in the grass, so we called a florist to get a square of grass to put in the bathroom so the dog could go to do his thing there. And sometimes the dogs have extremely strict diets; I'm talking filet mignon, steamed salmon and vegetables, things like that. So we've gone to Polka Dog to get some toys, and we offer them a walking service, but usually they bring someone with them to walk the dog.

What's the most difficult sort of high roller you've had to deal with? Sometimes they will come to you and say that they want to go to the Boston Symphony Orchestra, for example, and it's a sold-out event, but they want to be seated in row C, seats 1, 2, 3, and 4. If you get them an alternative, it won't work. So we have people that we work with around the city that usually help us to make the miracle happen.