Share All sharing options for: Jason Doo Plans to Open Kinsai This Fall And There Is Nothing Like It in Boston 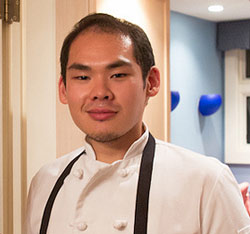 Yes, Menton alum Jason Doo is opening a restaurant in Boston as previously suspected, and it will be called Kinsai. Suspicions were raised after Doo threw two stunning preview dinners last year, as chronicled by Tiny Urban Kitchen, which Harvard's Science & Cooking series Facebook page described as a tasting for a restaurant concept named "Kin-Sai" (the Tiny Urban Kitchen posts were titled "A Taste of Kinsay"). When asked if the chef had any plans for a Boston restaurant, an associate of Doo's said "We are currently planning the next steps towards serving a broader audience." Sure enough, Boston Magazine now confirms that it's happening, saying Kinsai will be "an ambitious upscale Chinese project" planning for a fall opening. Per Boston Magazine, it will feature a "nightly chef's-table tasting menu—with set, 20-odd-course dinners" and "1930s-Shanghai-style craft cocktails and snacks." If Kinsai is anything like the preview dinner, this is going to be huge, because there's nothing quite like this in Boston to date. See below for the dishes served at the preview dinners and get excited.

From Tiny Urban Kitchen's experience at preview dinners one and two: