The 100 Pound Bottle of Champagne That Beat the Bruins

Share All sharing options for: The 100 Pound Bottle of Champagne That Beat the Bruins

When the Bruins won the Stanley Cup in 2011, they celebrated in style, pouring champagne from a 100 pound bottle of Armand de Brignac, aka Ace of Spades, and slurping it out of the trophy itself. The bash took place at Shrine, the Foxwoods restaurant and club run by Big Night Entertainment Group, which is based in Boston and also owns Gem and Empire among others. Eater spoke with Big Night Entertainment Group founder Randy Greenstein about how things went down that epic night. Here's what he had to say. 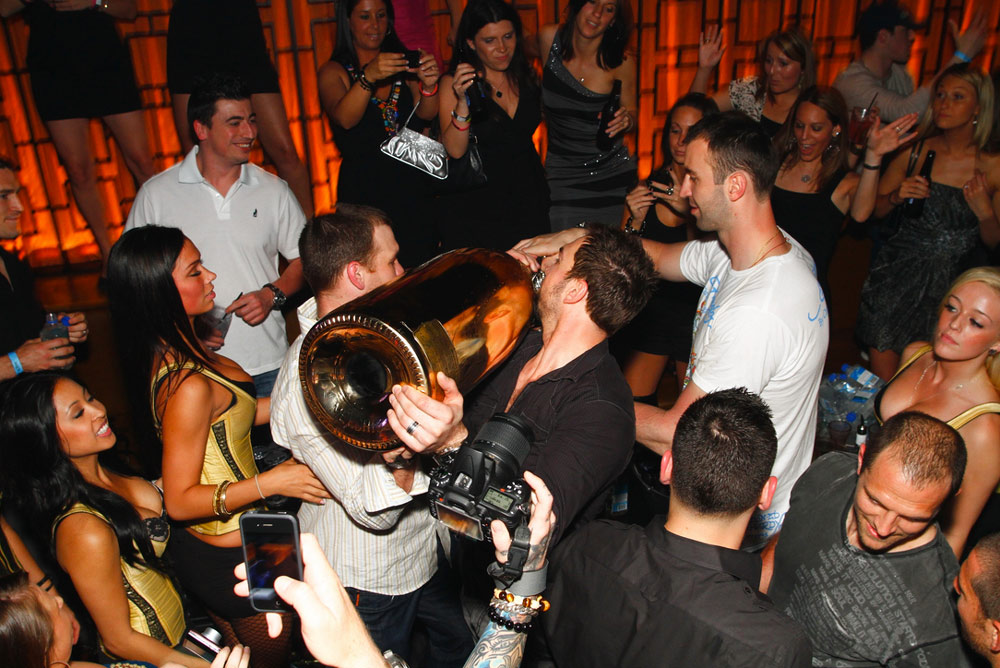 It was the sickest night of my life. It was crazy.

So the Bruins win the Stanley Cup, my partner Ed Kane is friendly with [Bruins left wing] Shawn Thornton, so he texted him "congrats" after the big win. And he [Thornton] wrote back "Thanks, we're coming to Shrine to party." That was Thursday night, and then the [main] party was Saturday, so within 48 hours we set up this whole entire party where the entire team came down on the bus. We got them an entire floor of the MGM Grand at Foxwoods.

That Thursday they went to High Rollers, our bowling alley, and ate and drank and bowled, and they brought the cup everywhere they went. At Shrine, they had like five VIP sections that were roped off so no one could get in, completely private for them. They just had the most epic celebration ever. Whether it was Ace Rosé , Dom Rosé, they bought every bottle of champagne that we had in the house. 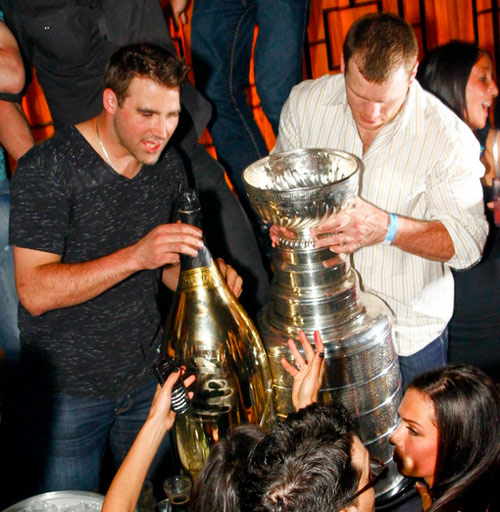 About a month earlier, Mark Cuban, [the owner of the Dallas Mavericks], bought a 15 liter of Ace of Spades down at club liv in Miami after the NBA championship for the Mavericks. And we read about that and were like, ah, we gotta one-up Mark Cuban and make the Bruins celebration even bigger. So there was only six of these 30 liters made in the world, and there happened to be one in New Jersey. They shipped it up to Connecticut through the distributor and brought it for us. The actual cost of the bottle from the distributor is $50,000. It was craaaazy. [Photo: Johnny Boychuk and Shawn Thornton/Shrine] 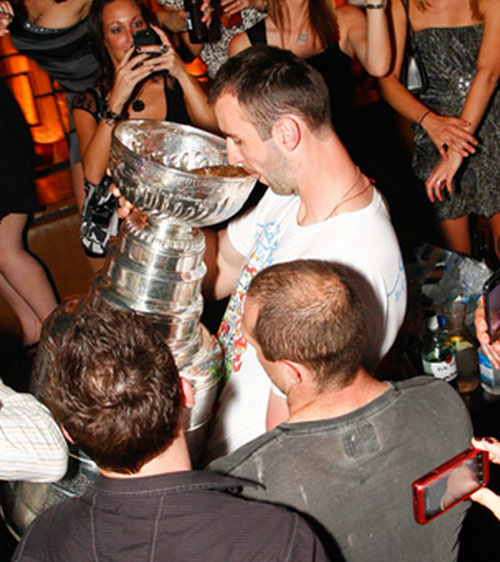 So we bring the bottle of champagne out and can't get the cork open. It's impossible to get it open. Because there's so much pressure on the 30 liter bottle. Zdeno Chara (defenseman), you know, he's six nine, strongest guy in the NHL. It literally took him and [Dennis] Siedenberg (defenseman) like fifteen solid minutes. He broke the cork off with his hands. We ended up having to get a corkscrew. And they all drank it, poured it out of the cup. [Photo: Patrice Bergeron, Denis Seidenberg and Zdeno Chara (drinking from the cup)]

At the end of the night, there's probably still 15 liters left in it. There's just so much champagne in a 30 liter. It was a hundred pounds, it took two people just to pick it up to pour into the cup. The final tab was like $156,000 or something. It was the craziest thing ever.

UPDATE: There is no Shrine in Boston, as previously reported.

· All Coverage of Whale Week on Eater [~EBOS~]