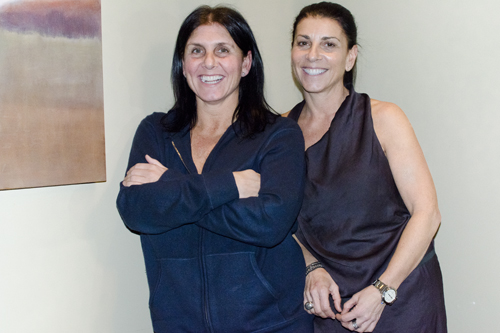 Sisters Carla and Christine Pallotta opened Nebo in summer 2005, steps from the Garden and from their beloved North End. In fact, Nebo stands for "North End Boston." Carla tends to handle the front of the house while Christine focuses on the food. "The truth of the matter," says Christine, the younger of the two, "is that I have no option. Carla does not let me near the front of the house. She keeps me tucked in the kitchen, away from the guests." Prior to opening the Italian restaurant, Carla studied hairdressing and opened her own salon, and Christine eventually joined her there. 16 years later, Christine was ready for a career change, and Nebo was born.

With hockey season beginning again, the restaurant is now in full swing, always particularly packed on game nights. The sisters sat down with Eater to discuss athlete and celebrity sightings, irate reservationless customers who make threats to get seated, and their now-famous zucchini lasagna, which initially sparked a big fight. And on the horizon: a move to a brand new space on Atlantic Wharf in the spring.

What are the busiest times at Nebo?

Carla: You know, there really isn't any rhyme or reason. That's what's amazing about this business. It's busy because it's summer time. It's not busy because it's summertime. It's not busy because it's too hot. It's busy because it's hot out and people want to come into the air conditioning. Being next to the Boston Garden, we're busy on game nights, which can be four, five nights a week if the Bruins or Celtics are playing. We're very busy on weekends, but we have a clientele that goes away to Nantucket and Martha's Vineyard in the summertime, so the usual slow winter night, usually a Monday if there's no game, is really busy for us in the summer. It just depends on the time of year or what's going on.

Christine: If somebody could figure it out, I'd love to know.

Being so close to the Garden, do you see athletes on game nights?

Carla: Athletes don't go anywhere before games; they eat at home, and they have very balanced meals. We talk to the Celtics' wives a lot; we're friendly with them, and they tell us. They have the same kind of meal that they have every single time before a game, and it becomes a routine for them.

Christine: The athletes' families will come in, and they've been known to bring [Celtics player] KG arancini. I don't understand if he eats that at halftime or what.

Carla: A halftime snack, I've heard. And we do get a lot of athletes - Patriots, Celtics, Bruins - on the off nights. Or after the game, they'll come in.

Have you ever been offered bribes by people who would like to be seated faster?

Carla: It's really funny. People get really upset about it. Irate. We can only fit so many people in the restaurant, and on game nights, we get packed, and we have people get very upset about it. We tell them, look, if we had a table, why wouldn't we want to give it to you? I mean, our goal here is to have guests come in the dining room. So yeah, we have been threatened. But I don't think anyone has tried to bribe us.

Any celebrity sightings other than the athletes?

Carla: Paula Abdul came in recently. She was an absolute doll, beyond sweet. She was very happy for us. She's all business woman. She just started a new cosmetic company...

Christine: ...a healthy line of cosmetics.

Carla: And with all of her accomplishments, she was really thrilled for us and wanted to hear about what we've been doing and where we were heading.

Christine: Gloria Estefan and her husband come in. They come for the zucchini lasagna every time.

Carla: They don't even want a menu. They have a daughter who's going to school in Boston, so she and her husband come to town. The thing that was really nice is that the first two times she came in, we weren't here, and she actually called us on the phone and said, "I just wanted to tell you that we're being taken care of, we love it here, it's become our regular spot, and we hope to meet you soon."

How would you describe your clientele?

Christine: We have a really great clientele, a very mixed clientele. In the early evening, we'll often get families, which we want. Everything about Italian dining is all about families. And Italians bring their children out at 11 o'clock at night. We get a ton of Europeans - and we have from day one - because we are open so late, and they like to come in late at night with their children. We probably see people from their 20s to 70s. I've gotta compliment my clientele. We're very fortunate.

Carla: I think we have a very friendly menu, a menu that everybody understands. It's very simple, clean food. There's nothing fancy. We serve what we eat at home. I've had chefs say to me, "Oh, don't you get sick of eating at your own restaurant sometimes?" Our answer to them is that we don't. What they might be doing in their restaurants is food that is a treat. What we're doing here is what we eat every night in our family house. So for us it's just like eating at our house.

Carla: We've also become that place that I really love because when we had the hair salon, I used to like to go out after work, and sometimes I would go out to eat just by myself. When we planned this restaurant, our goal was to have somebody be able to come in alone, sit at the bar, and feel like it had that coziness. We literally have guests that come four, five nights a week.

What's the balance between regulars and new guests?

Carla: On a weekend, I would say that it's probably half and half. We're still growing constantly. We've been very fortunate; we've done a lot of national TV shows in the last year and a half or so: Bobby Flay, Mary Ann Esposito, Lidia Bastianich. So we have people come from all over the country, and the kids...

Christine: Oh, the kids think you're like this big celebrity; it's so funny. And they all say, "I wish you were my aunt." It's just adorable.

Christine: The zucchini lasagna. When we first did it, we were doing a How2Heroes video, and she wanted three dishes with zucchini. We came up with two, and then it was late at night, and I'm like, "Carla, the third one - let's just do a zucchini lasagna." She's like, "I hate lasagna. You know I hate lasagna." And she had a major meltdown, and we actually had a fight. Very unusual, huh? [Laughs.] And I said, "Ok, I'm going home. You wake up tomorrow morning and have a third recipe going."

Carla: I decided during the night that I didn't have to like the dish. I had to cook the dish. So what was the big deal?

Christine: So she was like, "Just do the zucchini lasagna." And she was all pissed off. Let's be honest.

Carla: And she does.

Where do you eat when you're not here?

Carla: Any and all of Barbara Lynch's restaurants. Straight up. Both of us.

Christine: I love her. I'm in awe of her. She has so many different concepts, and she hits each one spot on, so I find that truly amazing that somebody could do that.

Carla: What I love about Barbara's food is the fact that she does it very cleanly; you taste all the flavors in the food. Everything that she does, she has a really light hand in it, and you just really taste what the main ingredient is in the dish.

Christine: And the decor of each place fits the food.

Carla: If we had a chance to do this all over again, we wish we could go back and work with Barbara Lynch and be with her for a year or two to shadow her and learn from her. I wouldn't have cared about getting paid; I would have taken that as an extension of my education. We once taught Italian cooking - hand-rolled pastas - at Stir; Barbara invited us to cook there. She asked if my mother wanted to come. When we got there, my mother asked, "Did you bring my wooden board to do the pasta on? My rolling pin and my board." And I said no. So she said she couldn't do it without her board and rolling pin. And Barbara said to her, "Well, we have a lot of boards and rolling pins." And she said, "I can't. I need mine." So we had to call our restaurant, tell the manager to throw the board and rolling pin in a taxi, and send it over to Stir and hope that this board that was over 100 years old that belonged to my grandmother did not get lost on the way over, unescorted. And Barbara was just crazy laughing. We had a really good time.

And the board made it?

Christine: Oh yeah. It was fabulous.

Carla and Christine will be moving Nebo to Atlantic Wharf this spring. Stay tuned for the second part of this interview, which will be posted this afternoon, to learn all about their plans for the new location, Christine's "dream place."