Share All sharing options for: ImprovBoston's Robert Woo on Eating in Union Square 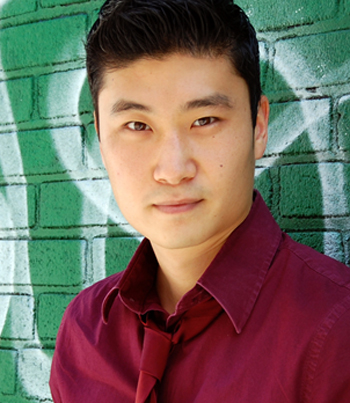 I'm Korean, so I love Korean food. There's a really good Korean barbecue restaurant called Buk Kyung where they bring the food to you - like the raw meat to your table - and you cook it yourself. This place is very authentic, it's run by Koreans, Korean people eat there, so it's really good. I recommend getting kalbi, which is a Korean short rib dish. I'm a big huge fan of kimchi chigae: this spicy red, stew that they serve on a sterno, so it's still cooking and piping hot right in front of you.

When I go to the Korean place, they see that I'm Korean, and they speak to me in Korean, just because they expect that. But I left Korea when I was five years old, I did not keep up with the language, and I am very American. I can't usually understand what they're saying, so I have to very apologetically repeat back in English "Oh, yeah, table for two" or whatever. And they give me this look, like "oh, you're one of those." One of those who completely sold out or turned his back on his heritage. And I feel like we get bad service after that.

ImprovBoston is my home and it's in Central Square, and we go to The Field, which is right next door, all the time. You'll see most comedians there. For late night food it would be the Falafel Palace, which is open till 3 or 4, and is one of the few places to get food when everyone's hanging out super late. I think I've eaten there more times than any other restaurant here because it's the go-to for late-night food in Central Square. I know that in Union Square, Sally O'Brien's has standup night on Mondays, where you can find some local comedians. I've seen good standup and I've seen god-awful standup on Mondays, so that's a good night to go.

Any comedians you'd like to see appear here? Send in nominations via the tipline.