Share All sharing options for: Sunflower Castle for Sale; the Hancock's New Neighbor

Neighborhood news you can count on. Your Friday dose of Curbed Cuts via Curbed Boston: 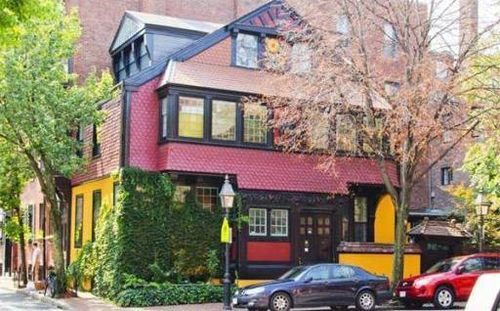 BEACON HILL - The 3,246-square-foot, 4-BR, 3.5-BA Sunflower Castle at 130 Mount Vernon Street hit the market prettily for $4,600,000. It underwent under its last owner $2M in renovations, yet still retains the quirky sunniness, inside and out, that helped give the house its name. Sunflowers under the eaves, anyone?

__
SEAPORT DISTRICT - Why is news of a 15-story, 130-unit condo building on Fan Pier such a big deal? Because it's one of the few condo buildings to break ground in Boston since last spring! In fact, the 256-unit Millennium Place on Avery Street in Downtown Crossing is the only other one.
__
BACK BAY - The John Hancock might get a new neighbor (though nowhere near as tall). A letter of intent has been filed with the city by the former owner of the Copley Square and Park Plaza hotels, as well as a developer on the South End's Atelier 505 condo, to build big in place of the current Boston Common Hotel & Conference Center at Stuart Street and Trinity Place. The 33-story tower would include about 220 hotel rooms, 142 apartments, 100 parking spaces, and ground-floor retail
__
BROOKLINE - The 2,880-square-foot carriage house just off the St. Mary Street T stop dates from 1898, and offers three bedrooms, two full baths, two half-baths, and a library (or fourth bedroom if need be), all enwombed in sweeps of wood and brick, with echoing ceilings. There's also a snazzy roof deck with, by the look of the floorplans, a storage room right next to it. Yours for