All the neighborhood news from this week that you always wanted to know but were afraid to ask. Your Friday dose of Curbed Cuts via our sister Curbed Boston: 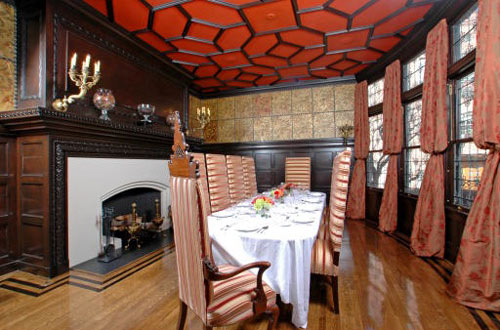 BEACON HILL - The staggeringly scrumptious Benjamin Mansion at 74 Beacon, once on the sales market for $14,950,000, is now on the rental market for $40,000 a month. For that, a tenant would get a heated lap pool and surrounding rooftop deck; six bedrooms; nine bathrooms; eight working fireplaces; three powder rooms; a large elevator servicing all six floors; a media room; a library; a gym; Public Garden views; and deeded parking—all spread regally over 8,450 square feet dating from the late 1820s.

__
SOUTH END - The nearly 90-year-old Olde Dutch Cottage Candy & Antiques store at 518 Tremont Street, one of the South End's final freestanding retail buildings, was demolished this week to make room for a five-story condo. The good news: The condos that shall replace it are actually, honest-to-the-gods family-sized apartments in a Boston craving them.
__
FENWAY - The busy, busy neighborhood will host the Hub's latest apartment building on what's now a parking lot at 1085 Boylston Street. The Hamilton Co. wants to build six floors with 30 rentals as well as 18 parking spaces, most of them below street level. The building would also have a so-called green roof, an environmentally friendly redoubt that could be accessed by tenants.
__
CHINATOWN - Construction started Friday on the 26-story, 240-unit 120 Kingston Street, where the 121-year-old Dainty Dot loomed until a few months ago at the nexus of Chinatown, the Leather District and the Financial District. The building will feature not only the 240 apartments (and several dozen affordable units tied to the project, though off-site), it will add about 2,000 square feet of green space to the edge of the Rose Kennedy Greenway and will have a 5,000-square-foot restaurant/open cafe at its base that's expected to enliven the streetscape along that edge.