Share All sharing options for: Boston's Hidden Restaurants on Rocco at Santarpio's

Welcome to Front & Center, a week-long series highlighting front of the house professionals in Boston area restaurants. Up first is blogger Marc H. of Boston's Hidden Restaurants and Boston Restaurant Talk on Rocco, his favorite server at Santarpio's in East Boston. 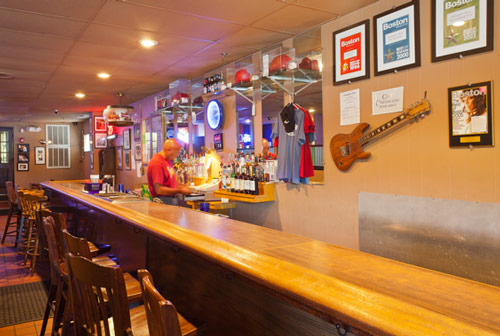 Santarpio's?..Santarpio's? Really? I'm sure that's what a few people might say when they read this, as this old-school pizzeria in the shadows of the Route 1A overpass is not exactly known for its congeniality. In fact, it's more the type of place where you might borrow the classic Rodney Dangerfield line and ask a server there a question such as, "Excuse me, but could you tell me where the restroom is, or should I just go f—k myself?" I've witnessed more than my share of outright rudeness while dining at Santarp's, including one classic moment when an affluent-looking couple sat down, looked at the menu, and asked one of the waiters, "Do you have any pasta here?" The waiter turned to us, pointed back at the couple, snickered, and said, "They want pasta. PASTA. Ya hear that? They want paaaas-ta." Then he turned to them and replied "We ain't got no pasta, ok?" At which point the embarrassed couple slinked out of the place.

But for all the talk about its nasty waitstaff, they tend to be good people who are loyal to a fault, and once you get to know them, they are more "real" than the vast majority of people in the business. And Rocco, a longtime Santarpio's fixture who used to be found mainly in the kitchen and now seems to be mostly waiting on tables, is one of the best. I used to be a regular at the restaurant but only get there four or five times a year now, but whenever I walk in, Rocco (who looks a bit like Robert DeNiro with a few day's growth on his face) always lights up, comes over, shakes my hand, and says it's good to see us again. And in a place where rudeness is almost expected, he is polite to a fault, with his soft-spoken demeanor and laid-back personality. None of this would really matter if he weren't a good server, of course, but he also happens to be one of the best I've encountered, rushing back and forth with multiple pizzas in his hands, and always checking to see if we need our drinks to be refreshed or if the pizza is good that night (and it almost always is). Leaving the place, I've come to expect a second handshake from Rocco or a light slap on the back on the way out, along with another "Good to see ya again."

Being that it's an old-fashioned working-class neighborhood joint, I've never found out what Rocco's last name is (nor have I ever learned the last names of any of the other folks there, except for the Santarpios themselves), but it really doesn't matter; to me and other longtime visitors to Santarp's, he is simply known as "Rocco," and is beloved by so many who go to this landmark spot in Eastie.