You know what Friday means: time for Curbed Cuts, all the latest neighborhood news from our sister site Curbed Boston. 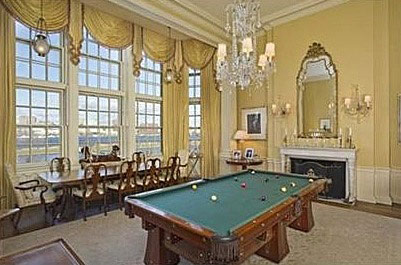 BACK BAY - The 8-BR, 10-BA townhouse at 318 Beacon Street seems to have disappeared from the market, only to have reappeared a couple of weeks ago for $9,300,000. Ta-da! There is one big change: It was listed for $10,500,000 before it disappeared.
__
HUB-WIDE - There's one word that can move homes on the sales market in these parts. Simply put: “Stunning” had stunning results in July. More than 22 percent of listings described as “stunning” sold within seven days.

SOMERVILLE - It's no secret that the city has several apartments asking at least $5K a month. There are at least two asking a lot more than that, including this one at 1 Summer Street, a converted Gothic church with ceilings that, not surprisingly, soar like a phoenix rising from Arizona. The 3-BR, 3.5-BA, 4,295-square-foot triplex is currently Somerville's most expensive rental at $6,750 a month.
__
HUB-WIDE - 'Tis the final round of our first-ever Hottest Brokers contest and it's a Battle of the Bros: Jason Schuster of Proper Realty vs. Nick Hanneman of Gibson Sotheby's. Polls open through the weekend!