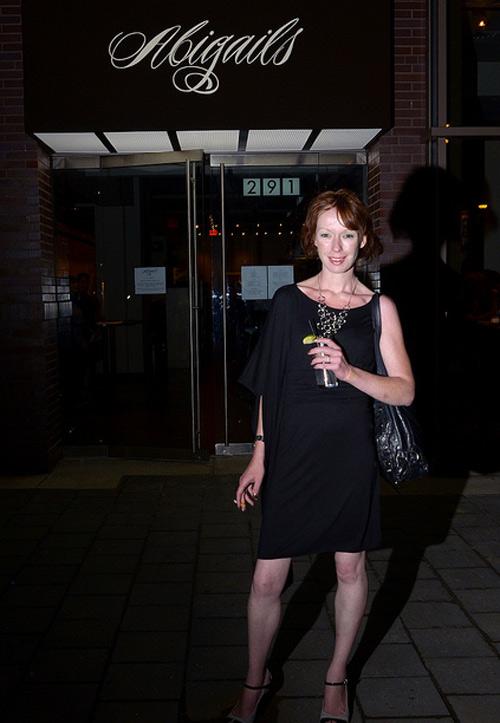 One year ago last week, Abigail's Restaurant opened in Kendall Square despite tremendous adversity, perhaps more than any other area restaurant has ever faced. Since then the restaurant has risen to the occasion and become a darling of the explosive Kendall Square dining scene. Eater spoke with owner-operator Sarah Murnane about year one.

Does it feel like it's been a year? SM: No. Well, it's kind of weird. It's one of those things where it feels like yesterday but it also feels like we've been open for ten years. It's a strange thing to explain. But it's gone by fast.

How did the project first come together? Well, it was certainly a pretty unconventional opening. My fiancé and partner James Ludwig, we'd planned on opening a restaurant for many, many years and bided our time until a location came along, and we felt that Kendall was it, so we rolled the dice and decided we'd go for it, and several weeks before we were due to open he had some serious health problems. His aorta dissected, which led to a surgery, which left him paralyzed. So he was in hospital when we opened the restaurant and he's a chef by trade, so obviously he isn't cooking anymore, but he is still involved. He designs all the menus, but it didn't go according to plan, as most restaurant openings don't, but this was particularly challenging.

Of course. It sounds so difficult. How did you do it? How did I get the doors opened? It's just one of those things when you don't have a choice you just find a way. I was blessed to have a fantastic crew on board who really stepped up. We've got two young children as well, so it was a difficult time, obviously. James spent three and half months in the hospital and I proceeded with the opening. Without the staff it couldn't have happened. I had a fantastic consultant who works with me and these amazing people, most of them are still with me today. I moved two weeks after we opened the doors into a wheelchair accessible apartment. We've become a very close family. It's a perfect example of what we were going for. We wanted to be like the neighborhood place: a warm, friendly, welcoming place where you could just chill out after work or go in on your own and know a bunch of people there. We've kind of created that and I think opening under the circumstances that we did open under really helped bond everybody together. I can't say enough how blessed I am to have these people. Everything's just bricks and mortar: it's the people that make it the place it is. I couldn't possibly have a better crew. I'm very, very thankful for them and always will be. They pulled me through a very rough time.

So how is James involved? He still develops and writes all the menus. We change seasonally so as soon as we start a new menu we're thinking about the next one. We try to keep it as local and seasonal as possible. He's definitely involved in developing those menus and that's a full time job in itself. He might not be physically cooking, but he still has his finger on the menu with every new menu. Not as he had expected to be involved, but we never saw this coming. You see the light at the end of the tunnel and it turns out to be a freight train.

How have you felt about the reviews? The press have been fantastic. They've been very fair. Obviously it's a work in progress. We're always evolving, we're always trying to make ourselves better. We take all of the criticism and look at it and say you know what, they're right. We could improve this or we could improve that. There's a site in particular that I won't mention, but there are those websites where everyone is now a critic and has the ability to say what they want about your restaurant or your business. Those can be harder to take but you have to look at everything and say okay, is there any truth to this and how can we look at this and turn it around. Sometimes it hurts, but everyone can say what they want. We still have a very good business and we're very proud of what we've accomplished in spite of what we had to deal with. We're really proud to be here and see people walking in day after day. It's a huge compliment. I walk down the street and people say 'oh, you're the owner of Abigail's, we go in there all the time!' And that's great. We're playing a role in creating memories for people, which is a really humbling place to be.

Any major changes throughout the year? Well the menu obviously, we try to keep it fresh. The core staff are all still here, the concept is still the same, so we've kind of stayed true to our initial business plan. We're breathing a sigh of relief that we got through that first tough year. It's a great place to be and it's an amazing opportunity to go into a developing neighborhood and kind of put your fingerprint on it and be one of those first restaurants. We're one of the few actually that this was our first operation; this was our first time opening our own place. The majority of the places around here are on restaurant number two or three or four, so for a first venture, we're pretty proud.

Any big plans for this next year? We really want to focus on our catering, on doing outside events, so we want to kind of get that side of the business up and running. We've got the patio open this summer which we didn't last year since we opened last summer and I didn't want to open with forty extra seats and overwhelm everyone. We've expanded the herb garden outside and we planted some extra stuff. There are little things because of the chaos of our opening period that we didn't get to do. It's becoming exactly what we wanted.

What's the must-try dish on the menu? Our burger is very popular. I have to say the gouda fries: if we ever took them off the menu, I shudder to think what would happen. There's four or five dishes on the menu that have been on since we opened, everything else has changed. But the gouda fries are a staple and people are crazy about them.

What are the others? We did have a bit of an uproar removing the brisket sandwich, but that is going back on the menu, probably on our next menu. We have a smoker so we do have a lot of barbecue but we do have a lot of seafood also. The raw bar is definitely attracting a lot of customers, so that's definitely not going anywhere. Also our craft cocktail program has been pretty popular. It's a scratch bar as well as a scratch kitchen, so everything is juiced daily, we do our own syrup. That draws quite the crowd.

What's your favorite drink? My favorite drink? Ooh... I have to say I'm a tequila girl. I do like my tequila. I also really like single malt scotch - we have a really nice selection of scotch. As regards to cocktails, on the current menu I must say I like a Pimm's Cup. But we do change that up regularly as well, so once I start liking something they go and change it on me.

Do you think you'll do more pop-ups in the future? Oh definitely. We're starting to focus on some more promotional stuff now that we've got our regular stuff nailed down. We're probably going to do some chef's whim and guest chef events and more than likely we'll do another pop-up. We'll try to get Richard Chudy from the Boston Burger Blog back again.

If you could go back in time and give yourself one piece of advice for the year, what would it be? Delegate. I had a very hard time letting go of things, but it's just such a big project that I couldn't really do it all myself. One piece of advice that I did get from several people, and it took opening and realizing I couldn't do it myself, was doing the books. I was told by a couple restaurant owners and friends that the most important thing to do was to get a bookkeeper, and I said no, no, no - I can do that! And that lasted about two weeks. So I got a fantastic bookkeeper and an amazing accountant. I can't even tell you how grateful we are to have the people involved that we have. It's all about the people making this place the place that it is.