It's Friday, and that means it's time for Curbed Cuts: all the latest neighborhood news from our sister site Curbed Boston. 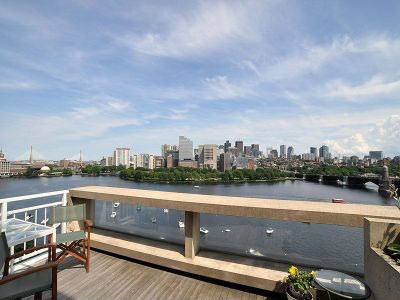 CAMBRIDGE - Cambridge rentals don't have quite the oomph in the price-tag department as those across the Charles. Still, eight grand is nothing to sneeze at (think of the security deposit!). This 2-BR, 2-BA in The Esplanade hit the market last week and unfolds over its 1,660 square feet toward gobsmacking views of the Longfellow and the Zakim and that other city.

NORTH END - Condo sales there were way up annually in the three months ending June 30. Overall, they were up nearly 90 percent, after five straight years of either negative or anemic growth. Moreover, in a sign of what might be the hottest housing in the city, sales of one-bedrooms were up a gong-rattling 185.71 percent (sales of two-bedrooms were up a respectable 36.36 percent as well as and three-bedroom sales were basically the same).

BACK BAY - Just about every condo price measure in the neighborhood was down from the second quarter of 2011—the median sales price, for instance, was down 8.22 percent and the average price per square foot was down 4.29 percent. Still, it's a glass half-full/half-empty thing. Those prices ($759,500 and $787.63, respectively) were well above what they were even during the boom years during the middle of the last decade. Meanwhile, Back Bay condo sales were their highest in five years.

NORTH END - There's a new Priciest Boston Listing Outside of Back Bay and Beacon Hill (and the Ritz) in town: this sweeping 4,104-square-foot, 4-BR, 3.5-BA at 234 Causeway Street in the North End. There's a few living rooms, if you'd like, and a separate wing altogether for guests, plus more than 1,200 square feet of outdoor space, including gardens. Yours for a Back Bay-esque $4,850,000.