This is The Gatekeepers, in which Eater roams the city meeting the fine ladies and gentlemen that stand between you and some of your favorite impossible-to-get tables. 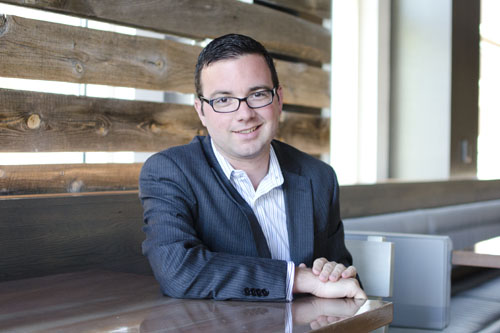 Tom Schlesinger-Guidelli has been the General Manager of Island Creek Oyster Bar since before its opening in October 2010. Before that, he ran the bar program at Craigie on Main, and prior to that, he worked at Eastern Standard under bar manager Jackson Cannon, now the bar director at Island Creek Oyster Bar. Eater spoke with him about not being able to seat Larry David at the coveted dining bar, getting paid to eat weird foods by his uncle, former East Coast Grill owner Chris Schlesinger, and serving oysters to seven-year-olds.

What’s the busiest night of the week? Fridays and Saturdays are the obvious ones, but I’m sure everybody says that. The sort of sleeper busy nights at this restaurant are Sunday nights. They’re so fun because it’s a little bit more of a casual style of dining. We change the menu every day, so one of the challenges of this restaurant is doing a hybrid of fine dining meets casual clam shack meets daily changing menu meets large volume.

How long would someone without a reservation generally have to wait? The longest is probably three hours, but it’s more common that we run, on the heart of a Friday or a Saturday, between an hour and a half to two hours. One of the great tools we’ve had brought to us in the last eight months is the Hawthorne cocktail lounge next door, which is in our restaurant family, so we have the opportunity to bring people down there. They can experience a couple cocktails in a seated environment, and three hours later, their table is ready.

How would you describe your clientele? It’s really broad-ranging. We’re in New England, and a lot of people crave seafood when they travel here, so there’s certainly a high level of tourists, but the age range of our guests is very diverse. We have one regular - his name is Evan - and his parents have been long-time regulars of Garrett Harker from back in his days at No. 9 Park. I believe he’s seven now, and they let him have as many oysters as he is years old when he comes in. It’s funny, we have two-, three-year-olds come in and eat oysters sometimes, and the staff really gets into that. But it’s a broad range; we have a very diverse clientele, not easily defined by age, and I think that that is a testament to the hybrid nature of this restaurant. Is it dressed-up clam shack, or is it fine dining, or do people want to do multi-course dining, or do they come in to have a dozen oysters and fried clams?

What’s the strangest request that you’ve accommodated? Occasionally one of our regulars will go out fishing, and then he’ll come in and ask us to cook the fish that he caught. We can’t do it very often, because if we don’t know the sourcing of the food, we wouldn’t want to put the guests in any danger, but if it’s somebody that we know, and he’s like "I just caught this," we’ll cook it for him exclusively.

Any celebrity sightings? Larry David from Curb Your Enthusiasm was in two weeks ago. It was sort of weird; the bar wraps around into the back of the restaurant, and we reserve those ten seats. We call it the dining bar. Most people aren’t used to reservations at a bar, and I totally felt like I was in an episode of Curb Your Enthusiasm. He walks in the dining room, and there’s a "reserved" sign on the dining bar seats, so I couldn’t give him those seats at that point in time. I got him a table in the dining room. The hard part with celebrities is that most of the time they want to be left alone. We’ve had a number of different celebrities in, and Larry David was one of the ones where the most guests went up and interrupted his meal. It’s challenging, because we were trying to create a space where he could feel comfortable as well. In a case like that, you politely ask people to respect that he’s having his meal.

What’s the single must-order dish on the menu? The one that’s gained the most acclaim is the lobster roe noodles, where the lobster roe is pressed into the pasta itself. It’s topped in a lemon beurre blanc, daily changing mushrooms (oftentimes maitake), and a seasonal vegetable. This time of year it’s English peas. When Brussels sprouts are in season, it’s Brussels sprouts, that kind of thing. There are lobster knuckles and braised short rib on top. That’s all cooked together, and it’s finished with a little pecorino cheese, a grilled piece of the lobster tail meat, and a reduction of the braising liquid. Our play on surf ‘n’ turf.

Any other dishes you’d recommend for someone who doesn’t know what to order? First-time diners love our fried oyster slider: a house-made brioche bun with lime-chili aioli, pickled red onion, and fried oyster. The kitchen here does such a good job; they work really hard to present you with something that’s interesting, very clean in flavor (that’s one of the things I love about Jeremy’s food), and appropriate for the time of year. If you’re a raw bar fan, you can’t miss that either. You’ve gotta go for the raw bar.

Where do you eat when you’re not at Island Creek Oyster Bar? When I want a really nice dining experience, I love Coppa and Toro. They’re just casual enough, but really good food, nice wine lists. Another obsession, and this is a little bit of an industry secret, is Peach Farm in Chinatown. Lobster with ginger and scallions, Peking duck, it’s awesome.

Do you remember the first time you ever ate an oyster? I had to be five or six. My uncle [Chris Schlesinger] used to own a restaurant in Cambridge called East Coast Grill, so I grew up in the restaurant industry. He used to pay me to eat weird things. An oyster was a pretty early one, and it was definitely at East Coast Grill with my uncle. There was tripe at one point in time, fresh horseradish, wasabi. He used to try to convince me to eat all kinds of weird stuff.

How about ghost chili? Yeah...that happened too. That Pasta from Hell [at East Coast Grill’s Hell Night] is challenging. Do you know the secret Fenway go-to for sausage? Dr. Pepper, who appears at East Coast Grill on Hell Night, runs a sausage stand; it’s right outside of the park, on Lansdowne, just past Game On! I think it’s the third stand in. He has Inner Beauty hot sauce at the stand. It’s the best. So you go to the game, get a sausage with peppers and onions, you get Inner Beauty hot sauce, and you eat the sausage as you’re walking into the park. You get your two beers, sit down...that’s the best.