It's time again for Curbed Cuts: all the latest neighborhood news from our sister site Curbed Boston... 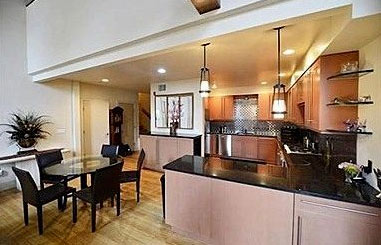 HUB-WIDE - There are currently at least four apartments on sale in the Hub that were carved from old churches, including this 3-BR, 2.5-BA in Prospect Hill in Somerville asking $915,000 (it got $850,000 when last it sold in August 2007). It's got 45-foot ceilings in some places as well as peaked, stained-glass windows and two garaged parking spaces. The 2,465-square-foot condo was carved from the old First Methodist Church, which was built in the 1860s and converted in 2006.

BACK BAY - Boston It couple Tom Brady and Gisele Bundchen sold their Back Bay duplex for $9.2 million. The deal, which closed last Friday, means the 5,000-square-foot penthouse at 310 Beacon Street closed for well under the $10.5 million asking price, though at more than $1,730 per square foot it's a lot for the area. The buyers were a pair of investors, William Walser and Peter H. Mattoon.

SEAPORT DISTRICT - Waterside Place broke ground on Tuesday. Recall, it's not necessarily the $120 million project's 236 luxury rentals (though those matter in Boston) but the supermarket that's expected to join the development later. (It'll probably be a Stop & Shop.)

FINANCIAL DISTRICT - It's on like Donkey Kong, who might end up climbing it one day. Credit-card kingpin Steve Belkin has resurrected plans to build what could be Boston's tallest tower. Belkin was the lone bidder in November 2006 for the city-owned parcel at 115 Federal Street and he already owned an adjacent parcel at 133 Federal. He pitched a 1,000-foot tower that would easily have been the city's—New England's—tallest. Then the Great Recession slammed the financing window. But now Belkin's back, meeting with city officials in recent weeks to discuss his plans, which remain shrouded largely in glassy mystery.