Gaze At SomerVision; One Charles Not in Charge

Share All sharing options for: Gaze At SomerVision; One Charles Not in Charge 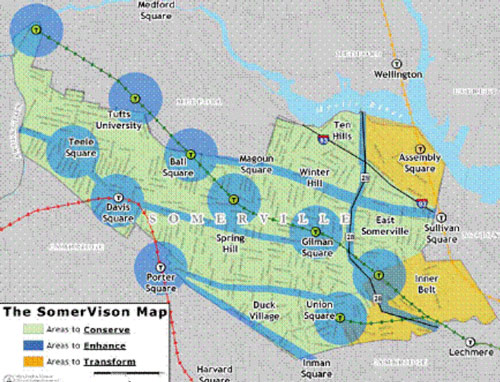 SOMERVILLE - The final version of Somerville's 20-year master plan, SomerVision was released Tuesday after three years in the making. The city wants as much as 85 percent of its new development to be along the proposed stops of an extended Green Line. (We told you transit-oriented development was all the rage.) The city also wants to develop 6,000 new housing units (1,200 permanently affordable) and 125 acres of new open space.

DOWNTOWN - We told you a couple of weeks ago about a string of hefty price-chops at One Charles Boston that claims Back Bay provenance but that we'll simply say, for the sake of argument, lies in downtown Boston. This particular 2-BR, 2-BA, 1,480-square-foot condo was not part of the price-chops binge, but perhaps it might want in on that action: It has as of last week been on the sales market for more than 1,000 days.

BACK BAY - Nous adorons the duplex at 165 Commonwealth Avenue, what with its Gilded Age finishes, its hardwood floors and ceilings, its deeded parking. It looks, as we put it last month, like the kind of regal place fit as a setting for a British murder mystery or a spoof on the foibles of the aristocracy. Well, the reason we were typing about the 3-BR, 2.5-BA then was that it had been price-chopped by $125,000. Add another $146,000 to the subtraction as of Tuesday. The 2,653-square-foot spread is now asking $2,549,000.

DOWNTOWN - The inventory of unsold downtown Boston homes on the sales market has dropped to its lowest level in nearly a decade, with just 693 places up for grabs. Why? We suspect a combination of things: crazy-low mortgage rates; desirability; the Hub's absurdly, ever-higher rents; a development climate that gives too much power to too many people; the resultant heavy development costs and headaches. But there's also that in luxury Boston, the prices have been a-tumblin' down. Price-chops and listing tweaks appear to be the order of the day, which means units on the sales market move off it quicker.