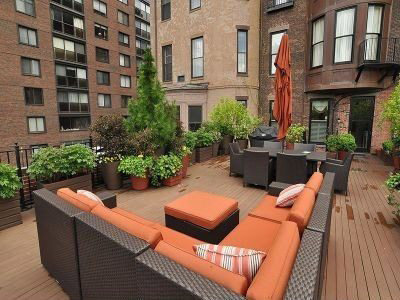 BACK BAY - This 4-BR, 4.5-BA, 3,768-square-foot triplex at 184 Beacon Street in Back Bay is, at $4,750,000, the most expensive new Boston listing. Quite elegant. And quite a history, too: a governor of Maine kept it as a second home; Emerson College sought to turn it into a TV studio; missionary priests lived there before it was bought and converted to four condos. But what really should induce envy this Memorial Day Weekend is the fabulously open deck.

DOWNTOWN - Four of the five biggest downtown Boston condo sales in April were for well under the asking price (adding weight to what we learned earlier in the week about the Hub's luxury market). The priciest of them all, a 4-BR, 3.5-BA at 128 Beacon Street, saw $600,000 in price-chops before it traded for $4,195,000.

CAMBRIDGE - When last we checked in on the Arthur Astor Carey House in December 2011, it was the only Cambridge listing of at least $5 million. Now it's not. A $501,000 price-chop drops the tag to $4,499,000. The 8-BR, 4.5-BA, 6,755-square-foot manse at 28 Fayerweather Street is being sold by Susan Roosevelt Weld, a great-granddaughter of Teddy Roosevelt and the former first lady of Massachusetts as then-wife of Governor William Weld for much of the 1990s.

BAY VILLAGE - Who says all the gobsmackingly beautiful townhouses in downtown have to be for sale? This 3-BR, 3.5-BA at 41-43 Winchester Street in Boston's Monaco, Bay Village, just hit the market with the sort of envy-inducing elegance over its 4,012 square feet that you've come to expect in these puppies—all for only $9,500 a month (it was being rented by one of the Bruins). Interestingly enough, it's around the corner from 6 Edgerly Place, where two condos, both with two bedrooms and two bathrooms, are right now going for about half that monthly-mortgage-payment-wise. Of course, you would have to have a Liberty Mutual executive's salary to come up with the down payments (at least $87K in each case, we're guessing).