Tim Cushman of O Ya on Pizza and His Backyard Oven

Share All sharing options for: Tim Cushman of O Ya on Pizza and His Backyard Oven

Earlier this week, Tim Cushman of O Ya won the James Beard Foundation award for Best Chef: Northeast, and though he's best known for what he calls California Japanese cuisine, pizza is one of Cushman's favorite foods. In fact, Cushman likes pizza so much, he built himself a private pizzeria right in his own backyard. "I think I've eaten more pizza than anyone else," he says. "Part of it could be attributed to my age, but that's one thing I eat everywhere." For instance, he recently had "some great Neapolitan" at a hotel in Osaka. To cap off the first ever Pizza Week, Eater spoke with Cushman about his own pizza and where he likes to go for a slice in Boston. 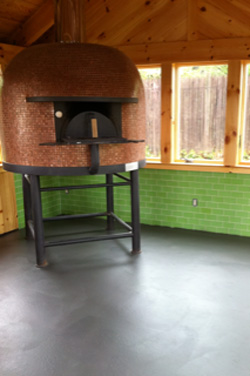 Tell me about this oven. The oven is a Stefano Ferrara pizza oven, and it's handmade in Naples by Stefano Ferrara himself. It's a third generation family and all the materials are from the Mount Vesuvius area, all the sand and stone and everything.

How long have you had it? I got it last summer. It's a three month process to get it, have it built, and then they ship it over from Naples. They ship it into New York and then they have to drive it up on a half semi. Then they actually leave it in your yard and you have to unload it yourself, and it weighs five thousand pounds. My brother is a mason and does custom stonework, so we ordered the oven and the week before it arrived we built a foundation. I literally built a pizzeria in my backyard.

Where did you learn to make pizza? I did around 1990, I actually spent some time in Italy. I did a stage at a three star Michelin but they weren't doing pizza. The chef's name was Marchesi, and I went and spent a couple months in Italy, and that's where I first started getting into it. And when I was working with Lettuce Entertain You and when I was doing my consulting, I opened eight different restaurants that had a pizza oven in them. And I've done all kinds. New York style, the true Neapolitan, Roman style, the pizza bianca.

What's your favorite? Mine. Mine's a hybrid of just what I like in pizza. I think when you get into a description of pizza and you say thin crust, there's so many versions of that. I lived in Chicago for ten years, so I'm actually not a deep dish fan. Nancy, my wife, is from Chicago and she's a huge deep dish pizza fan. I like the flavors of it, it's just the crust is kind of cake like and I like a thinner crust and I also like char. I like hot oven pizza that has some char on it. And I like airy holes and kind of crispy, chewy.

How about toppings? I'm actually very traditional. When I was in high school I used to eat a lot of pizza, but when I was Italy I was in Florence and I remember going into this shop and they just had sheet pans of pizza, so it was just square. I guess you'd call it Sicilian style, but they didn't, because they were in Florence. It just had tomato and garlic and oregano and olive oil on it with no cheese and it was room temperature, but I loved that flavor. I've actually been quoted in Food & Wine magazine when I was the best new chef there and they asked me what would be my last meal, or something like that, and I said a greasy pepperoni pizza, with the grease dripping down my arm. But I'm very traditional. I like plain, what's called marinara, the seafarer's pizza which has no cheese. I really like traditional, I don't like crazy, creative toppings on a pizza.

Where do you like to go in Boston? I like Galleria Umberto. It's on Hanover and it's only open during the day. It's sheet pan pizza, and it's sounding like I like sheet pan pizza, but you know what? I like all pizza. The thing I like about it is you go in, you walk up to the cash register, and they just have a sheet pan full of pizza. Cheese is the only kind they have, and they just cut a square or as many squares as you want. It's good. I like a good taste of tomato. I don't like under-sauced pizza. It's nice and cheesy and tomatoey and warm. We just tried Pasta Beach, which I liked. And that's pretty much Neapolitan, the real Neapolitan. We like Sorriso, which is right around the corner from us.

Is there any kind of pizza you wish you could get in Boston but can't? My pizza. There's some places in New York that I like. Di Fara, which is in Brooklyn. It's this guy, he must be eighty years old, his name is Domenico DeMarco. He's been making the pizza there for about 50 years, so he's a legend. It's just great, New York style pizza. I was happy because in the same year, Nan and I went to eat Di Fara's pizza, because he's a legend and he's almost eighty, and I ate at Jiro Ono's, the 85 year-old sushi guy in Tokyo - you know the movie that's out, Jiro Dreams of Sushi - so in the same year I ate at two legendary places. But Di Fara, that style I like that a lot. What used to be Sullivan Street Bakery in New York had pizza bianca, the Roman style. I think there was somebody in Cambridge that was doing that for a while, but I don't think they are anymore.

Do you think you'll ever open another pizza restaurant? I don't know. That's a good question. But if I knew, I wouldn't jinx it by telling.