Share All sharing options for: Rosa Mexicano Is Now Open

The newest location of the upscale Mexican restaurant chain Rosa Mexicano is now officially open at 155 Seaport Blvd on the South Boston waterfront. Like many other restaurants drawn to the water, it's big, it's colorful, and it's Mexican. The menu is divided between starters like ceviche and tableside guacamole, tacos, which are available with tequila flights, and main plates like enchiladas de Jaiba, with crab, serrano and suiza sauce. In the drinks department, there's three varieties of michelada and a wealth of the cocktails you might expect, including mojitos and margaritas, some of which are available frozen. The Boston Rosa Mexicano is part of a mini-concept within the company which focuses on shareable plates and showcases produce from local farms. The restaurant says the Boston menu is similar to that of its Miami counterpart. Here's a look. 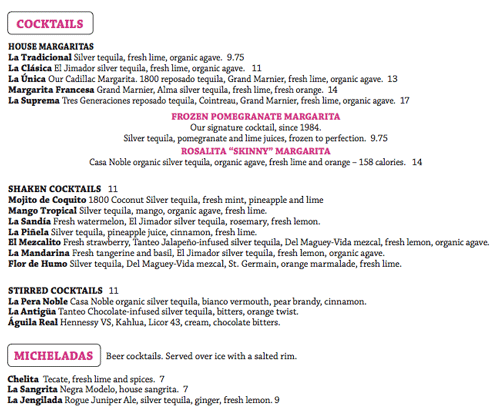 · All coverage of Rosa Mexicano [~EBOS~]