HiddenBoston's Marc H. on The Reality of Bad Pizza

Share All sharing options for: HiddenBoston's Marc H. on The Reality of Bad Pizza

Bad Pizza Power Hour continues with Marc H. of HiddenBoston on how bad pizza is real. 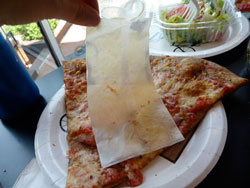 I can't tell you how many times I've heard people say there's no such thing as bad pizza, but this simply isn't true. Bad pizza can come in any category - from Neapolitan to Sicilian to Greek to Chicago-style, and so on. I find that Greek pizza can be particularly bad when it's not done right, and when I say this, I usually mean three-napkin pizza; that is, pizza that is so greasy that you need to lay at least three napkins on top of the cheese to soak up the grease. (This isn't to say I don't like good Greek pizza, and yes, there is such a thing--try the Greek pies at Nick's in Medford sometime, for instance.)

I won't mention the name of the place, but perhaps the worst pizza I've had in recent memory is from an upscale restaurant in a beautiful setting that generally has good food, but the pizza I had there one night was so covered in nearly-raw garlic that the taste was blindingly harsh, and basically inedible.

I like all types of pizza, though I probably eat Sicilian-style pizza the least because so much of it out there is bland and doughy. But places such as Galleria Umberto in the North End and Tripoli in Lawrence are spots that I try to get to as often as possible, as they do Sicilian pizza right.

I feel that the most important part of any pizza is the crust; if the crust tastes lousy (or has very little taste), it doesn't matter how good the cheese, sauce, and toppings are. One of the keys to the crust is the right amount of salt and oil mixed into the dough. If you've ever made pizza using dough from a mega-market, you may know what I mean--the dough often has little salt and no oil, so if you don't add it to the dough, the pizza will taste like cardboard.

· All coverage of Pizza Week [~EBOS~]
[Photo: One Smart Brownie]