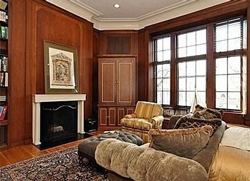 BEACON HILL - The newest million-dollar listing in the Flat of the Hill offers what you'd expect: oversize windows, three fireplaces, a big private garden, views of the Charles and the Esplanade, central air; all spread over 3,133 feet in a 3-BR, 2-BA triplex that starts on the garden level. It's also cozy psychologically: only two other units in the building at 37 Brimmer Street. But what caught our eye was the deeded parking space on offer as well—for $275K. We guess that if you're eying a $2,495,000 condo, what's 12 percent more, give or take.

SOUTH BOSTON - And the development boom goes echoing on. The Boston Redevelopment Authority approved the development of a 197-unit apartment complex at 411 D Street near the convention center in South Boston. The O.K. comes after the developers tweaked their plans to sooth the concerns of a neighboring condo building that worried that some of their views would be blocked. More importantly, we think, 411 D Street will include 26 so-called "innovation units," which are basically city-encouraged micro-apartments for the tech set.

HUB-WIDE - Average asking rents for apartments in Greater Boston were up 6 percent in the first quarter of 2012 over the end of 2011, according to a super-specific report from our pals at RentJuice.com. The average asking per square foot, too, was up slightly. At the same time, it appears that the It neighborhoods like changing-forever South Boston and its Seaport District saw apartment rents actually decline during the three months ending March 30, while those around universities like M.I.T. and Northeastern increased slightly (in the cases of Southie and the Seaport, the average asking rents were down 5 percent and 7 percent, respectively).

BACK BAY - The six-story building at 194 Beacon Street in Back Bay dates from 1862 and was converted to condos in 1974. It houses only four and this 3-BR, 3.5-BA triplex is one of them. It has hit the rental market for $12,500 a month. It's got 3,214 interior square feet but that's nothing: outside and in the garage there are another 3,000 or so, including what the listing calls a "a substantial Japanese garden." Done.