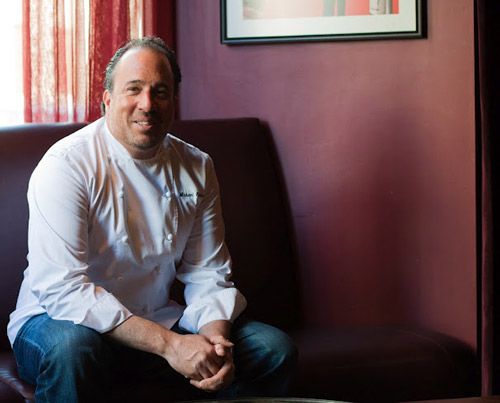 This time last year, Michael Schlow added Tico to his roster of restaurants, which already included Radius, Alta Strada and Via Matta. Esquire included Tico on its list of the Best New Restaurants in 2011, calling the Back Bay establishment "a big room of mismatched tables and a bar stocked with 124 different tequilas." In April, Schlow plans to add Happy's Bar and Kitchen to the mix. Here's the story of Tico's first year as told by Michael:

How did this project come together? Tico was something that I was looking to do for quite some time. This was a restaurant that I sort of had in my imagination that was based on trips that I taken throughout my lifetime, to places like Spain and Mexico and South America. When the property that was the Cottonwood Cafe became available I happened to be introduced to the gentleman who does the leasing by a mutual friend, and pretty quickly the deal was struck and we realized it was perfect.

What about the design? I had all of these images that I had pulled over the years, and we went into our architect's office. It had the images posted around the conference room, I had a portable iPod player with samples of the music I wanted to play in the restaurant, and I brought four portable burners and cooked everybody dinner with food that I thought would be emblematic of what we would be serving in this restaurant. They were able to see the images, smell it, hear the music and taste the food, and it made the design process really fun for everybody and really smooth and easy.

Why this kind of food? As a chef, what I'm usually looking for especially after work is a nice gentle balance of acid, salt, and chilies. Your palate's tired after you taste food all day long, and most chefs will tell you what they really want is a cold beer or a stiff drink and acid, salt and chilies. It just makes us happy and it sort of balances the end of the day. Also I wanted to take some of the techniques and flavor profiles that I had learned in visiting these countries and spin them in a different way than they'd done before.

How so? So nothing at Tico attempts to be authentic. Nothing. Even our tacos. When you got to Mexico and you'll see tacos de lengua or tacos de cabeza that are made out of the entire braised head of a cow: we don't have anything like that. Instead we've created our own version. As a counterexample, the complete opposite is at Via Matta. There we're really strict about the Italian dishes and our job is to perfectly recreate what we learned in Italy without interfering too much. With Tico, we've interfered.

How was the build? The space was antiquated: that restaurant had been there for 20 years. We thought that if we left the operational zones in basically the same spot that we would save some money over the long run, but the reality was that everything was so old that we had to do all new stuff. The project came in on budget and on time, which is always nice. It was a fairly painless project. Often with construction you can pull your hair out. Because it's difficult and it's not what I do for a living. I like to run the restaurants and cook in the restaurants, building them is the hard part.

How was the opening? The opening couldn't have gone better. I will say we had this one night early on where I thought "are we doing something wrong?" Because it seemed like it was taking us forever to get drinks out of the service bar, and then when we went to do the report we realized we had made 600 margaritas that night, so I really couldn't fault them for being slow.

How did the menu change over the year? There's 53 dishes on the menu, some of them just weren't popular and they were taken off and other ones just no longer fit or a product wasn't available, and we continue to try to develop dishes as the season gets on. We're pretty rigorous about how a dish gets on the menu. If we're going to replace a dish, we have to be replacing it with something that's better. It shouldn't be that we're replacing it for replacement's sake, or change's sake. It should be that we're replacing it because it's a better dish and ultimately the guest will have a better experience.

How have the reviews been? Over the year I'd say that the reviews have been really strong. You're always going to have your detractors. You're always going to have someone who likes one restaurant over another. When you hear a review that somebody really loves the restaurant you say thank you and you appreciate it. When somebody has negative things to say you have to look in the mirror and see if these things are true about your restaurant and about your staff and see what you can do to improve them so that people only have hopefully glowing things to say about us. That old adage of you're only as good as the last meal you put out really is true, and we live by that. There's too much competition to think that you can rest on your laurels. The first year was great, we want the second year to be better.

How was this opening different from your others? I still did what I normally do with openings which is focus on the brand new restaurant. I feel a tinge of guilt for the other restaurants because you don't get to spend as much time in them but when you have a brand new place, it's the new baby. With each opening you learn a little bit more and a little bit what not to do, and with this particular opening it went very very smoothly, but I think a lot of that has to do with really good hiring. Hiring the right management team, an excellent waitstaff and excellent cooks made our job a lot easier. For me this has been our best opening yet.

Does it seem like it's been a year? Oh god, no. I feel like we just opened a few weeks ago!

What would you recommend for someone who's never been? One is the crispy Manchego cheese for sure, and that's got a pomegranate honey sauce with it. I'd definitely get you to try the grilled octopus with potatoes, shaved celery salad and the aji amarillo sauce. Also the chorizo a la plancha, which is done with a chimichurri sauce and it's really delicous. Joshua Smith, our chef, makes that chorizo homemade and it is spectacular. There's one other dish and that's the cabbage salad. Most people look at the menu and think "aah, cabbage salad..." but it's a really, really delicious salad. It's very refreshing, made with basically a salsa verde vinaigrette. And our tacos are delicious.

What's in store for future? Thursday, Friday and Saturday nights we now we have a DJ, although it's not dancing, but when I go to London or LA or New York you'll see DJs in restaurants and bars just to give a vibe and a feeling to the restaurant. We just started that and it's been taking off really nicely, and the other thing that we have is a terrific Saturday and Sunday brunch that's just growing in popularity and we have live music for those. So those are more entertainment style things that are on the horizon for us, and as far as the menu we'll continue to explore and grow and hopefully provide really good food and service for everybody.

Any news on Happy's Bar and Kitchen? I'm actually at Happy's right now! We'll open at the end of April and it's looking great. It's going to be very urban, three meals a day, a really fun and funky place. I'm really excited for it.

For more One Year In posts published today across the Eater Universe, head over to Eater National.