Welcome back toThe Gatekeepers, in which Eater roams the city meeting the fine ladies and gentlemen that stand between you and some of your favorite hard-to-get tables. 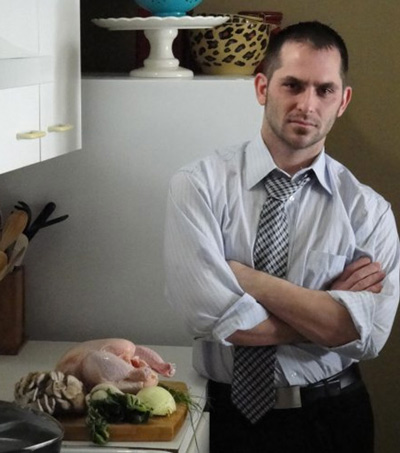 When chef Tim Maslow started working in his dad's diner following a stint as chef de cuisine at Momofuku Ssam Bar in New York City, things got pretty crazy at Strip-T's. But general manager Jonathan Fenelon is there to ensure that it all goes smoothly, and he's something of a renaissance man: in the summer, he supplies the restaurant with produce from his farm in Brookfield, and he's also putting his achitect training to work designing the restaurant's upcoming Brookline expansion. (Is there any other GM in the world that can say that?)

Eater spoke with Fenelon about how long patrons typically have to wait, his most unusual bribe, and what it's like to see longtime regulars rubbing elbows with the foodie set.

Someone shows up at 8pm on Saturday. How long's the wait? Certainly depending on the party's size it can be anywhere from an hour to two hour wait, without a reservation.

And how far in advance are people booking reservations? We have reservations being taken into February at the moment, although two weeks would usually be sufficient.

What tricks can people try to get in? Because of the size of the restaurant, it's certainly a challenge to have any parties larger than four. Larger parties would definitely have to give considerable notice for a reservation, but also because of the size of the restaurant, it's challenging any night of the week. Early or late is definitely the best time to get reservations, so during prime time like 7pm to 9pm, it's always going to be a challenge no matter what day of the week it is.

Do people ever offer bribes to get in? I've never been offered a monetary bribe, but once we had a cancelled reservation - and I was going to slide him in anyway - but someone handed me a box, and I didn't know what it was, and later on that evening I opened it and it was a bowl full of a weed. It was a little thank-you for getting him in. I thought that was kind of funny. But I've never been offered money. Lots of people offer booze, but that's not necessarily unusual.

Like to buy you a drink? Mostly industry people will just give you a bottle of booze. It's sort of an industry trick. You always bring the staff some alcohol to get that extra-special treatment.

Does that work on you? Not here. If I had more seats to move stuff around, maybe. I always like to take care of our brothers and sisters of the cloth, you know. But here it's almost impossible.

Do you have any favorite customers? I can't say that I have favorite customers. A really cool thing about Strip-T's is that our clientele is so diverse. We've built our client base for 26 years, so we have a pretty strong blue collar Watertown crowd, and then we have the really knowledgeable, young, hipster foodie crowd coming in from Cambridge and Somerville. They're a lot of fun, because then you can talk shop. And then you have some more established professional diners from Newton and Brookline. There's never a dull moment and I can certainly enjoy any one of them for different reasons.

Have you ever observed any interesting interactions between the old set and the new? The blue collar crowd is much more casual in the way that they dine. People love to look at what one another is eating, and they'll ask "What's that? Is it any good?" There's a lot of sharing that happens between tables, and I think for some people it's a little surprising at first, but then it's well received. People are like "Oh, you should try this - here, have some of my plate." And they'll actually pass it to the table next door. "Oh, how is that wine?" Because I get some kind of weird wines on our list, and they're like "Here, grab a glass."

We like to advocate for that sort of behavior here. This is a neighborhood joint and we love that. It happens quite a bit. One of the things about Strip-T's - and I worked at Craigie and Menton, so that's sort of my background - is that it's such a joy to work at a place where you can come in and get fish n' chips and a cheap beer or a Premier Cru Burgundy and do five courses. And those people are going to sit right next to each other. And that to me is sort of more of a neighborhood joint: the modern neighborhood joint, I think.

Where do you like to go when you're not at Strip-T's? I'm embarrassed to say this, but I eat out probably way too much. Every new restaurant I try to go to. There's few that I go to more than once. I just recently went to Puritan & Company, had an awesome meal there. West Bridge is always great to me. Coppa: I love the people there, the food is always great, it's in my neighborhood. I have a personal relationship with the people in the Gruppo - Barbara Lynch's restaurants - and No. 9 is a great spot for me too.

I know the menu changes a lot, but what's been popular lately? Because of the kind of talent we have in the kitchen, we've been able to change our menu every day now. But there's two items that are always going to be popular when they are on the menu, and that's the fried chicken and the banh mi. They don't always make it to the menu, but when they are, it's definitely going to fly. Recently, with the white truffle season, we did a daily pasta preparation with toasted spelt garganelli, white truffles and Burgundy snails, and we blew through that so quickly. I never would have thought in a million years that something like that would fly at a place like this. It's awesome.

Was that more of the Cambridge-Somerville crowd, or was everyone ordering it? When we have a blue collar crowd that's used to traditional sandwich shop-type items on the menu, they're not quite as adventurous, but those people are getting excited about some of the things that we're doing now, and that's sort of a testament to our service staff. Just making people feel comfortable about what we're doing here. Believe it or not, it's basically everybody.

What's the best seat in the house? I'm the kind of guy that always wants to sit at the counter that's overlooking the kitchen. I love that interaction. We call it seats 31 and 32, at the counter - those are my absolute favorites. But some people love the corner table, and it's the mafia table, table 14: you can oversee everything that's going on in the dining room and everyone coming in. It sort of depends on your meal, I suppose.

Anything to share about the new space? It's going to be a beautiful space. It's been a dream of mine for quite some time. This epitomizes what I think a dining experience should look like, and I'm really excited for it. I can't wait to show it off.