The Beehive's Bertil Jean-Chronberg on Creating a Vibe

Share All sharing options for: The Beehive's Bertil Jean-Chronberg on Creating a Vibe 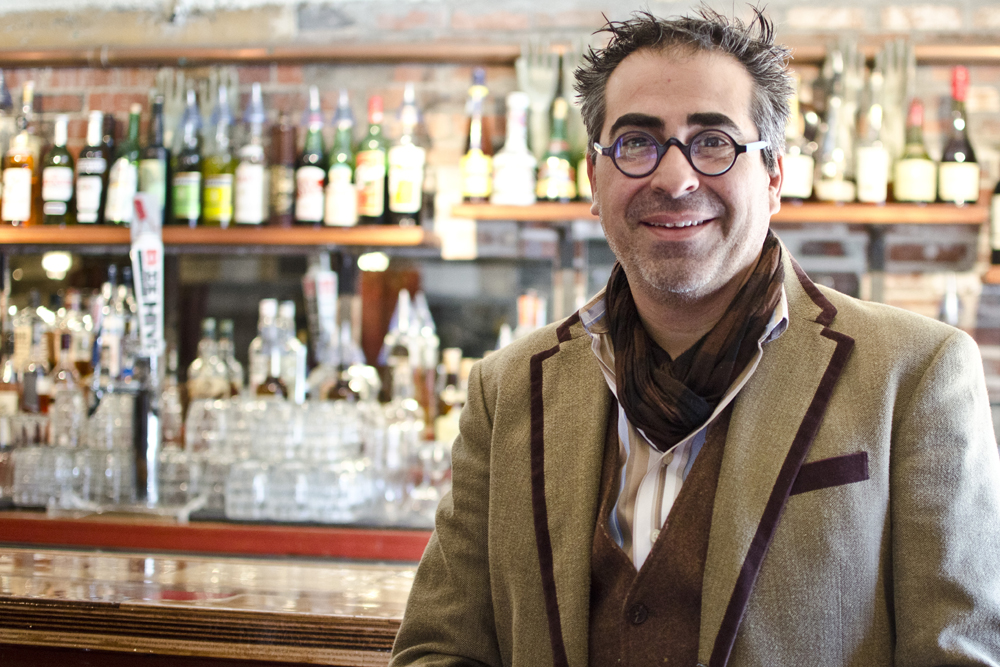 Construction of The Beehive's eclectic, artsy, multi-level space took two years, and it has now been open for close to six years, quickly becoming an institution and gaining a great deal of acclaim both as a restaurant and as a music venue. On any given night, trying to get a table without a reservation can be difficult or impossible. General manager Bertil Jean-Chronberg, who has been involved with the restaurant since the beginning, sat down with Eater to discuss The Beehive's Parisian inspiration, the importance of making a reservation, accommodating a guest who wanted to publicly beg his girlfriend to stay in the country, and more.

When is it busiest at The Beehive? I try not to pat myself on the back and be pretentious, but we are busy seven days a week. Because we have music performances every night, we can't really say when it's a peak time; during the week, it depends on who plays. But don't forget we are a restaurant with live music. We are not a club. We are not a music venue. We are not a performance hall. We're busy in the evening with people coming here for dinner and no music, and we are busy later with people who want dinner and people who come to the bar and want to enjoy the music, but our usual peak times are definitely like everybody - Thursday, Friday, and Saturday nights, and weekend brunch.

If someone came in on a Friday night without reservations at 7 PM, how long would they have to wait? [Laughs.] If we haven't had someone just cancel, we will seat them at the bar, which will probably have a 30- or 45-minute wait. With no reservations on a Friday and Saturday, you probably don't have a big chance to get a table. The best way is to make a reservation - and the more you make your reservation in advance, the more options you have for times. We are now generally taking reservations two or three weeks in advance. Like this Friday and Saturday, I'm probably booked already, except the cancellations I will have. The restaurant already has 400 reservations.

How far out have you seen people book? A year. It's terrible. No, it's not terrible, it's great. [Laughs.] We tried to build an institution, and it became an institution way faster than we were expecting. A lot of people come from other countries and were here before and know they're coming back in six months or one year, so they already booked a reservation to come back because they enjoyed their time. We have a lot of people propose here or have their wedding here, and these people tend to reserve three, six months or one year in advance. And a lot of the year-long reservations are private parties. We just did a private event last week, and at the end of the event, the guest requested that we book them again for next year. That happens a lot.

Does anyone offer bribes to get seated faster? Oh, bribes at the door, bribes at the host, bribes at the manager - we don't accept money here. We don't believe in greasy money. We also don't have a cover charge. The first to make a reservation is the first one in - but you can only make reservations for a full dinner, not just apps and drinks. We also have a VIP card. If guests are regular here, they will receive a VIP card, which gives them the chance to break the line when they come in. That's the best way. Not money.

Any non-monetary bribes offered? Oh yeah...and we won't talk about it. [Laughs.]

How would you describe the clientele? We are very eclectic in our clientele. The concept of this restaurant is that we've created an artist studio based on an artist studio in Paris named La Ruche (The Beehive), which was created in the 1920s to give a home to all the artists who came after the war. We're talking about painters, musicians, writers, poets. People from all around Europe and beyond were there, and we try to reflect that here. So color, religion, sexual orientation, money or no money - it's all always here. We're an art studio - we change our art, by very serious artists - every three months. We encourage a lot of artists to be here, so we arrive at a situation that's very eclectic. We can have a table with two guests in their mid-60s on the way to the theatre next to a table of some funky artists from New York or from Boston in their 20s or 30s. That's what's fun here. We're not driving for a very specific look or anything.

What's the weirdest request that you've received? Oh...we have some weird requests every night. People want to talk on the mic on stage, all sorts of things, but a weird request I accepted was a gentleman with a girlfriend who was going to leave to go back home to Korea. She bribed him that if he would make a public announcement to beg her to stay, she would stay. He came to see me and asked, "Can I step up on the chair? I really need this girlfriend to stay in Boston." So I accepted. It was a Saturday night, and the restaurant was full. He was sitting at one of the small tables close to the stage, and out of nowhere he stood up on the chair and yelled to everybody to beg her to stay. It was very funny. The point is, no matter that he did it, she left three months later. But he comes here often. That was four years ago and he's here like every week, so it's very funny.

What's the one must-order dish? It's very difficult to answer that because we've lately been ADD with our wines, beers, beverages, and food. We change some items on the menu close to three times a week because we working only with small, local producers, and we are very careful what we buy. We do have some menu items we haven't moved because they became institutions of the house, like the Moroccan cigars appetizer, our oysters and seafood platter, the short rib grilled cheese. We have a lot of meals that are related by the story of La Ruche in the 1920s. If these artists lived together, what would be on the tables? We also believe in very rustic, local food from the Middle East and Eastern Europe; the pierogies are classic here. Two weeks ago I had a student from Harvard, she's from Ukraine. Her family came to visit, and she booked the left side of the bar for fifteen people for two hours just to come try the pierogies, and these people live in Russia and Ukraine, and they all said our pierogies are incredible, so that's a classic dish.

Any recent celebrity sightings? In general we never say who's coming here, just because it's a part of how I work - I want celebrities here to feel very comfortable and not intrusive. But in general, if there's a movie filming in Boston, we'll see the people here. The Bruins are here all the time, and when they go play somewhere else, all the wives come in here. We have players from the Celtics here often. Actors, very wealthy people. Deval Patrick, Mayor Menino. They know we know how to make them feel comfortable, like real people - not the center of the attention.

What do you like best about The Beehive? Everything. It's like saying what you like best on your baby; I think you like the entire baby. It's a vibe here, and I work very hard to have this vibe. The last thing I want is another dull restaurant. I think what I enjoy most is a guest leaving and saying, "Wow, we had fun," not just "Wow, the food was good" or "That's beautiful," but the full package. The service, the cocktails, the food, the music, the ambiance, the energy, the design. Everything. I love every little corner.