Clio's Todd Maul on Some of His Favorite Bartenders

Share All sharing options for: Clio's Todd Maul on Some of His Favorite Bartenders 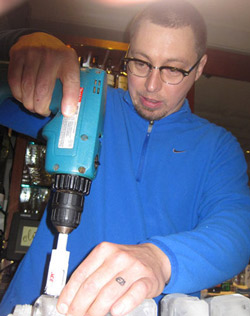 When you hit a certain level of intrinsic talent, it becomes kind of personality driven for me, and two guys that come to mind are Beau Sturm over at Trina's and Joe McGuirk. They kind of embody hospitality. If you go in, they put you at ease and it makes you feel welcome. And they obviously know that what they're doing is head and shoulders above what a lot of other guys are doing.

You can be really good at your job, but some people can come off as kind of snooty or arogant, and to me the second part of bartending is really being hospitable; that to me is really the driving force in anybody who wants to be a bartender. That's how you build regulars.

I've gotten to know Beau in the last couple of years, and my take on his ability is that he's so easy going he just makes everybody feel like he just got off the phone with you. And maybe you haven't seen the guy in two weeks.

Joe McGuirk, if I was to be perfectly honest, I've ripped off some of his bartending style just because I'm so enamored with it. He's part game show host and part comedian, but if you get on the wrong side of him he puts you straight pretty quick. As a younger guy when I may not have been as outgoing, I saw someone like him who really has a command of what he does, and in terms of straight hospitality and being a personality behind the bar, he's somebody I paid a lot of attention to.