Pigalle to Customer: 'You Must Enjoy Vomit'

Share All sharing options for: Pigalle to Customer: 'You Must Enjoy Vomit'

When a disgruntled Pigalle customer took to the restaurant's Facebook page to complain publicly about her Thanksgiving meal rather than calling the restaurant or saying something while she was there, Pigalle bit back hard. The customer began:

"Really horrible pumpkin pie on Thanksgiving!! Wow. I don't have a clue as to why you would think that throwing pumpkin chunks into a cold pre baked pie shell and then covering it with a cream sauce that literally tasted like vomit. { I am very serious!} and topping it off with whipped cream that was runny would in any way be something that can be called pumpkin pie?"

She continued on to say that everything was awful, her holiday was ruined, and she would have rather given the $200 she spent to the homeless person outside. She ends with a cheerful "Merry Christmas!"

In a series of angry responses apparently from Chef/Owner Marc Orfaly, Pigalle opened up with a "hey sandy , go f*** your self! if you have any questions on how to proceed, please call me at 617 *** ****." It only got better:

"you must enjoy vomit you bitch if you know how much it tastes like. secondly, if you had any clue about eating out, or balls, you would of informed your server you were unhappy with some thing, while at the restaurant , not on face book............again f*** you, dont come back"

Then Orfaly switched to a mocking offer to give back her money ("sorry if you can't afford it , and i don't want your money :)" and ended with a classy fat joke:

"Also Judging by how fat your face looks , you most Likely shouldn't be eating anymore desserts anyway Sweet pea xo"

Not content to let the exchange sit mostly unseen as a "Recent Posts by Others," Pigalle posted its own separate message on the page addressed to "Pigalle fans" ranting about how "in this day and age there are still uneducated, unintelligent, unpolished human beings out there that still go out to eat." The meat of the message:

"If anyone has ever had a problem at any restaurant , food or service , you complain or bring it to their attention , at the restaurant , not on someone's face book page. This is a ignorant and disrespectful way of carrying ones self when in a public restaurant ( or I should say out of one) , and just shows this persons inexperience to dining and behaving in general ."

A fair point, but perhaps Pigalle should follow its own advice and not publicly tell customers to go f*** themselves.

The posts in full: 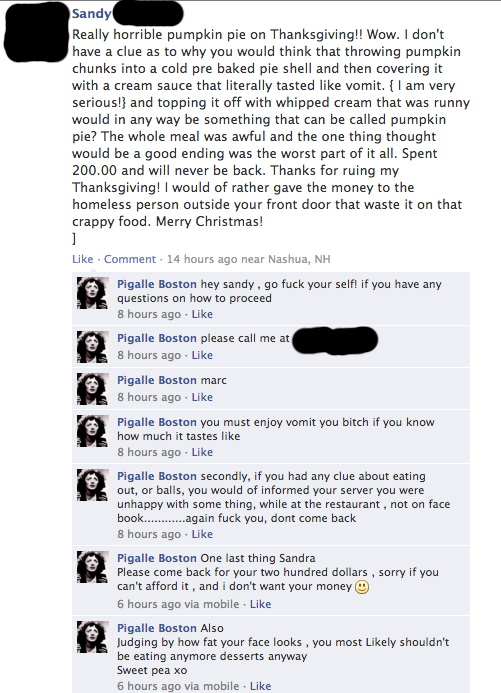 UPDATE: The saga continues. Earlier this morning, Pigalle deleted its original responses to the customer's post as well as its own post, spurring the customer to continue posting. Pigalle finally chimed back in, still not in a very friendly way:

UPDATE 2: Grubstreet Boston confirms that yes, it was in fact chef/owner Marc Orfaly posting on Facebook, not a hacker or disgruntled ex-employee, and Boston Business Journal reports that he's taking a breather from Facebook for a bit but will likely be back with a real apology soon.