Presenting your Friday dose of Curbed Cuts, the pick of this week's neighborhood news from our sister site Curbed Boston: 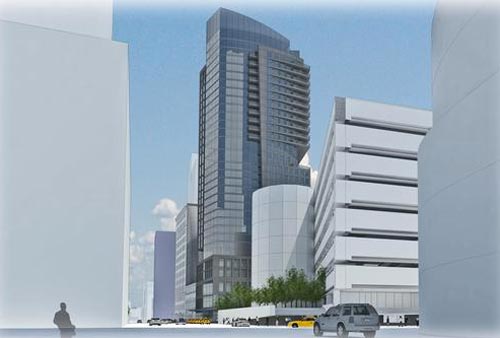 BACK BAY - 'Tis official: the Boston Common Hotel and Conference Center at 40 Trinity Place will likely be redeveloped into a 33-story building with condos. The units will be complemented by all the whiz-bang of a four-star hotel, including conference rooms and a gym. More importantly for an apartment-starved Boston, the building's 142 condos will range from studios all the way to family-friendly three-bedrooms.

__
BROOKLINE - Our pal Sherlock Homes deduced where Tom Brady and Gisele Bundchen are likely building a new house in Brookline. It would be on a 10-acre lot on Lapland Road one-tenth of a mile from Patriots owner Robert Kraft's place.

__
BEACON HILL - The former artist studio at 70-72 Mt. Vernon Street, lofty enough for five bedrooms and four and a half bathrooms, hit the residential market for the first time in late June for $4,750,000. The 4,035-square-foot spread is now $755,000 cheaper, one of the biggest price-chops of this dwindling year. It needs renovations, so the new $3,995,000 tag is just the tip of the financial iceberg.
__
BACK BAY - One of the biggest new towers pitched for Boston in a long, long time is on hold. The developer of the 47-story, 318-unit condo addition to Copley Place says it wants to reevaluate the project, giving neither design or financial reasons for the halt. The city approved the Copley Place tower one year ago this month after vociferous opposition because of its scope.