Presenting your Friday dose of Curbed Cuts, the pick of this week's news from our neighborhood-savvy sister site Curbed Boston: 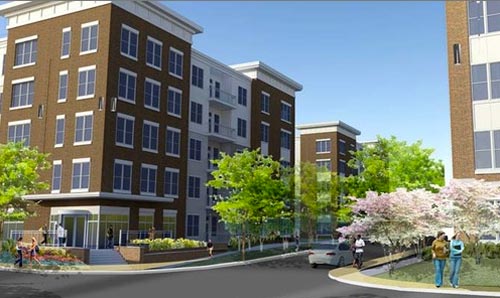 [The Atmark in North Cambridge via developer Cabot Cabot & Forbes]

NORTH CAMBRIDGE - At least four new projects are going up in the vicinity of the Alewife terminus of the Red Line. These projects mean 1,297 new apartments for an area that, shall we say, is not necessarily one of the Hub's most thought-about residential neighborhoods. The estimated tenants in these buildings by themselves could add at least 1.32 percent to Cambridge's population, nothing to sneeze at given the city's 0.83 percent population growth from 2010 to 2011.
__
HUB-WIDE - As part of our epic Renters Week 2012, we ran down the cheapest and the priciest areas to rent a Hub apartment right now. The takeaway: it's expensive and it's getting more so.

__
BACK BAY - We had a Craigslist Power Hour and uncovered this Back Bay parking space asking $85,000. The seller assures everyone it's "a great investment, the space pulls in over $300 a month in rent."
__
BEYOND THE HUB - The median monthly rent in September was $3,136. We decided to hop the commuter rail and see what a tenant could get for less than that at a dozen locations beyond Boston and its immediate environs. We went to the shores of Plymouth and the hills of Andover, to Sudbury and Salem. What we found will either shock or pleasantly surprise you.